August 12, 2012 by CouesWhitetail in Hunt Stories, Rifle Gallery with 1 Comment 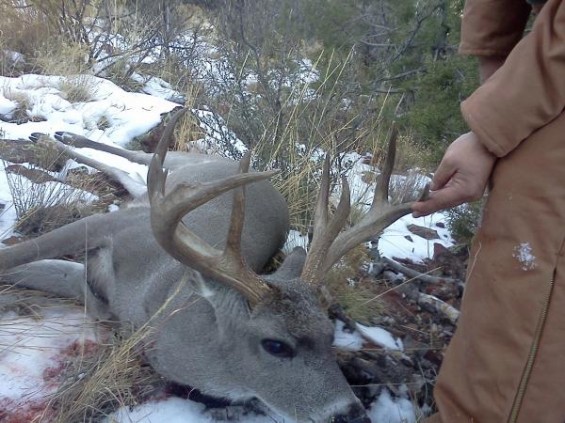 This hunt started a long time ago.  In 1993 an antler buyer stopped in my home town.  I had a few to sell so I stopped.  After selling to him we got in a conversation and he showed me a few photos of a little deer with more mass than I had ever seen on any deer.   He called the little deer a Coues.  I had never heard of them.  We talk and ended up making a swap.  I would take him on a lion hunt and he would take me on a Coues hunt.

I applied that same year and got a tag.  We went hunting and I saw one buck for just a glimpse.
That hunt started a long time friendship that has led me on many hunts with him and my brother.  After that hunt, I could see that the fire power I had wasn’t going to get it done.  So for the last 18 years I have spent most of my free time looking for better optics, better rifles and that one little deer.  From 1993 until now my brother and I have had a few tags and have taken some nice deer but those are for another time.

Friday morning found my brother and me setting on one of our spots we had glassed from many times in the past.  We spent all day at that spot seeing a few does and a small buck.  We headed back to the house to plan the hunt for Saturday.  After lots of BS talks and looking at the many nice mounts on the wall it was set, we would hunt a spot that my brother and I had both taken bucks from in the past.

As we got close to where we wanted to hunt I could see a camp. I couldn’t believe that someone was camping there.  We walked over to the two young men and talked with them.  Nice fellows, but I knew there was no way we could hunt that canyon and feel right so we decided   to go to a spot close by.  As we got close to the parking place I could see someone was in front of us.  I couldn’t believe it.  We took the other road and ended up where we had hunted the day before.

I just got to my rock, took off my pack and put my binos up and there was a buck 850 yards.  We hurried and got the spotting scope up. The buck looked like a 95″ buck as we sized up the buck another buck showed up.  It was a big high horned 2 point with long main beams that turned down on the ends.  We talked about the two bucks and watched them go in the thick brush.  We knew a shot from there was not possible as the wind was blowing 20-25. We decided to just set on the bucks.  After a while, the 2 point buck left going down the canyon leaving the other buck.  We looked for most of the day but the 95″ didn’t show.  About 4 pm I told my brother let’s move around to the back side of the hill we were setting on.  We glassed for a while not seeing much I moved to another point just 30 yards over to glass a little basin.  I spotted a buck and called my brother over to look. It was another 2 point with brow tines.  Not what we were looking for.  All of a sudden I hear,” got one”.  I looked to see where he was looking.  As I put my binos up, I could see a big bodied deer with its head in a tree.  I scrambled to get the spotting scope on him.  It’s a shooter.  Maybe 120″ we need to kill this buck.  My brother and I had talked.  The deal was the one that spots it shoots it.  I ranged it and he set his turret.  He said I can’t find a good spot to get a rest.  I told him my bipod was in my pack. Use it.  I watched the buck while he got ready for the shot.  It seemed like a lifetime went by.   I watched the buck rake the tree and getting bigger by the second.  I didn’t say much I didn’t want to pump things up any more that they were. I was hoping the buck wouldn’t move. “Are you ready”, I asked?  Yes, just about he said.  I can’t see him the sun is in my scope.

He said, “Ok I’m on him”.   “Ok”, I said I am on him.  He shoots, I see the bullet hit just in front of the buck.  I told him the elevations are good 12″ to the left.  I told him hold on his flank, there must be more wind than we think.  He shoots 2′ to the right. I told him, hold where you want to hit.  About then the 2 point goes over near the big buck. I watched as the bigger buck turns and drives the 2 point out of the basin in to the thick trees.  Man now what?  We glassed the spot I last seen the buck for what seem like hours.  There he is in the one small opening in the trees.  Ok I got him.   My brother shoots.  Just behind the buck.  My brother said,” what is going on, I can’t get it done”.  My brother then did the thing that only a person of his quality would do.  He turned to me and said why don’t you shoot?  I was humbled by what he said.  I moved away from the spotting scope to my rifle knowing that this was a buck of a lifetime and my brother was giving me a chance to kill a buck that anyone would die for.  I know that he really didn’t know just how big this buck was.  After trading spots and my brother looking though the spotting scope he really saw what this buck was.  I am sure if he would have shot a few more times the story would have a different happy ending.

As the sun crept down to the skyline I knew that we were getting short on time. The buck was not showing himself.   We glassed until we found him.  I ranged him at 707 Yards.  I told myself you have to get it done.  I was thinking, all the time at the range and all the time working up loads. The rifle is ready you, know how to shoot.  This is your chance.  I put the cross hairs in the middle of him and let it fly.  My brother said just in front of him.  Hold on his penis. “Penis?” I asked. “Yes penis” was the reply.  “Ok”, I said you on him?  He said yes.  I knew this would probably be the last shot as it was getting late and if the buck moved again I would have a hard time finding him in my scope.  I placed the cross hairs as I was instructed to do.  I took a deep breath and put my finger on the 1 pound trigger and sent the bullet the buck’s way. The recoil took me off the buck but I didn’t need to see.  I heard a big howl and my brother told me he is down right there. He is stone dead.

It may be hard to believe, but no high fives, no celebrating, just a long silence from me and the same from my brother.  We looked at the buck though the scope.  He was dead.  We looked at each other and I said “we can’t go down there tonight”.  The route we would have to take would be tough and nasty. We decided to leave the spotting scope on the buck return in the morning and get the buck out.

Saturday night December 10th, 2011 was the longest night of my life.  Did I stun him?  Could he get up and be gone, will the coyotes get him?  These thoughts kept going through my mind.  We returned to the spotting scope the next morning.   I looked down where the buck was and I was able to put a big smile on my face.

I believe that things happen for a reason and the events that day led us back to the spot we needed to be.
I need to thank my hunting partner, best friend and brother for giving me the chance to shoot this buck. I wasn’t the one that spotted the buck.  He had the right to shoot until he had no more bullets and use my gun to keep shooting, but that’s just not him. There may only be one bullet in this buck but two brothers killed a trophy of a life time from that rocky point.