June 2, 2012 by CouesWhitetail in Shed Hunting with 0 Comments

“All these shed came from the same buck?”

If we had a dollar for every time someone has asked this question, we would have a new storage shed for all our antlers! Some faces stare back in disbelief when we tell them deer loose or “shed” their antlers from year to year. Then they are told that antlers can be tracked to a specific buck from one year to the next. They look at us like we are nut cases telling “fish stories”. I was surprised this even to be true at hunting expositions and trade shows. Next comes… “Well, then these deer must be in a zoo or penned up somewhere.”

“No,” we say, “the sheds are from public land. We just don’t have any soles left on our boots!”

Shed hunting requires a lot of time, patience, hiking, and dedication. Did I mention hiking? I should emphasize—a LOT of hiking! Then comes the knowledge of how to tell what you have got once you have it. An antler is not, just something “cool” to find. It is a piece of a puzzle. The puzzle being that of the life history of a buck.

First, find an antler. Then look around. The other side is sure to be… somewhere. Knowing the general area that the certain type of animal’s habit is a good start. For example, let’s say you just found a Coues whitetail shed. Well then the other side should be within a one mile radius. Start “zig-zagging”, look under and in every bush, tree, and rock! Have I mentioned …. Do A LOT of hiking!!!

You just found another shed antler! Way to go! But… Does it go to the same buck? Is it a match from the same year? Is it to a different deer? Or is it the same deer, just the year before? Can’t tell? Look at the pedicle of the antler. This is where the antler base would have been attached to the deer’s skull prior to shedding.

A pedicle imprint is a buck’s fingerprint. NO two are alike. One may be concave, another convex, one may have a small dimple in the right corner, another the left, and so on, and so on. Each buck will have a different characteristic. However every antler coming from the same buck will have basically the same pedicle imprint from side to side, year to year. Another characteristic to also confirm is the burr. The circumference of the burr may change from one year to the next, but the texture around the base generally remains the same. Next check the spacing from the burr to the eyeguard and the eyeguard to the back tine, this will also usually be similar year to year. One thing you can never rely on is the number of tines and their lengths.

Having sheds from year to year helps determine, in our best educated guess, how old a deer is and if he is at his prime. We usually try to harvest bucks between six and eight years of age. Antlers of younger bucks have not reached maturity and older bucks tend to decline in size after their prime.

The buck we are going to focus on is nicknamed “Grand Dad”. The first shed we have off this deer is from when the buck was one or two years old. My husband, Dan, believes this buck to be a yearling at this time due to the size of the burr. The set of sheds from year 2 is missing. This can be decided by the dramatic increase in circumference size of the burrs from one year to the next set of sheds that we have. Normally, in Dan’s experience, Coues bucks grow approximately 1/8” in diameter from year to year until they reach their prime. At this time they generally will remain the same for a couple years until they get older, at which point they can actually decrease in size. The pairs of antlers from year 3 and year 4 are those of a buck most trophy hunters would look down their noses at and harvest on the last day of the hunt as a “cull” buck. They would be thinking they did the herd a favor by not letting this buck’s genetics spread. HOLD ON!! Don’t pull the trigger finger yet! Year 5 the buck is just about getting there and year 6 is a little bigger yet. HOLD ON! Year 7 he is looking real good, grossing approximately 118 0/8”! But wait! Here comes year 8! The BUCK EXPLODES! He has picked up mass, beam length, and tine length. The beam of the buck’s right antler is 22 1/8” and the left antler beam is the same. The monster eyeguards are 7 0/8” and 6 6/8”. The first circumferences are 4 7/8” and 4 4/8”. With an estimated spread of 16”, this buck would gross 126!!! We have waited long enough! Now is the time to harvest this buck. He is at his prime. He is just a late bloomer! Could he be found during the hunting season? NO!! At year 9 he sustained an injury on his right antler while in velvet. This caused a unique “freak of nature”. However this did nothing to take away from this buck’s gross score. His “spike” side alone grosses 51 3/8”. He also gave us his best shed this year, his left side grossed a total of 59 1/8”. So even at nine years of age he still scored an estimated gross of 126!!

At year 10 his mass decreases and he starts to do those crazy-wavy tines that older bucks do. But even though this buck has lost mass, he still grosses a whopping 126!!!!

So next time you are faced with just taking a buck for meat or “culling” a buck on the last day, take a good hard look before you pull the trigger. Picture yourself with the same buck two or three years down the road…posing with that mature, one of a kind trophy….Picture how much bigger he may be…And picture how much bigger your smile will be. The memories of that hunt will stand out forever in your mind and follow you wherever you go. While reminiscing, don’t forget to pat yourself on the back for letting that buck go when he was younger, for letting the buck shed two or three more years of sheds, watching the buck grow to trophy class. 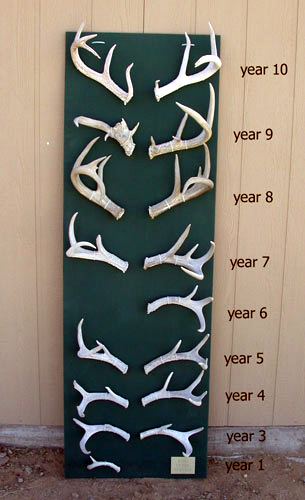 This photo shows the antlers from the buck in the article.

The photos below are from some other bucks, but show the progression of antler growth over time. Consistently finding sheds from the same buck for years, takes a tremendous amount of work and dedication. Dan and Monica King are serious about antlers! 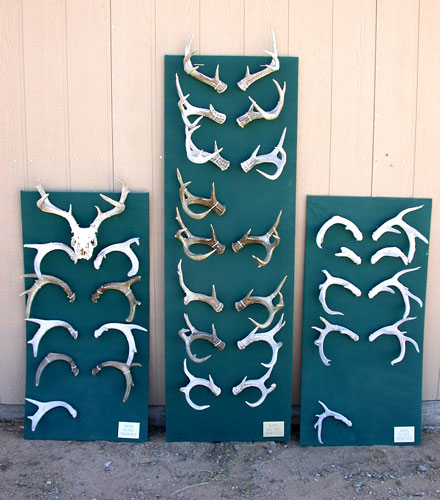