by Rich Thompson aka Coues Addict

The beginning of my story begins some 30 years ago, back in my high school days. I was hanging out with my girlfriend Valerie; over at my house.

She said “Hey, let’s go see if my Dad got home from his deer hunt”.

So we walked over to Val’s house, which was only a block away, and she said “Look, daddy got a deer”. We walked up to the garage to check out the buck.

Val’s dad, Joe, had just come home from a Coues deer hunt in Arizona and had gotten a nice buck. Man, I thought that deer was awesome. I had never hunted deer before, and I didn’t know it then, but I was hooked on Coues deer. Up until then I had only hunted birds and small game with my brother George, my friends and Val’s brother Mike. Mike and I often went out hunting, and as I got to know him better, I got know his sister even more. I was falling in love, and in 1975 Valerie and I were married. Shortly after getting hitched, Val and I started camping and deer hunting together; mostly mulies. I had two really good teachers, my father-in- law Joe, and Mike. They really taught me how to hunt deer, spot game, glass, track, pack, and about game care. I loved all of it, yes, even the packing! I killed several deer over the next ten years or so, nothing real big, but all the while Mike kept saying “Next time, try to hold out for an older animal. If you shoot the little ones, they can’t grow up to be big ones”. I was definitely upgrading from small forkies, to 3 points and some 3×4’s, but nothing really big.

Around 1980, Mike married his high school sweetheart, and moved back to Arizona where his family was originally from. He started hunting Coues deer pretty seriously and around 1989 or 1990 he called to tell me he had just gotten a nice Coues buck. He had an official Boone and Crockett scorer come over to measure it; with a gross score of 138+ inches. Mike’s buck is a non-typical 8×11 with a drop tine on both main beams. I mean, totally awesome! Well, ever since I first saw Mike’s big buck I really started trying to kill something nice and put in for December hunts.

In 2003 I was drawn for the December hunt in unit 32. I was really excited. I was thinking to myself “Maybe this is the year. Third time’s a charm – right? I gave Mike a call to let him know about the good news. He did not get drawn, but said that he could take some time off work to go with me. Unfortunately, I could not make the first weekend of the hunt. My plan was to leave on Thursday the 18th and hunt Friday, Saturday, and Sunday. If no big bucks showed, I would go back on Christmas day, later in the evening, to hunt from the 26th thru the 31st. I stopped in Mesa, on the 18th to pick up Mike, and we headed off to our hunting camp.

We pulled into camp around 1:30 am, and decided to sleep on cots that night and pitch my big wall tent in the morning. We were so tired, we slept until 6:30 or so and then made camp. I cooked a huge breakfast and we headed out around 9:00 am. This just seemed weird because usually we were up by 4:00 am. This getting older really makes a difference in our hunting habits, and we were laughing about the situation. I glassed a small buck right from camp just after we ate.

By noon we were 2 to 3 miles back from camp and seeing lots of does, but no real buck action. We kept pushing to get to one ridge that I had been wanting to glass from. When we finally got there, we saw more does – a good thing to remember if I come back and the rut starts kicking in. Mike spotted a small forked horn, bedded down, not 300 yards up from the does. I told Mike I wanted to get to the far ridge before dark because I wanted to glass the other side. He said, “Ok”. I had just put my tripod and big bino’s in my pack. I gave it one more look with my little glasses. I saw a huge bodied deer in the rim rock to the North of us. I told Mike, I thought it was a buck. He still had his spotting scope set up and after spotting the deer he said it definitely was a buck. I quickly set up my 15’s and looked over the buck. I got out my rangefinder and ranged him at 640 yards. I told Mike I thought he was coming to water and that we should wait and see what he does. Mike said he could see some nice mass and at least 4 points on the buck’s right side, later he could see 5 points on the buck’s right side. I couldn’t believe it, on the first day of the hunt we had already spotted a good buck.

We decided to wait and see what the buck would do. He was coming towards us and the wind was perfect. The trail he was on dropped out of sight. I still thought he was coming to water, which was directly below us.

“I think you better get set up for a shot”. Mike said.

About two minutes later the buck came into sight, still on the same trail. He stopped under a big yucca and we really took a good look at him. He looked like he had all kinds of trash on his rack with pretty good mass. I ranged him again and he was at 296 yards.

Mike said, somewhat surprisingly, “Are you gonna shoot him or what???”

“I would!” said Mike

“You would, really? It would be nice, to not wait until the last day because it puts so much pressure on me, but it’s our first day Mike!”

“You might not find a buck this nice when you come back after Christmas.”

“Ya’ know, your right. I guess I’ll shoot him, he will definitely be my best Coues buck”

I got into my gun and made sure that I had a really good rest. Then, I sat back up.

“What are you doing?” said Mike

“I’m just taking a deep breath. I don’t want to blow this one.”

“OK good, now, where are you gonna shoot him? Oh, and take your time”

“I’m shootin him right in the shoulder. We don’t want him to run off, it’s gettin’ late.”

“Oh cool, I want to watch the impact through my spotting scope.”

I think Mike was more excited than I was. I got back into my gun, put the crosshairs right on his shoulder and squeezed off my old .270. <

I was pumped! When we got up to him we were both pretty excited. The buck’s neck was huge and he had 6 points counting eye guards on each side and a couple little stickers. We both thought he weighed over 100lbs dressed; but that’s just a guess. We got back to camp pretty darn late, (after me falling in shin dagger twice) but it was worth it. Even the pack out was a “labor of love” if you know what I mean.

Mike had an archery tag and we stayed through the weekend. We saw three or four small bucks and one nice buck starting to chase a few does. We also found a lion kill (3×3 with good mass and an outside spread just over 19”). We even tried a little, rattling, with some interesting results.

When I got home I rough scored my buck at 111 5/8” gross non-typical, all in all, a nice hunt. Val thought it was a really cool buck and that made me feel good. It was just a little shorter hunt than I hoped for, but Thank GOD I didn’t have to wait until the last day! Ya’ know, I truly love being out hunting Coues deer every fall, but the truth is ya’ gotta be at the right place at the right time. It’s not all skill, but tons of luck, lots of patience and just plain fun. For me, it’s about doing the things ya’ love with the people ya’ love. Oh, and Mike if you read this, Thanks for all your help. 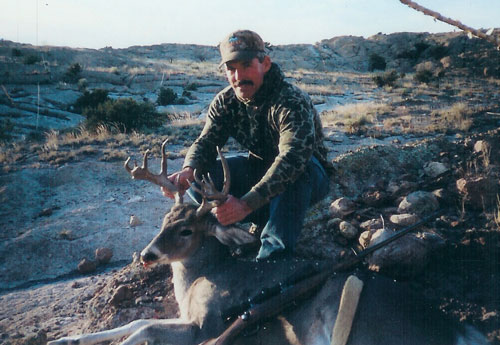 Rich’s brother-in-law Mike with Rich’s buck. This photo shows a good side view of the antlers. 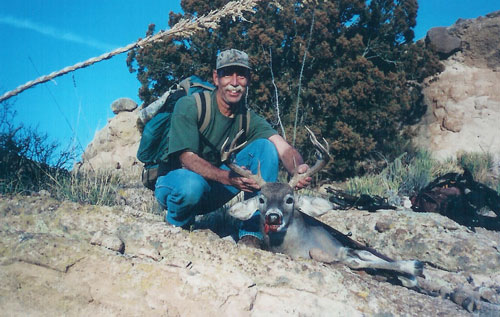 Rich with his great buck. 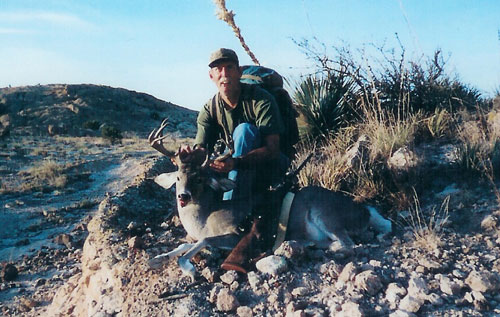 Check out the body and neck size on his buck. 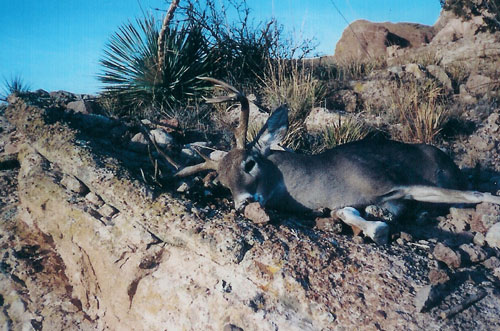 In this photo you can see the size of the buck’s neck pretty well.