January 8, 2013 by Drake in Archery Gallery, Hunt Stories with 2 Comments 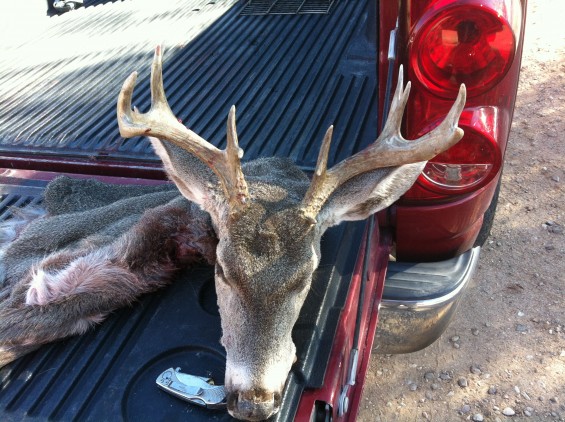 I killed this buck today in 34a around 10:30 this morning. What happened was I started the day and glassed up seven does right off the back no bucks so I ended up driving around another hill and glassed up a nice 3×3 I was going to start stalking him until he started randomly running then I saw the doe he was chasing down the hill. I ended up putting a stock on him but never could get close enough so I went to another location I was familiar with ended up glassing up the buck I killed so I started walking up a wash but as I get in it about 50 yards I see a does on a hill and she’s looking Down so I walked around the hill some more and there was a nice buck about 100 inches. He was rutting that doe. I had him at 50 yards but never gave me a shot. I kept chasing him around and that doe but he eventually ended up running up a hill. So I went back to find this buck with split tines and I could end up finding him so I walked back to my truck and ended up jumping a spike out then three doe then there goes my buck he stopped at 61 yards broadside I pulled back as shot heard it hit and watched blood pour out of him I knew it was a good hit. I let him sit for 15 minutes. I was too excited to wait any longer so I trail him he ran about 25 yards and died. I had him a 4×4 with double eye guards on one side and triple on the other. The best bow kill I have. He’s about 88 inches maybe 90. 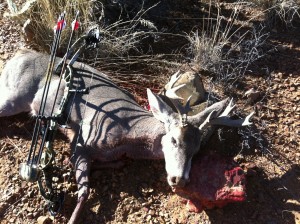