A Pair of December Bucks 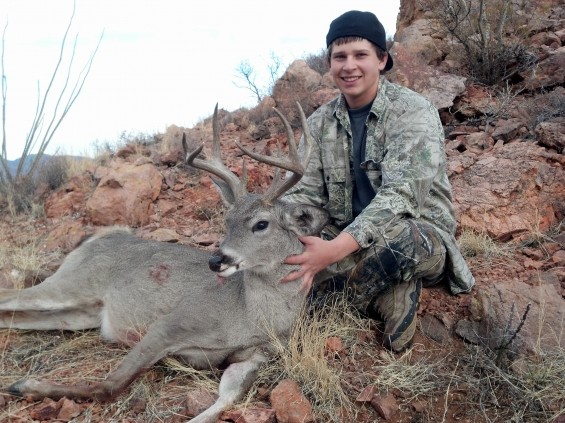 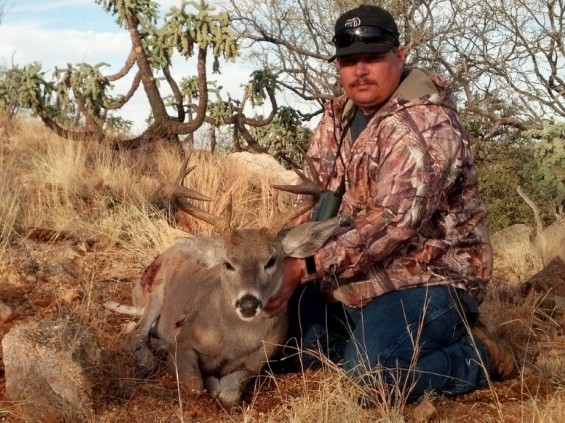 My son Cole and I started our hunt on Saturday Dec 15th since Cole was still in school on Friday. There would be plenty of time to hunt during winter break. That Saturday had nasty wind and the deer just were not moving. Cole was fortunate enough to glass one deer but it was out of sight before he could get me on it.

Sunday was a better day and the deer were moving, but still no bucks. I was planning on going out by myself through out the week, but we had a dog get sick and needed to go to the vet. I finally made it out on Thursday. I spent the morning glassing some hills that have held some really good deer over the years. Nothing. The does were barely moving. It was 12:00 so I decided to get up and glass from the same hill but in another direction. With in 15 minutes I see a buck bedded in a thick group of trees and cactus. I could see that his main beams were heavy but I was having a hard time seeing the length of the tines.

I had watched the buck for a half an hour trying to see how big he was. I texted Cole to let him know that I had a good framed buck bedded and was trying to decide to take him. Cole knew that I was after a 105″ buck or bigger, but told me that if the buck was around 100″ that I should take it. I had ranged the buck at 540 yards dialed in the moa and set my rifle up for the shot. When the buck stood up to stretch I saw that he was right around 100″ and decided to take the shot. Whop, the buck was down.

I called Cole to let him know that I had taken the shot and the buck was down. He was out of school at this time in the day and asked if I wanted help getting the deer out. I said yes since I wanted to experience the hunt with him anyway. It seemed like it took Cole forever to get there. I couldn’t wait any longer, I had to go see the buck. He was a good mature buck, I measured him while I was waiting for Cole to get there. He measured 99″.

Now it was Saturday December 22. Cole and I go to another area where we had glassed a mt.lion a couple years before. It was overcast and I had glassed up some doe and a couple small bucks. Cole had told me he needed the sun to come out so he could see through his glasses. He has been using my old 16×50’s that I used before I got the Swarovski’s. I didn’t realize how bad those old 16×50’s had become. That night I called up my good friend Eddie to see if Cole could borrow his binoculars. Eddie said no problem. Cole said he wanted to glass his own buck for once. The next day we set up on a hill were we have had some good action in the past. And this time would be no different. It was like Cole was seeing for the first time, he was finding deer all over the hills in that area. I really felt bad that he was so restricted with those old 16×50’s. It was mid day now, we had seen a couple bucks that would be in the 80’s, and we decided we would come back for them later in the hunt if we didn’t see anything bigger.

Cole and I moved to the other side of the hill to see if we could find a bedded buck. I’m glassing the ocotillo choked bottoms and Cole starts glassing the the top of the mountain. Immediately he says I got a deer, it’s a buck. He guides me over to the deer. The whole time Cole knows it a good buck and that he is going to go for this buck. When I see this deer it was obvious he was a good deer. He was bedded only in some sage bush looking stuff out in the sunlight at the top of the mountain. I ranged the deer at 1500 yards. “Good spot Cole”. We figure out how we are going to stalk over for a closer shot and start making our move. As we are getting close to the position, the buck gets up and feeds over the saddle.

We decide that we are going to drive around to the other side and hike to another vantage and try to find the buck again. It took us about an hour to get around to the other side and hike up to a good vantage that would be close enough for a shot. We start glassing, thinking that this buck can’t be to far from where we last saw him go over the saddle, but we’re not seeing him. After 2 hours of looking and trying to figure out what path he went when he came over the saddle, I go back to the saddle to start over and there he is. Feeding in the shadows. He must have laid down right at the top. I range him at 660 yards while Cole is getting the rifle set up. We had to work fast, the sun was setting and getting real close to blinding out the scope. Cole finds the buck in the scope and dials in the moa. As soon as the buck turned broadside he shoots. I could see in the binoculars it was a good hit. The buck hopped twice and ran about another 10 yards before he went down, about the same time the report of the hit got back to us. Whop! Hi fives!

The light was fading fast. Since the mountain was very steep and the rocks were very lose, I made the decision to be safe and recover the deer in the morning when the light would be better. A couple of friends wanted to help with the recovery of the buck. Vinny and Chris, thank you!