June 22, 2012 by CouesWhitetail in Rifle Gallery with 0 Comments

Danny Howard (a regular CouesWhitetail.com member) had this to say about his daughter’s hunt:

Here are some pictures of my daughter Alex and her coues buck, along with me and my son Chase. She is eleven years old and this is her second buck in two years. I only had one day to take her hunting. So we drove down from Safford late on November 19th to south of Tucson and got there at dark. We spent the night with Ernesto and his brothers at their camp in 36C. We got up at 4:30 and left for 36A. We went to a ranch that I had grown up on, to hunt some small hills. All morning, I was glassing up lots does and fawns. At about 11:00am, I glassed up this buck bedded down. It took me almost 20 minutes to decide if it was a buck or not. He was laying in some catclaw and sometimes it looked like a buck and others not. We stalked to within 500 yards and only then was I able to make out the antlers very well in the brush. We continued stalking up the desert washes until we got to within 234 yards. I had her lay down and then had to calm her down, telling her to take her time. She squeezed off the shot from her .22-250, I heard the distinctive sound of the “thump” of a hit. The buck got up and ran up the hill about 20 yards. I told her to shoot it again. She shot again and the buck dropped in its tracks. After a couple of high-fives and a hug, we went and retrieved her nice 4 x 4 buck.

If you would like to see Alexandra’s first deer, you can find it here. 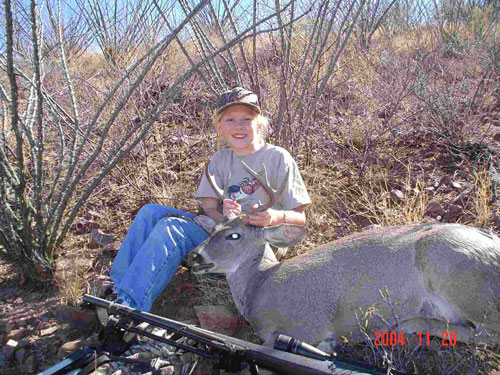 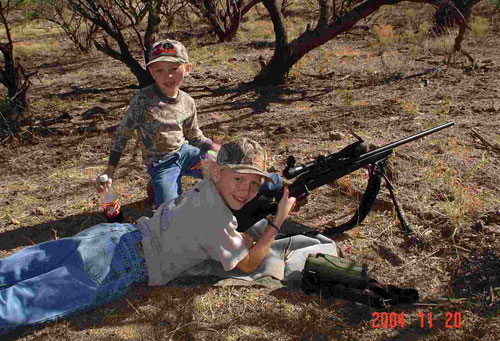 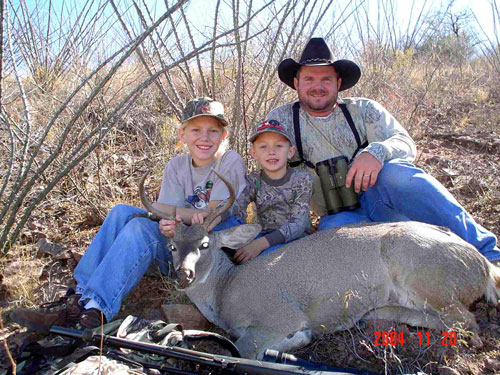