An Improbable Journey: My Hunt with Greg Stube

November 19, 2012 by CouesWhitetail in Hunt Stories, Rifle Gallery with 0 Comments

An Improbable Journey: My Hunt with Greg Stube

Like so many of you, I was moved to action by the keynote address given by Greg Stube at the 2012 Wild Sheep Foundation’s Saturday night banquet.  Greg, a retired Green Beret, was nearly killed in Afghanistan by Taliban fighters in 2006 when an improvised explosive device hit his vehicle. The explosion literally blew him up and set him on fire while launching his driver over 70 feet onto an adjacent hillside. While Greg scoured the hillside frantically looking for his fellow soldier the enemy shot him two more times almost assuredly killing him. Almost. 17 surgeries and a year and a half long hospital stay later, Greg’s leg was miraculously saved and his abdominal wounds were “healed” (he lost more than 70% of his intestines when they fell out of his open wound in battle).

Fast forward several years and Greg has taken to a life dedicated to continuing his service to his country.  Today Greg’s contribution to ministry, the NRA Life of Duty project and national inspirational speaking engagements keep him “on the go”. As a Veteran Air Force Officer inspired and touched by his words, I had to meet Greg immediately. He was able to describe so elegantly and effortlessly the reason why our country takes to arms, a message I so often fail to be able to put into words in my own national speaking engagements. Simply “to spread love and compassion” in places that have no freedom, no liberty and no hope. I know that may sound strange to some of you, but the facts are when we are dropping armament on enemy forces it truly is to spread the hope of freedom, love and compassion to those who are oppressed. As some of you may remember, I took to the stage as my Arizona Coues deer hunt was about to be auctioned off and “challenged” all of those in attendance. I stated that if my donated hunt garnered more than $10,000 (it always has) that Greg would be included on the hunt as well. (Privately I had already told Greg and his wife Donna that he was coming anyways, no matter what happened on the auction block). As usual, your generosity to the Wild Sheep Foundation’s cause rung true and when the gavel dropped over $12,000 was raised for conservation.

Luck was on our side as Greg drew a quality Coues deer tag the first year we applied in the Arizona draw.  We spoke several times leading up to his hunt and he insisted on making a video showcasing Diamond Outfitters as well as his company, Nightforce Optics on the hunt. I was humbled but told him, this was Veteran-to-Veteran hunt that was truly my honor and that promotional accolades were not necessary. Greg showed up with a camera man at the airport. You now know how that “argument” went! With Greg’s hectic schedule and my Kansas archery hunt finishing the day the Arizona season opened, we knew we would miss the Friday opener. Saturday was spent filming video and still shots and Sunday morning we headed to camp in the Arizona mountains. We knew the hunt would be a challenge as missing the first couple of days of the season puts additional pressure on both the hunter and the guide on the remaining days. As it turned out 40 mile-an-hour winds and bitter cold (by Arizona standards) had most of the deer hunkered down opening weekend. Sunday afternoon we took to the hills to glass and just before sunset we glassed up a “tweener” buck (a deer in between and shooter and a non-shooter) at 1,450 yards.  It was too late in the day to make a stalk on him so we went back to camp happy that we had a buck to follow up on later in the week if need be. I asked Greg how the hike was for him, genuinely wanting to know if it was ok, and if he could continue this pace for a week.  He simply said it was “fine”. Leave it to a Special Ops guy not to complain I thought. Monday morning my guide Will Kellner joined us. Will, at 22 years old, is a rock star and one of the up-and-comers in this industry.  I am lucky to have him on my team. The three of us headed out to an area Will had scouted out for us while Greg and I were filming near Tucson. A spectacular sunrise greeted us but the winds were still pretty obnoxious minimizing deer movement and making glassing, even with high powered Swarovski’s and tripods, unpleasant. Fortunately, we still glassed up a couple of young bucks that Greg was willing to pass on. That evening we returned to our hill with the “tweener” buck and all we found were does, fawns and bitter wind that cut through all the layers of clothes we were wearing. We couldn’t get to camp for a warm supper fast enough!

Tuesday morning Will convinced us to take a “big swing” and commute to some private ground that would require a one hour earlier wake up time than the day prior. Our camp cook Willie thought I was joking when I instructed him we would need coffee and breakfast ready by 4:00.  Despite another postcard Arizona sunrise that morning and lessening winds, we were totally shut out in our glassing efforts. Not even a doe provided us anything to look at. Greg questioned our sanity for glassing the same country that long in the heavy winds when we were not having any success finding any signs of movement. As a Coues deer addict I always tell myself that the bucks are there, I just have to find them! After a quick lunch and a few laughs at camp with our other hunters and my staff we headed back out to the mountains to a spot where the sun would be at our back and we could glass over two miles away.  Just before dark Will and Greg both glassed up what appeared to be two older age class bucks. This would be the first physically demanding test of Greg as most of our walks to this point were long but purposefully slow. The range finder had the bucks at 1,350 yards. With only 25 minutes of legal shooting light left we darn near had to run over rocks Greg later described as “baseballs” or “marbles” and lots of “shin dagger” cacti.  I took to sprinting as the “spotter” and Will and Greg came on a purposeful walk. Will spent the entire walk hypothesizing with Greg all the possibilities that could occur when they got into shooting position. Greg later told me that Will really helped him mentally prepare for several potential outcomes. Unfortunately, despite our best efforts and hustle the “gray ghosts of the desert” were nowhere to be found when we were within rifle range. Disappointed, but not discouraged, we started the 60+ minute walk back to the truck in the dark. Wednesday morning we knew we wanted to be back in position to find those two bucks. It was another morning that the alarm went off way too early to come out of our warm sleeping bags and Kodiak cabin tents and into the 22 degree weather. Despite being sore and tired we began the long climb back up the hill in the dark. As sore as I was I wondered how sore Greg must have been! Finally, with only two days left in the season, the mountains greeted us without any wind.  It didn’t take long for Will to find a doe and year-and-a-half old buck that I thought this late in the game Greg might decide to take. He thought about it and directed me to find him the two older bucks from the night prior. It was a good pass from a patient hunter.  Only a few minutes later, I glassed up a bobcat in the far distance.  Greg, having sniper accolades and the highest quality rifle and scope, harvested the predator almost effortlessly at a yardage I won’t even disclose. Trust me it was impressive! Less than an hour later, in the exact same spot as the night prior, our two bomber bucks appeared out of nowhere (typical of Coues deer). Excitedly I told Greg we had to move immediately before they went behind a hill where we would lose sight of the deer. After a long stalk over a mile, Greg found the deer grazing. I joked with him that he “showed me up” by finding the deer before I did! Throughout the stalk I couldn’t help but think if Donna or Greg’s doctor saw how much difficult terrain we had run over and conquered that they would kill me! Greg never missed a beat and heart shot his trophy buck at nearly 400 yards. Greg’s Coues buck is a heavy horned old warrior with great eye guards. Truthfully, I shared with Greg that his buck is better than any I had ever harvested myself!  As luck would have it, the entire stalk was in the opposite direction of the truck and the pack job back took half a day.  As the sun began to set on the afternoon, I looked up to see Greg with his rifle, back pack and all of his camera gear over 100 yards in front of me. So here I am, known in some circles as “The Coues Guy” getting beat out by a man who only six years ago basically had his leg blown off. I’ve got to get to the gym I told myself. Greg came as a fellow Veteran and left as a friend, a true friend. Already we are planning on future visits with both of our families. Ideologically, Greg and I are the same and it was a pleasure to guide him and an honor to have him in my camp. I want to say thank you to Gray and all of his staff at the Wild Sheep Foundation for bringing us together and all they do for wildlife conservation. I also want to send a big thank you to Mr. and Mrs. Jeff Demaske of Colorado for offering to purchase Greg’s plane ticket, Arizona hunting license and deer tag, your generosity made this trip a reality for both Greg and I!    As I left Greg at the airport a large smile took to my face. I couldn’t help but think about one thing: If only those bastard Taliban fighters, who I am certain thought Greg was dead, could see him now! Let freedom ring! 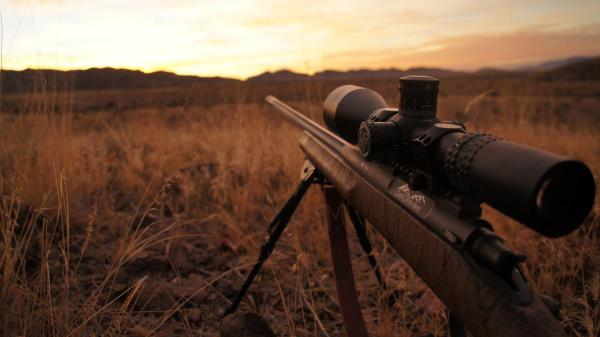 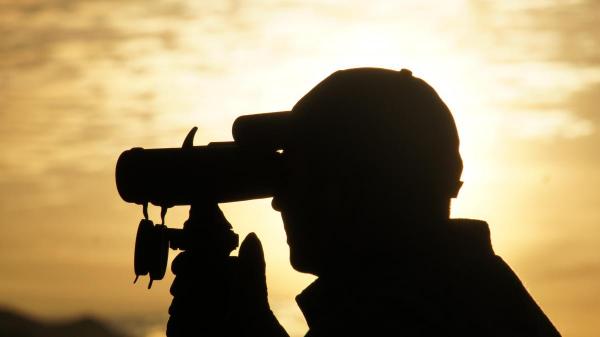 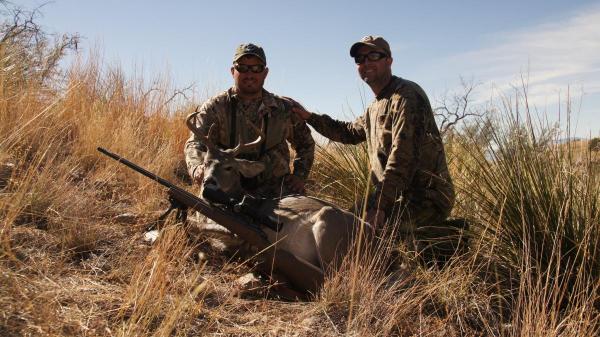