Home / Featured / Another Youth Hunt of a Lifetime!

Another Youth Hunt of a Lifetime!

A junior hunt of a lifetime

We headed up the hill Thursday with high expectations as we had put countless hours of scouting in evenings and weekends and had seen several good bucks in the weeks leading up to the hunt. Thursday was perfect (cloudy & rain), temperatures cooled off about 10 degrees. 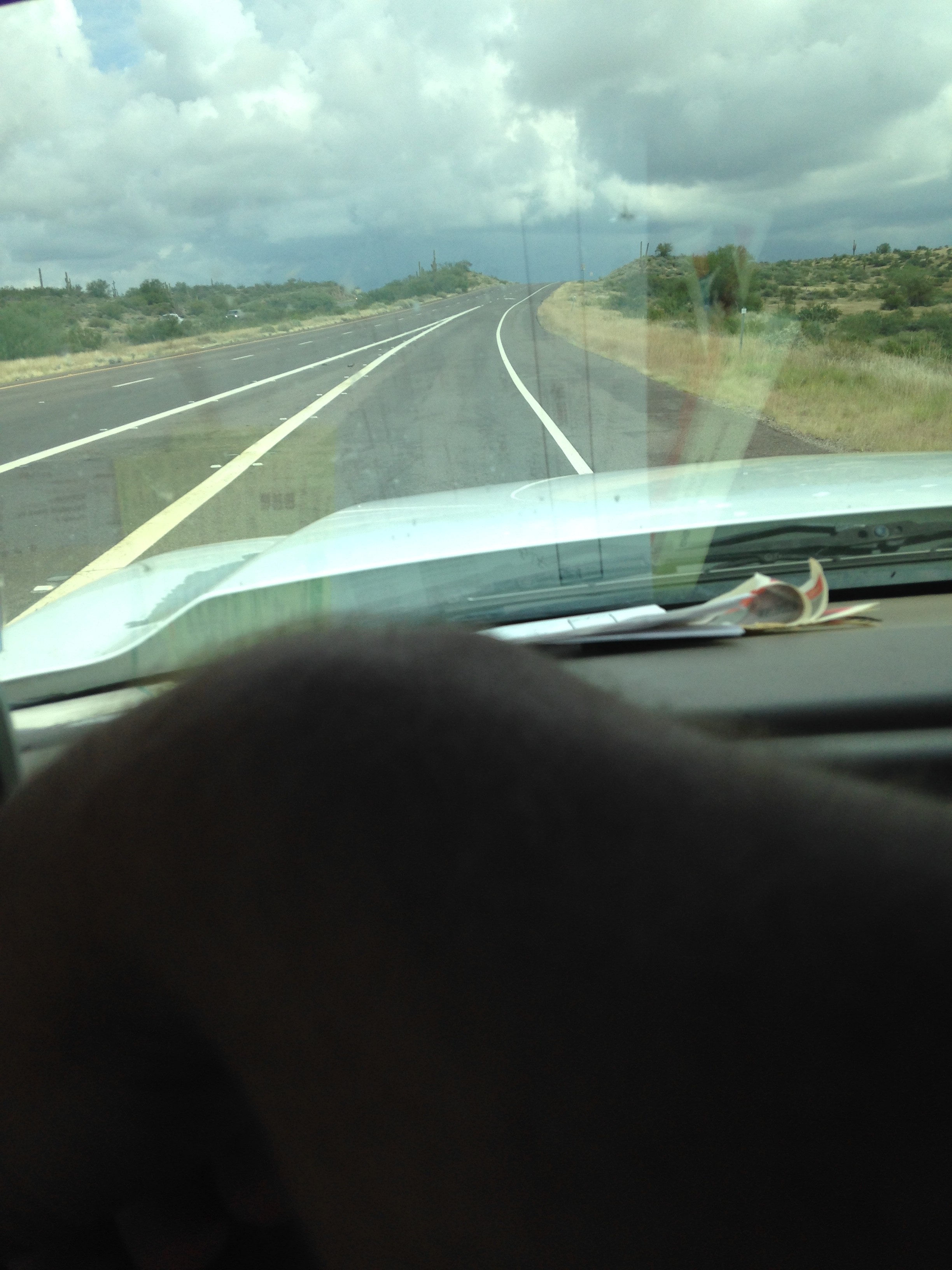 we reached camp around 12:00 under cloudy skies and steady rain. 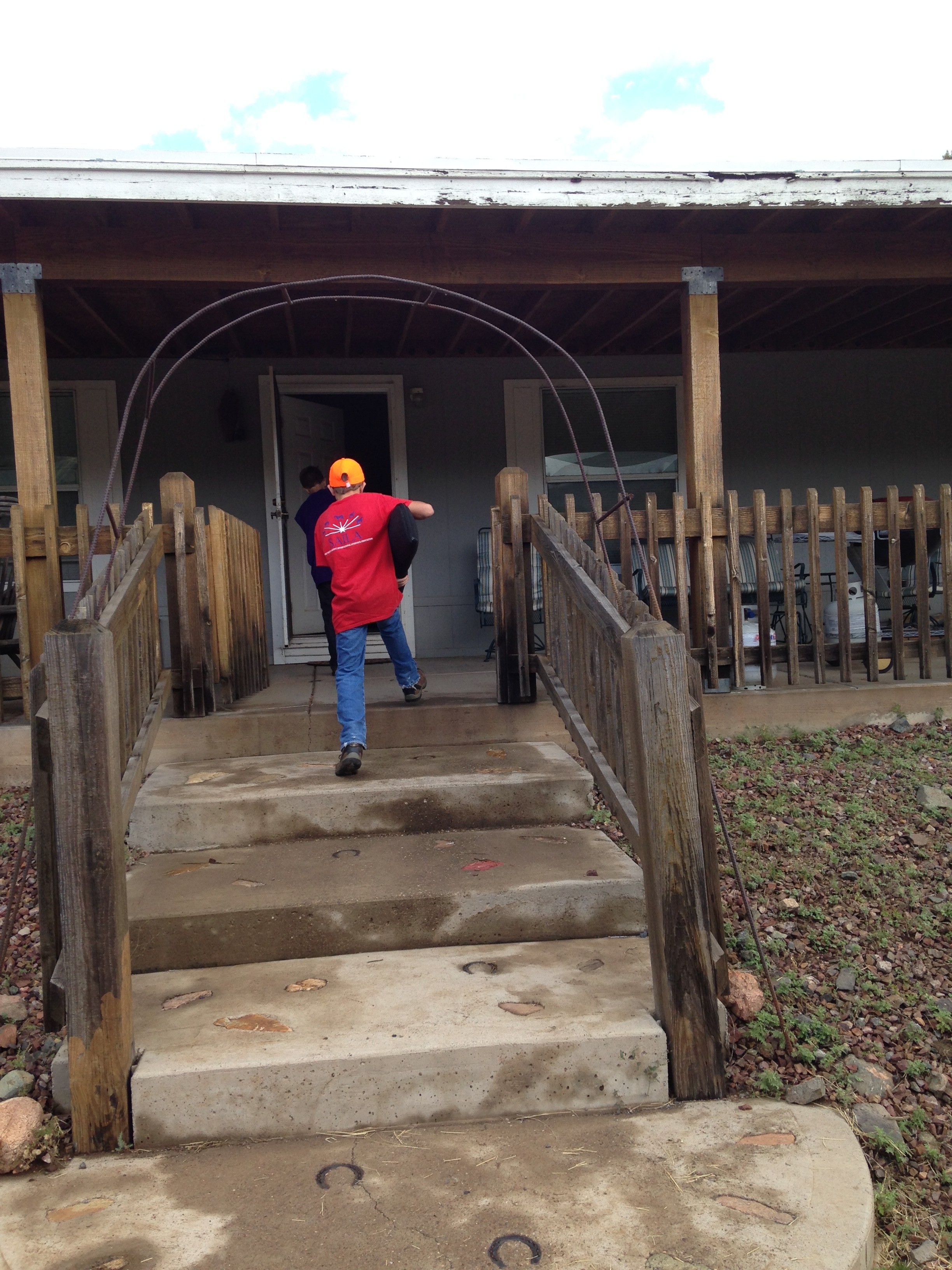 thanks to my Dad camp isn’t so bad. 3 bedroom house in the heart of some the best country in the unit IMHO. nice place to unwind kick your feet up and take a hot shower at the end of the day.

Lane & Tucker started off by Collectively Agreeing to let their sister go first for the first five days as that is all she had to hunt… little did they know at the time that good things come to those who wait!

The first three days produced many nice bucks, but no shot opportunities, we did encounter an AZ Black Tail rattlesnake 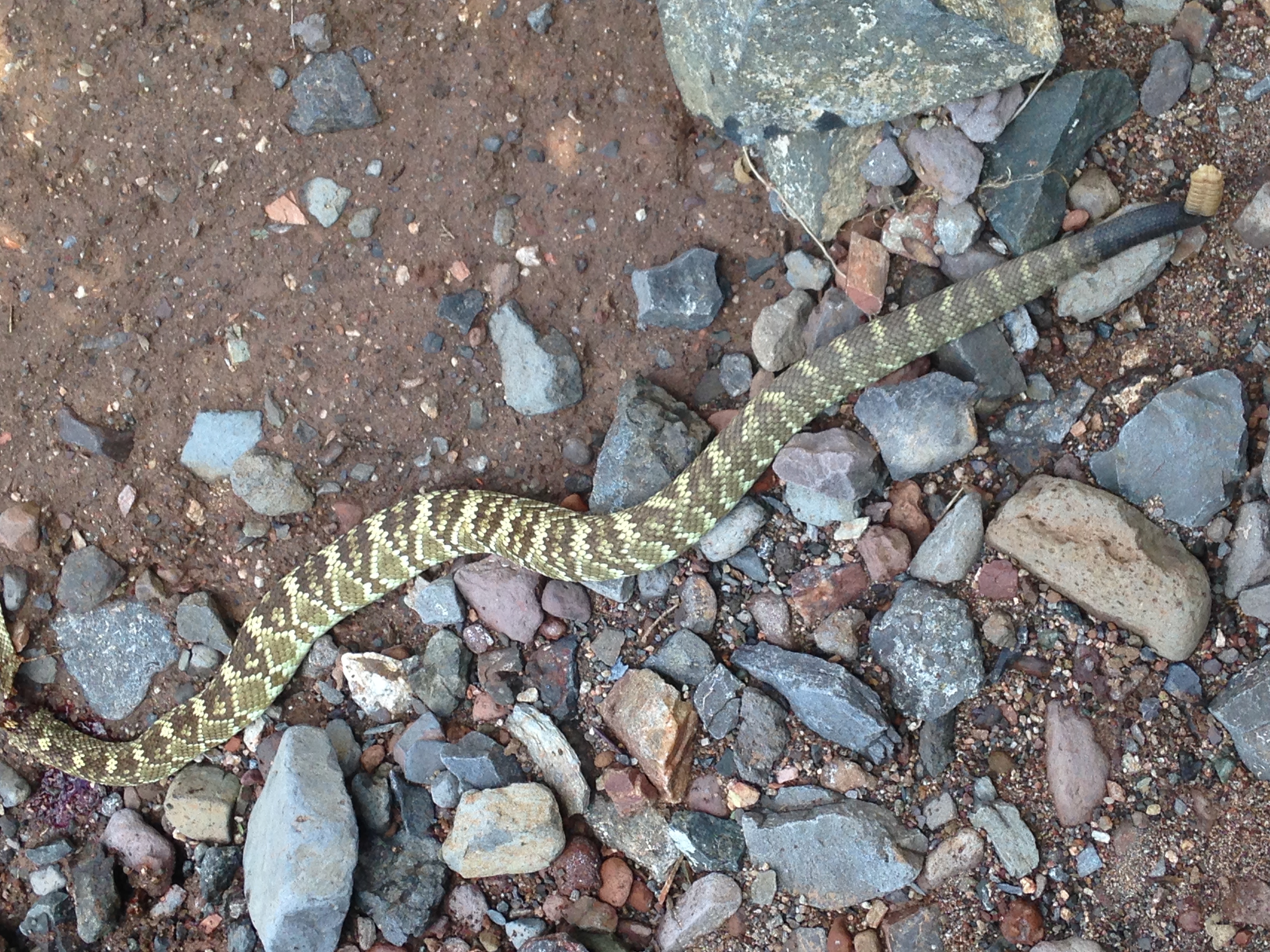 who was mad at the wold. we found some fresh bear tracks but no bear.. we saw several tarantula’s (i quit counting after 10) 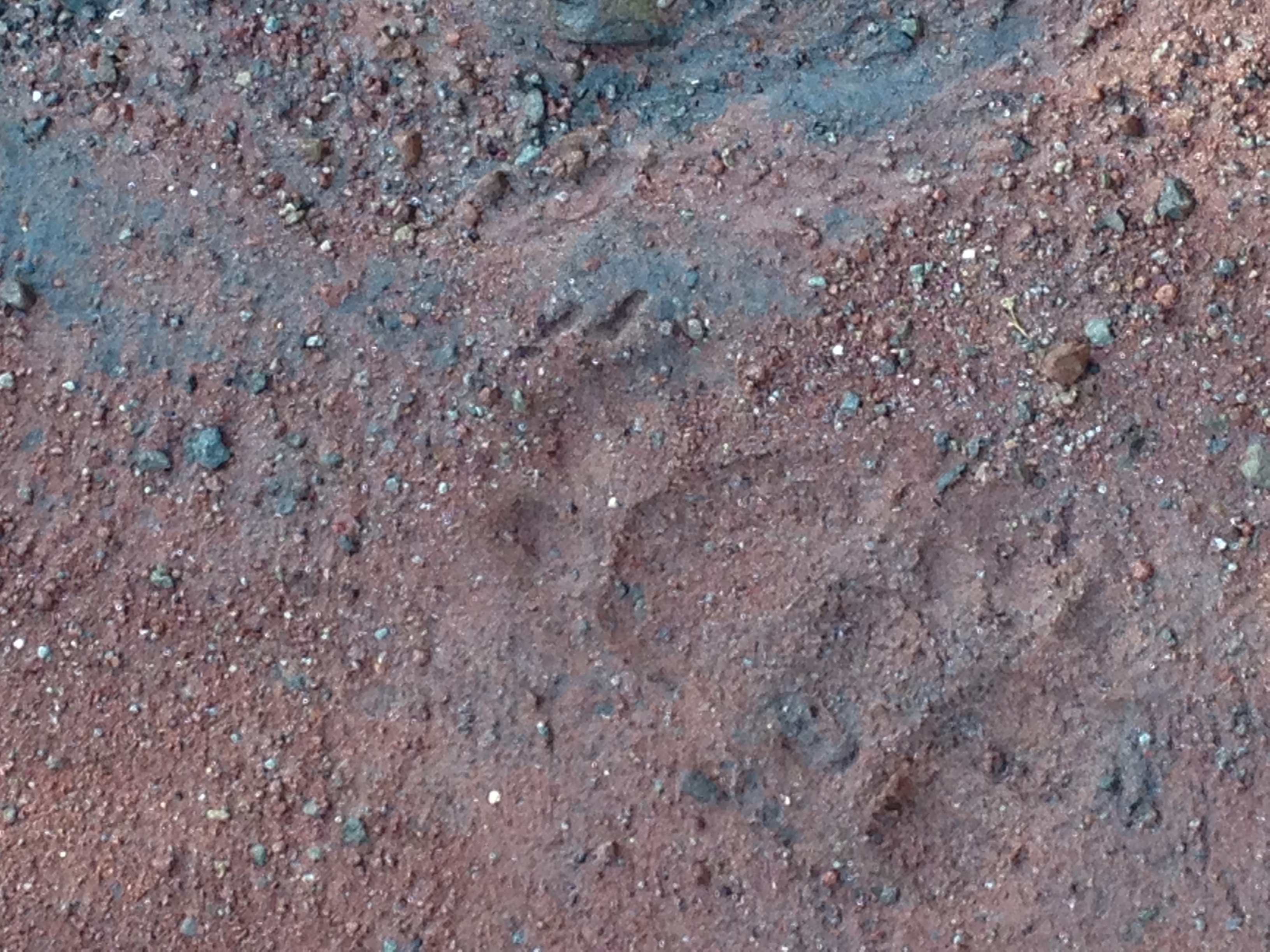 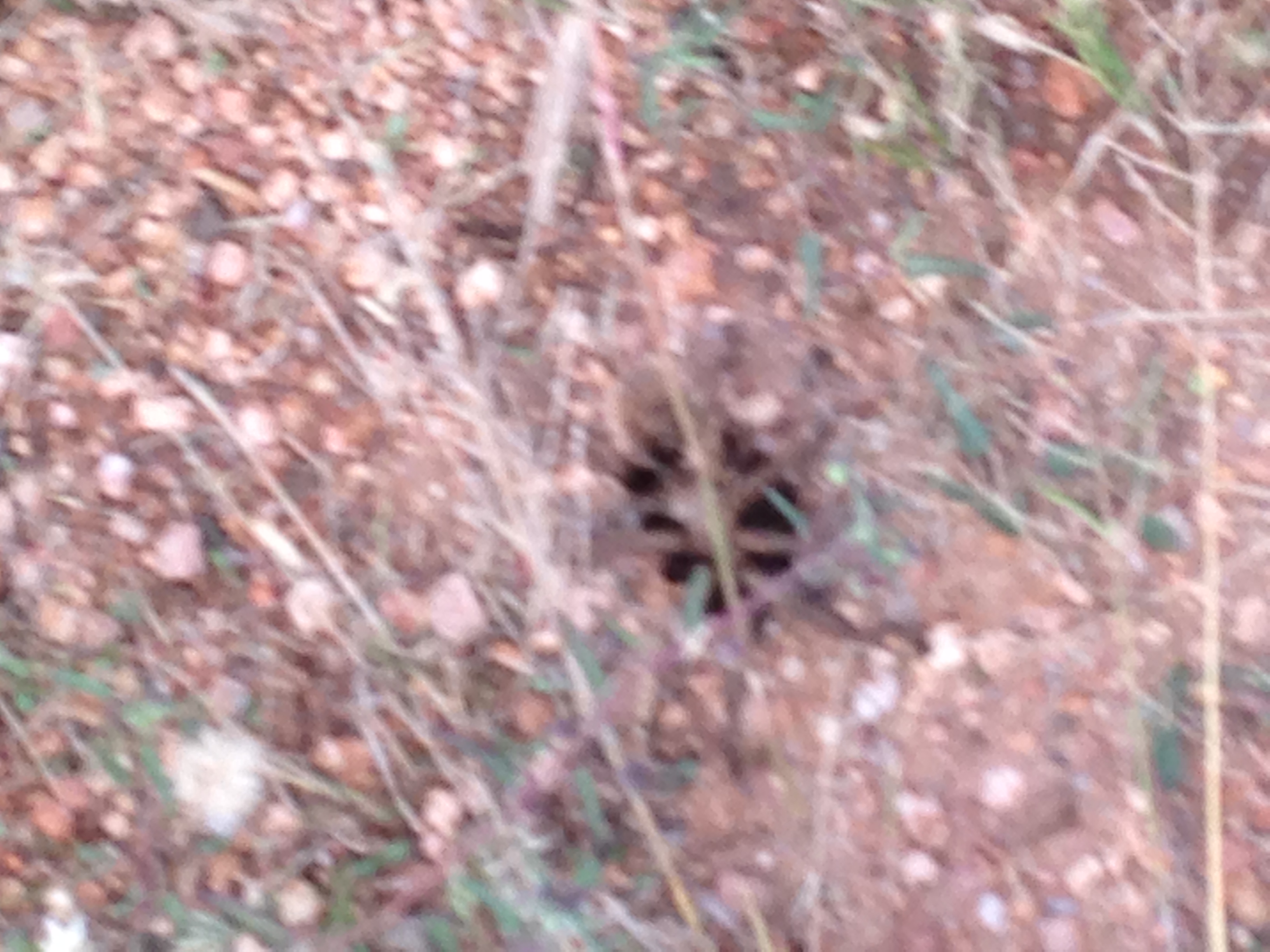 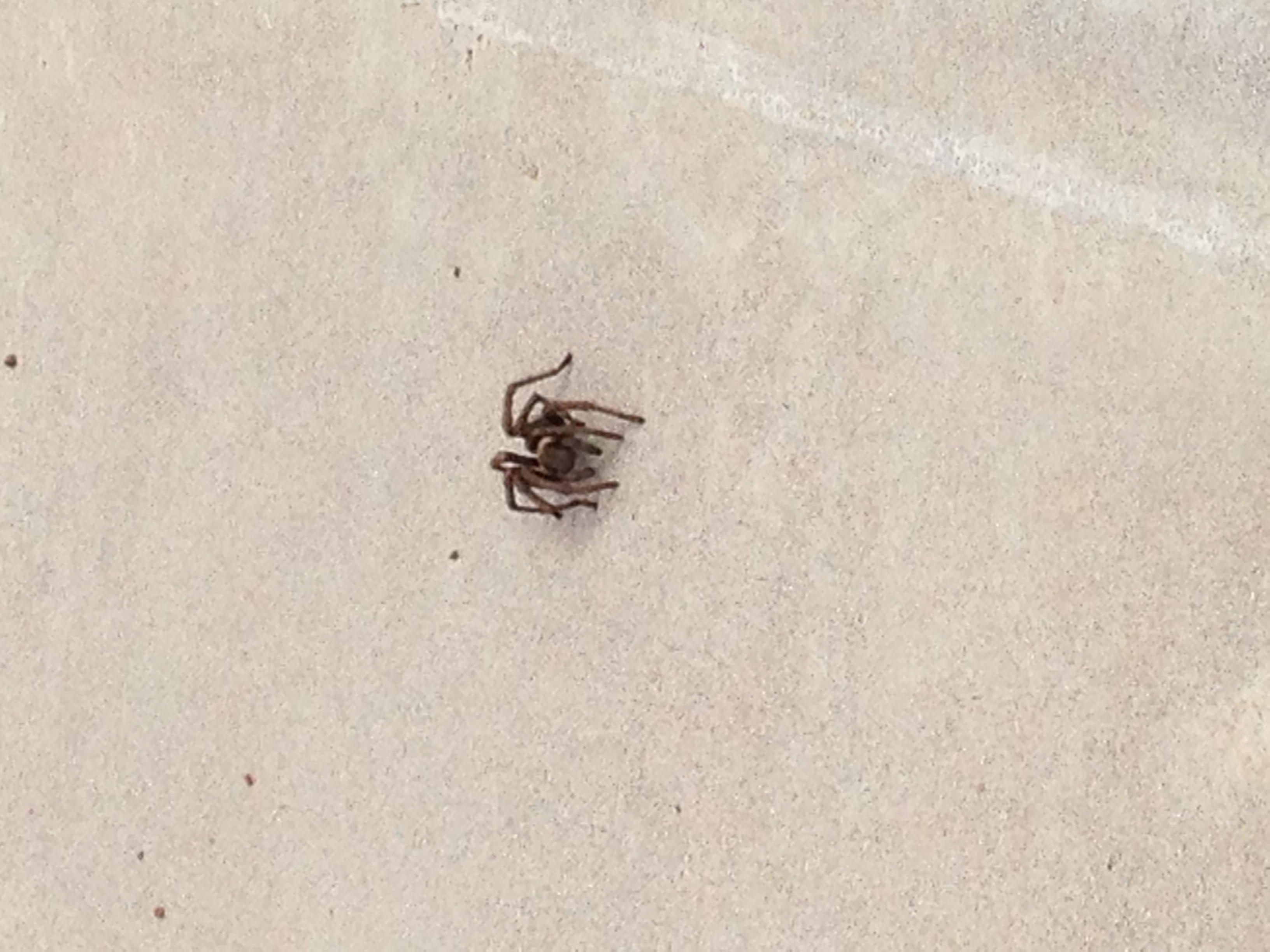 On Monday morning we moved into a new area that we scouted once. My Daughter and her Older Brother got onto a small coues buck and doe, but ran into another rattle snake 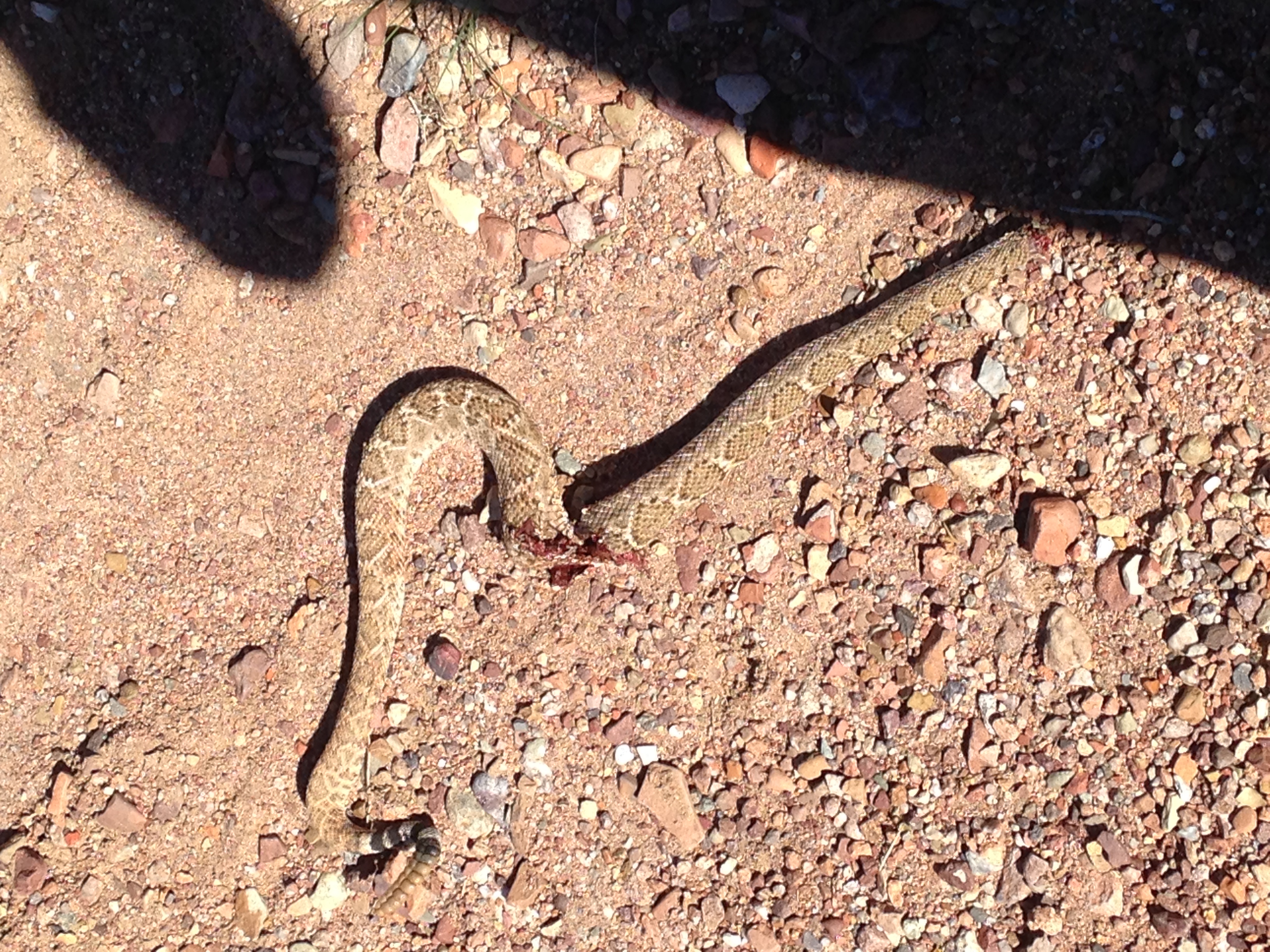 (who struck my oldest son in the boot (thank god it did not puncture anything). that evening we glassed up a group of does feeding away over the top of a ridge. we hurried back to the truck and drove around approx. 3 miles to get on the other side, put up the glass and located 5 bucks. Mckayna and i began the stalk and were able to close the distance to 265 yards. she squared up on a nice 5 x 5 mule deer and squeezed off it was a clean miss, she loaded another round and another miss. light was fading and the deer went back to feeding, she was unable to get back on them before we lost light.

Tuesday arrived and we started off where we ended Monday but only found some does. we hunted around until around 2 pm where we all agreed to go sit under a tree and wait for the bucks to return just before dark where we were Monday…we waited patiently 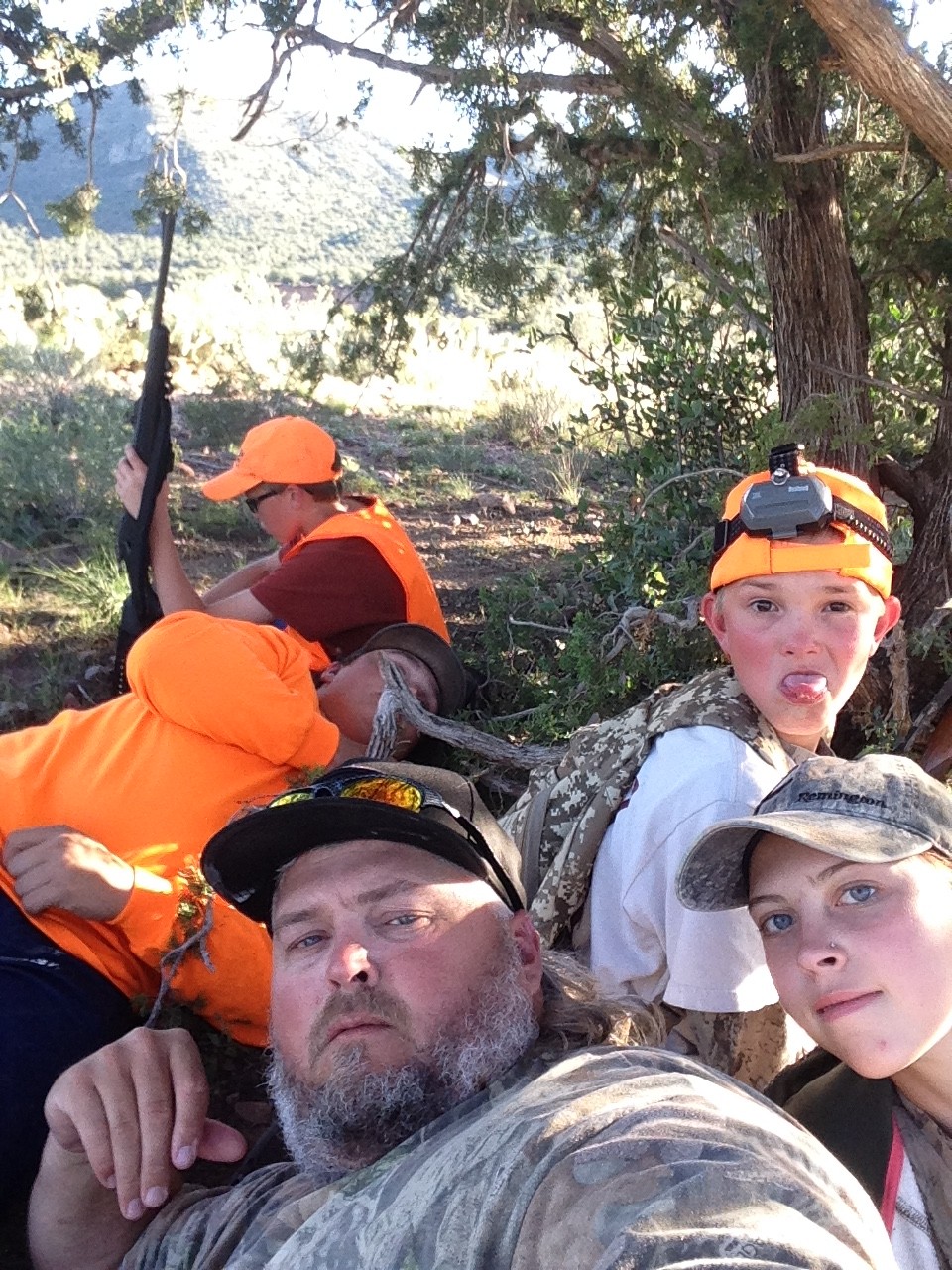 until 5:58 pm when the four small bucks came running down the hill to the feeding area  where she shot her buck. a 1 x 2 at 165 yards.. we all made our way over to the buck took some pictures and dressed the animal. the kids carried all the gear, and i packed the deer. we encountered another rattlesnake on the way down in the dark not a good thing in the dark loaded down with gear and game. 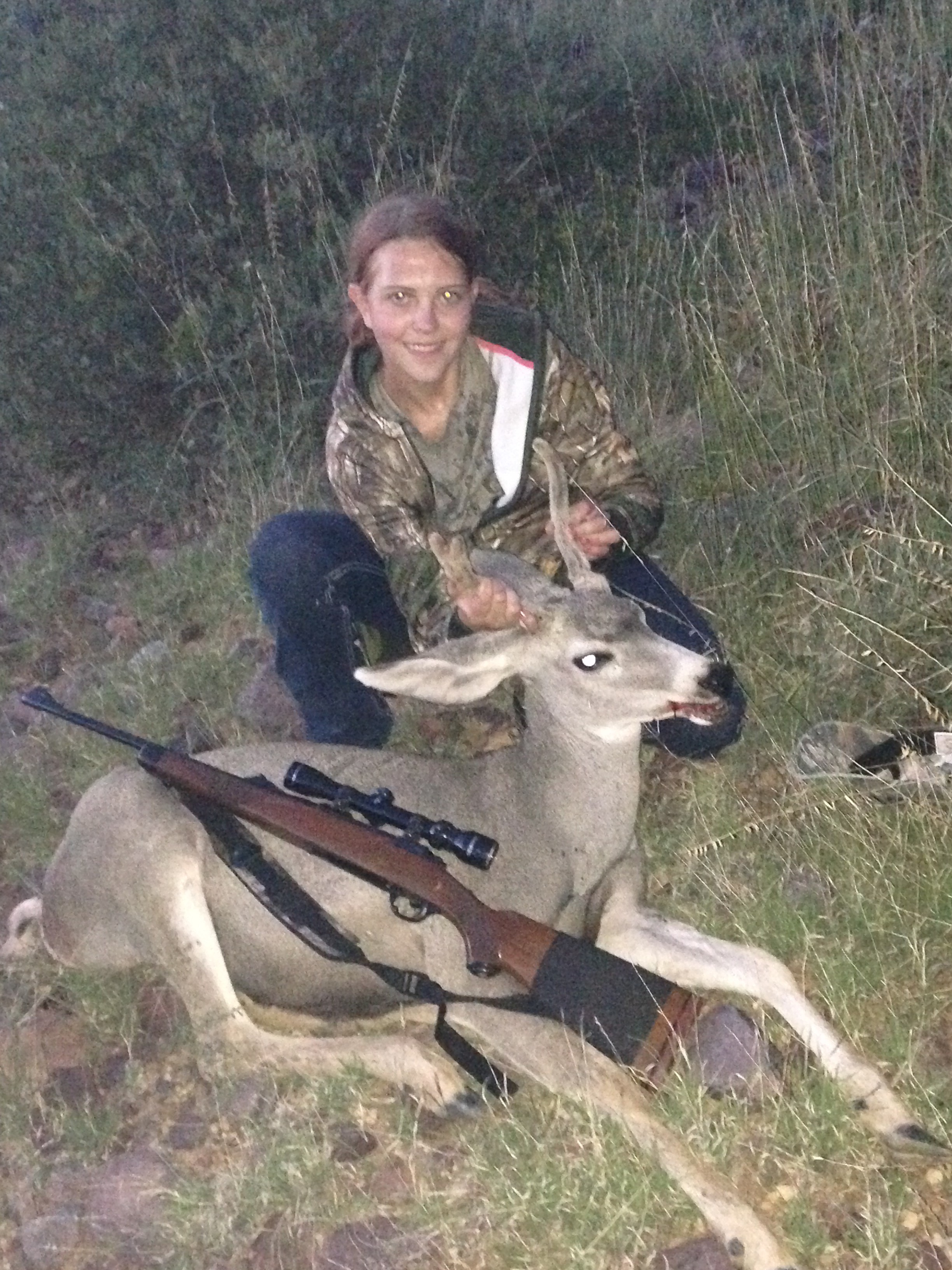 Wednesday Morning arrived and the boys were on deck. we slowly began working our way along a ridge top alternating north and south sides glassing. at out third set up i was glassing south, Lane was sleeping, Tucker was eating sunflower seeds and playing with grasshoppers when he says Dad i just saw some deer on my side. so i stand up walk to his side and see nothing. he said i swear they are there. so i start glassing and there is a stud standing under the shade of the tree with his doe. the boys set up on the fence Lane said i got him and I am going to shoot, tucker says go for it get him. Lane dropped his first AZ Deer ( 3 x 4 mule deer) 176 yards one shot big buck down. it took all three of us two hours to slowly drag that big old buck out of that canyon! 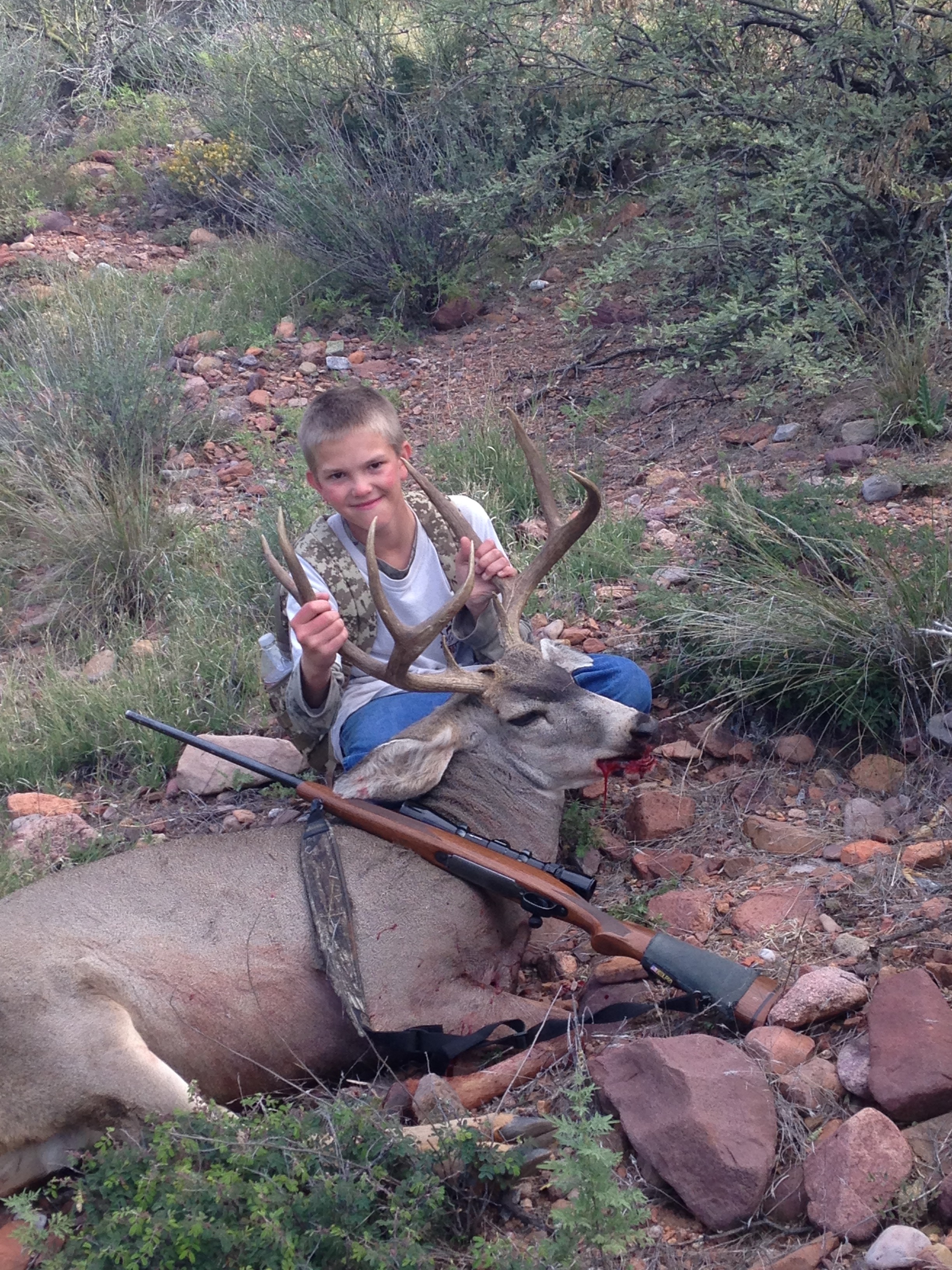 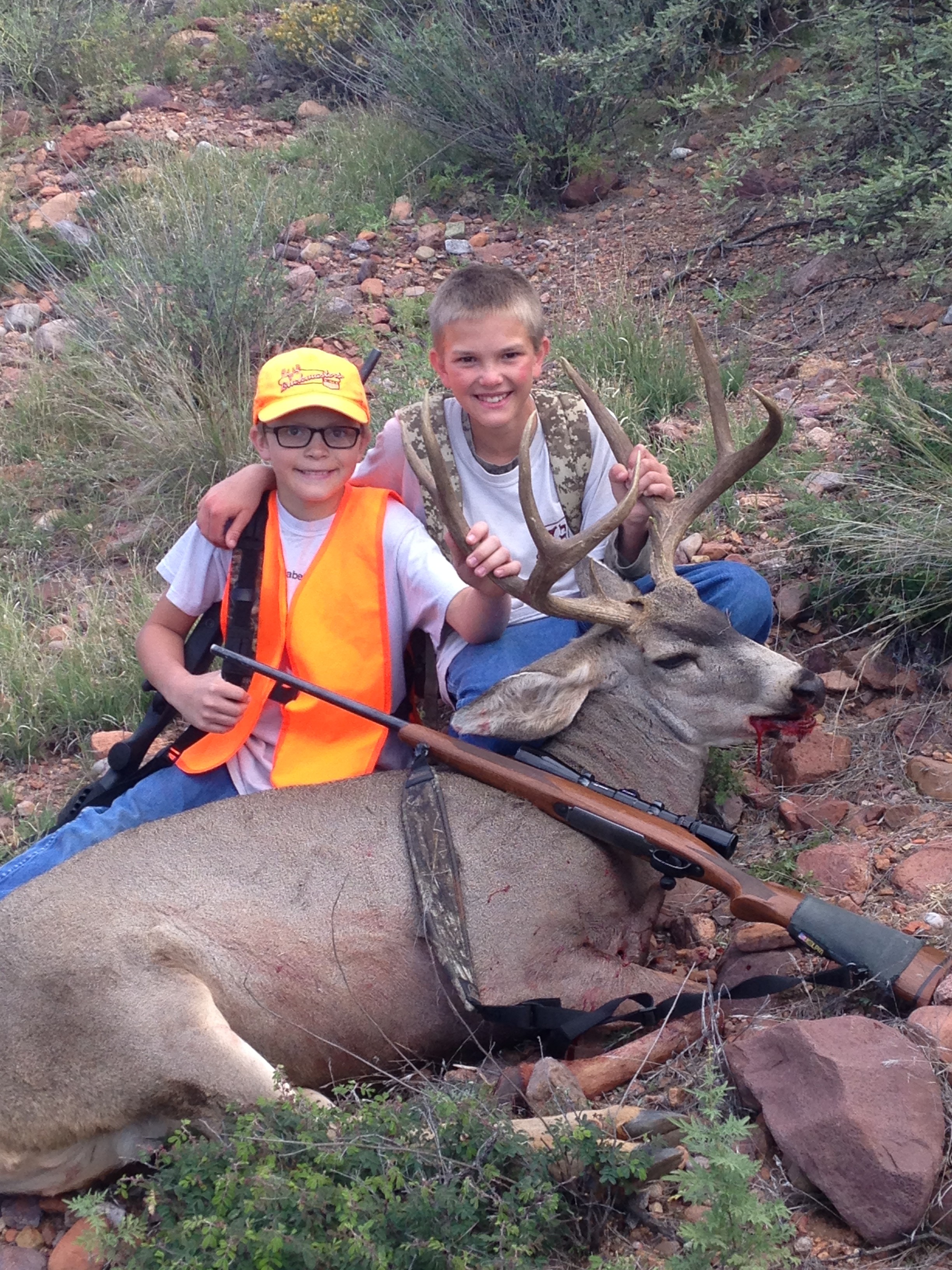 during a breather during extraction…. i caught Lane in a moment with his buck… i can only imagine whats going through his mind 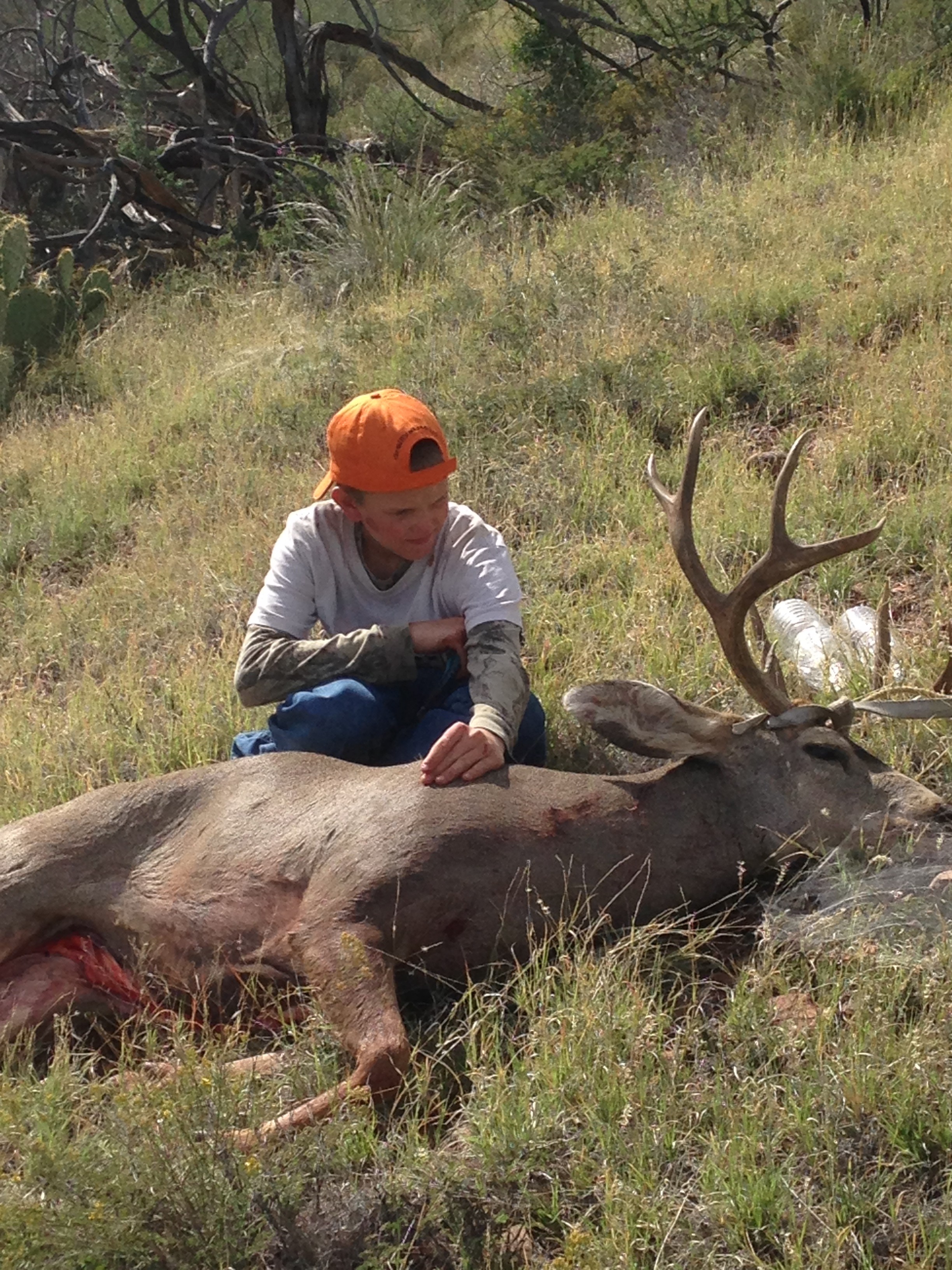 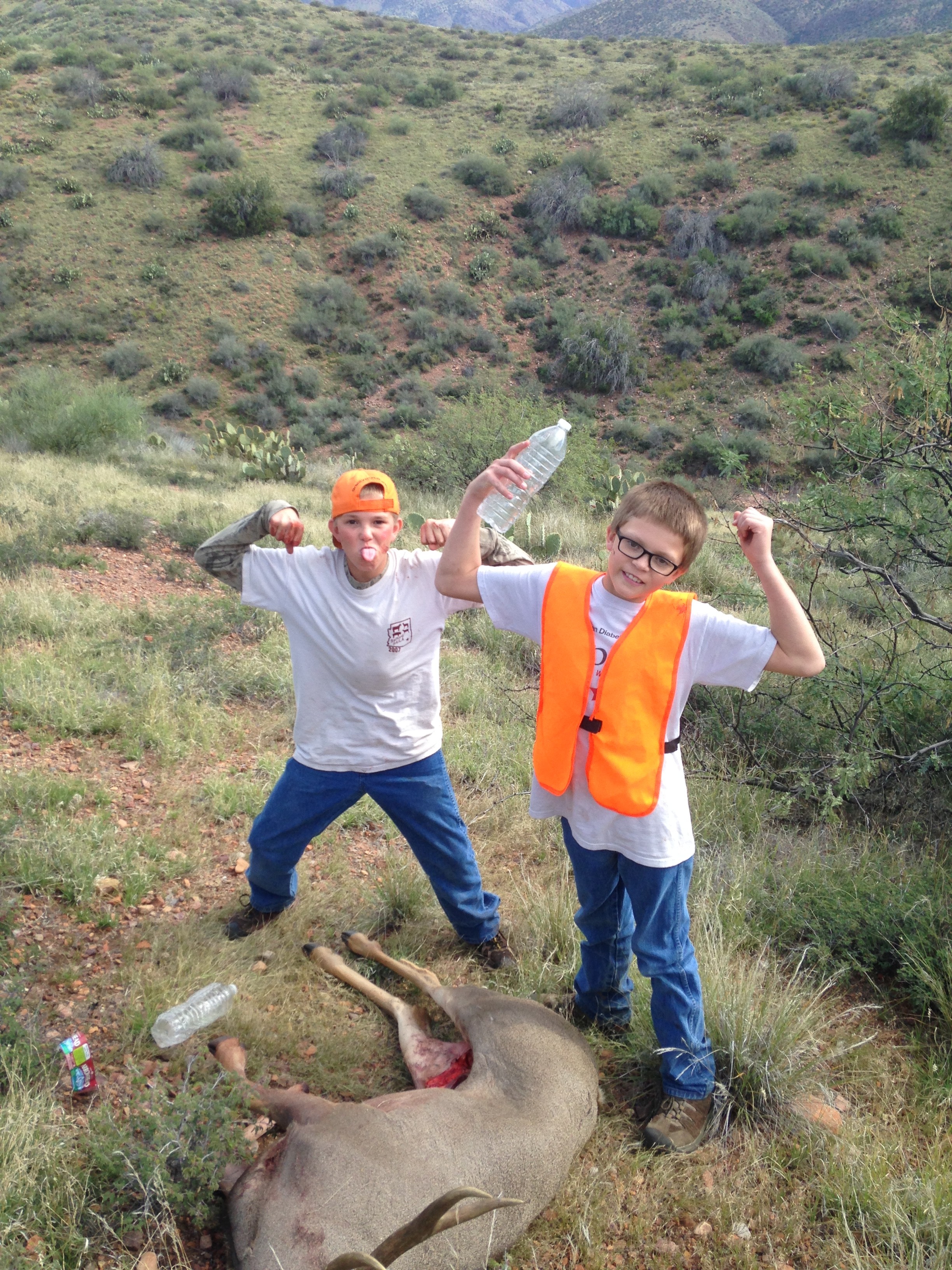 Wednesday evening didn’t produce much (just a few does).

Thursday was the last and final day. Tucker was the lone ranger on deck. Since we did not get to work all the canyons on the ridge we were on Tucker decided he wanted to return to the same ridge and repeat what we did on Wednesday. so we began the morning on the ridge working canyon by canyon. On our first stop we glassed up 8 nice javelina, 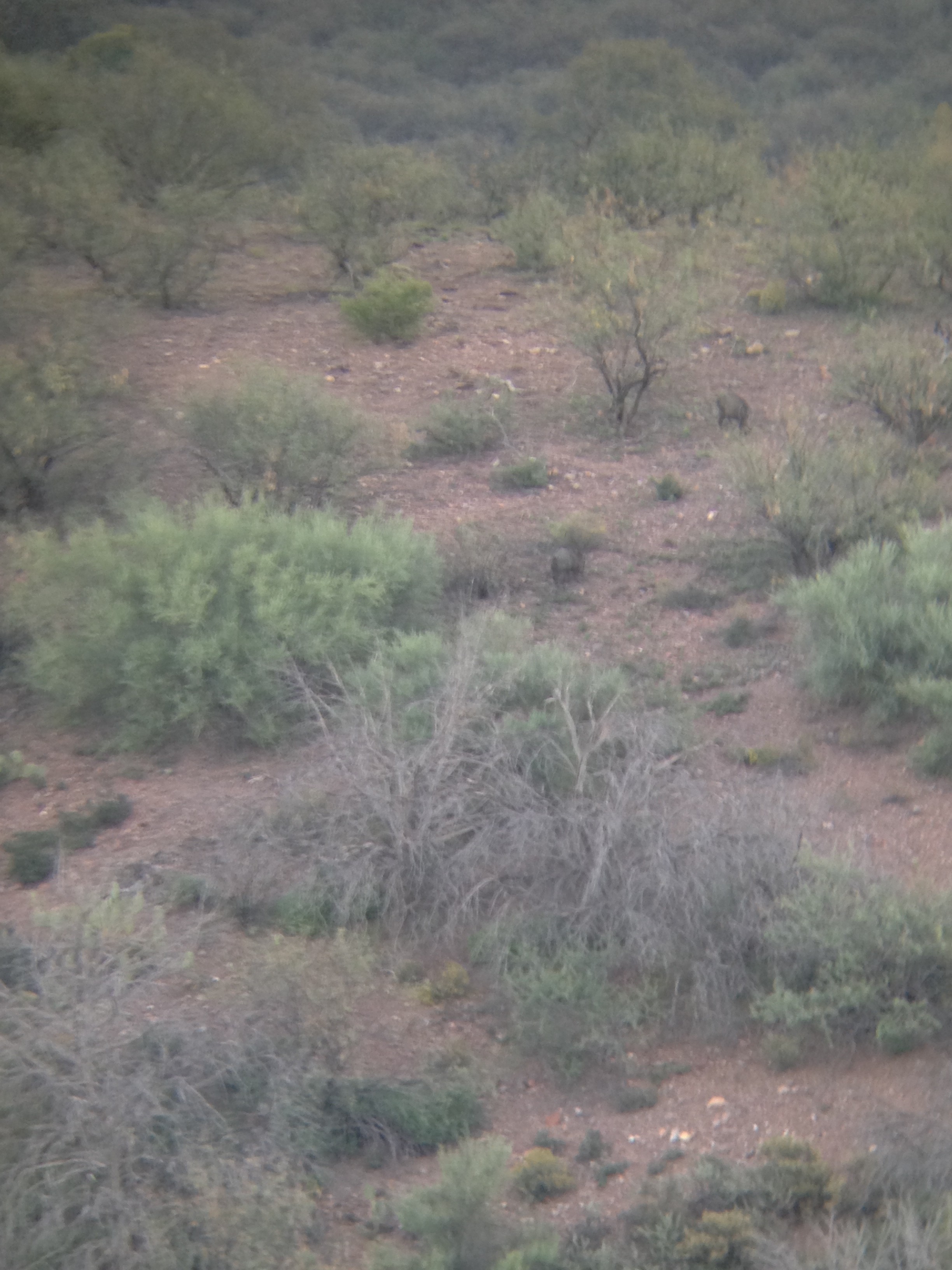 and were being chilled by the stiff cold breeze. then our second set up i was glassing down the canyon where Lane shot his deer the day prior. there were about thirty crows fighting over the gut pile about 1/2 mile down. i slowly began running my pan head down the canyon back to myself when a grey ghost appeared he was feeding in the dimly lit canyon. i pulled out the range finder and the buck was 396 yards feeding without a care in the world. we tried to close the distance but only encountered more obstacles and ended up back where we began 396 yards (tucker made this same shot on his elk the year prior ) the buck was facing us on a quartering angle, and the sun was coming up making it hard to see through the scope. so lane and i stood on the sunny side and blocked the suns glare. i set the gun up on the tripod and coached tucker through where to hold, seems like and eternity passed when he finally squeezed the trigger… and we heard the unmistakable sound of the whop!!!! i said you nailed him, and the buck was gone in and instant. Lane and i glassed the side of the hill relentlessly and saw no movement, no sign. Lane stayed behind on the tripod watching the spot the buck last stood. Tucker and i slid under the fence and began slowly working side tail down the opposite side of canyon. we closed about 150 yards it was steep slippery slope where tucker fell cut his hand hit his head and landed in some prickly pear, he began crying. i said but i know it hurts but your going to have to reach down and pull yourself up and get back on this. so he did, when we turned to walk again deer started blowing out 5 does went flagging up the hill. still no sign of the buck. we kept panning down to the tree he was under when tucker shot, and there he was walking slowly up the hill following the does. he was hit hard and bleeding profusely. tucker fired two more shots and missed. the buck began moving faster going to the top of the hill. when the buck switched back to the right broadside tucker drilled him again in the right front shoulder, but it didn’t even knock the buck down. he continued another 75 yards up the hill to a thicket where we watched him bed down. we sat down and waited, i told tucker we sit and watch he will expire, if we keep pushing he will keep going. we waited and watched about 10 minutes when all of a sudden it was like the buck was launched from a spring loaded platform, he went from bedded to 5-6′ in the air doing back flips down the mountain where he quit tumbling and flipping after about 100 yards. 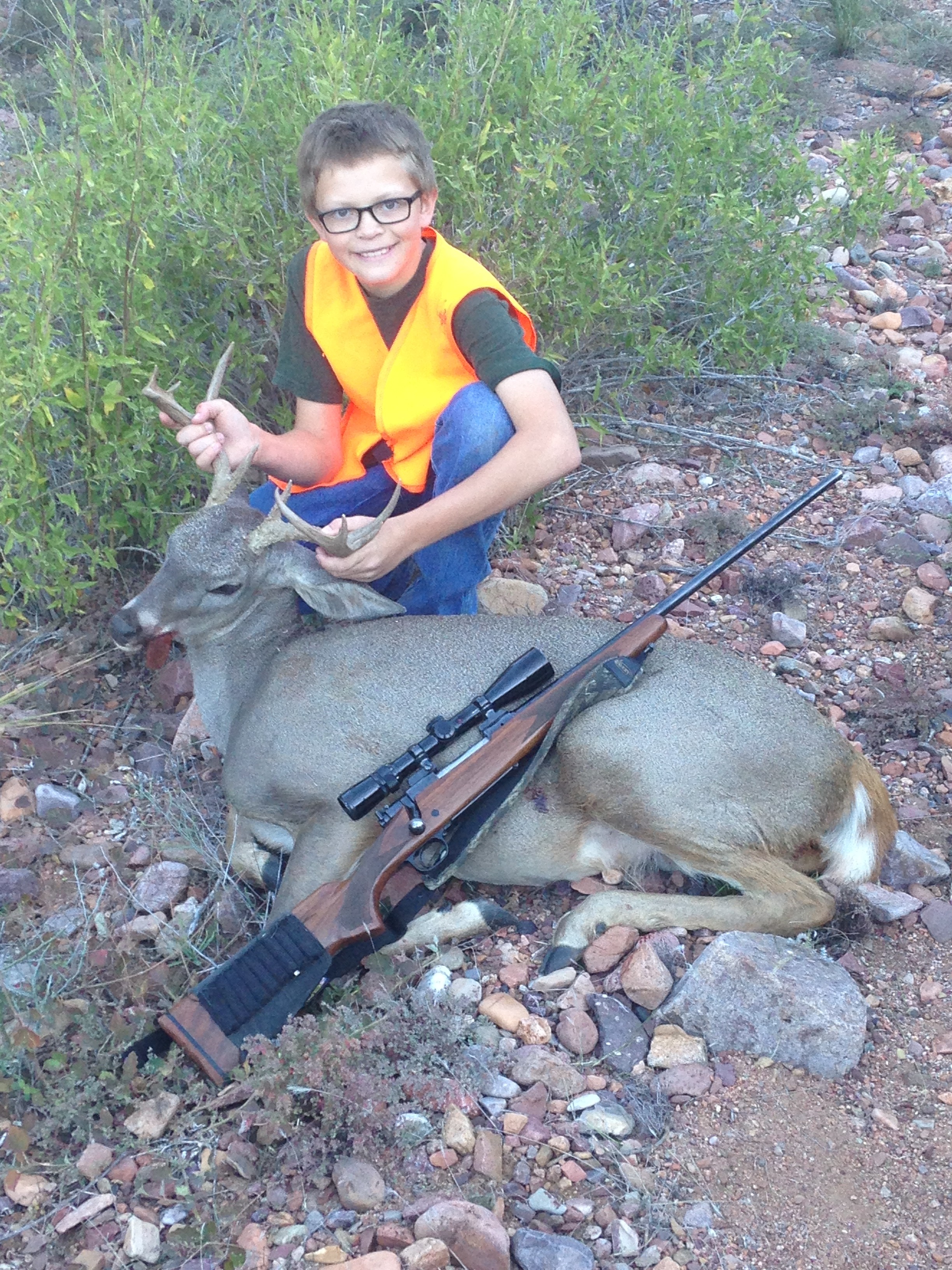 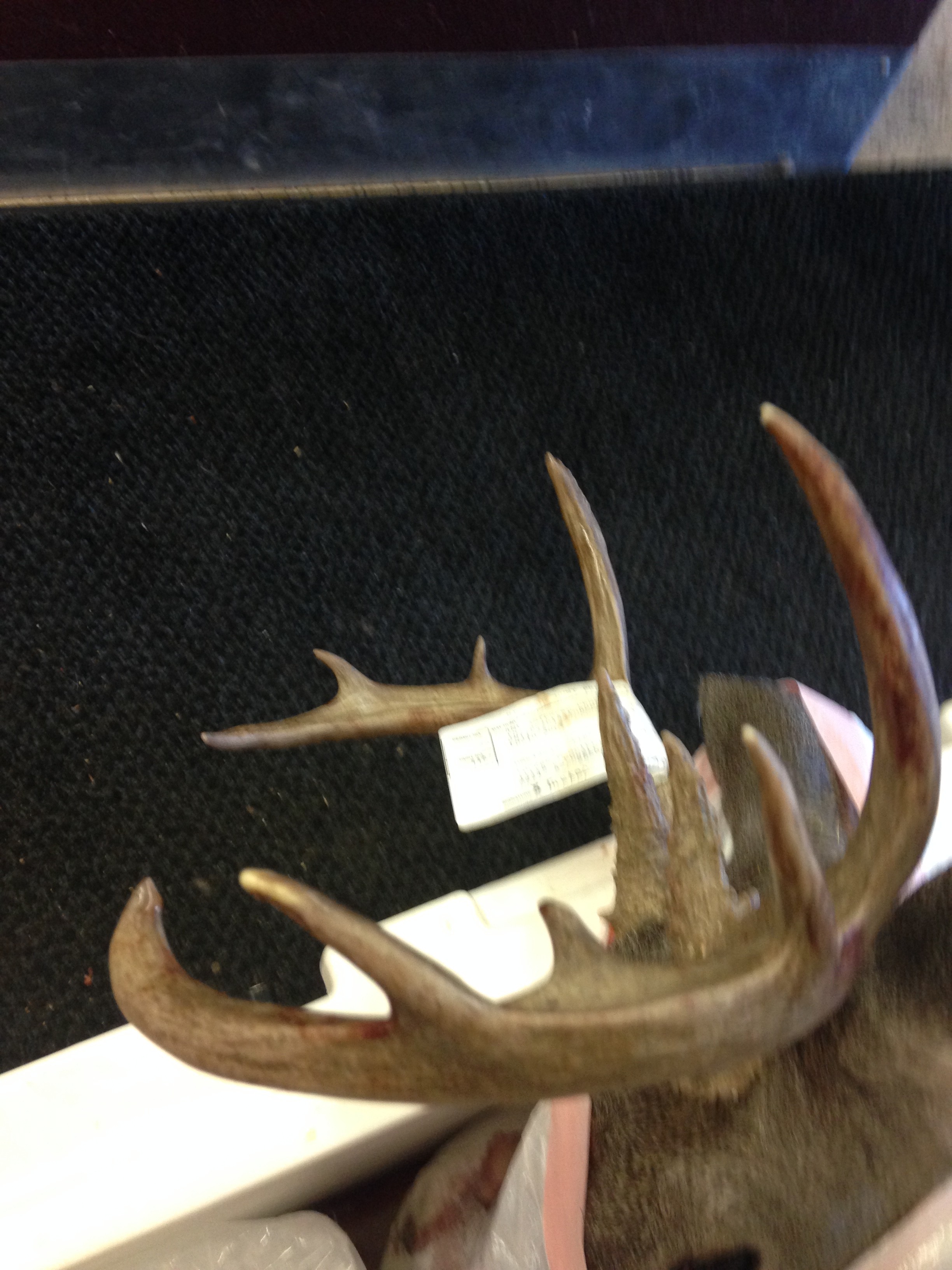 we saw several beautiful sunsets and had another family hunting trip that will go down in history, these kids will never forget these moments i assure you! 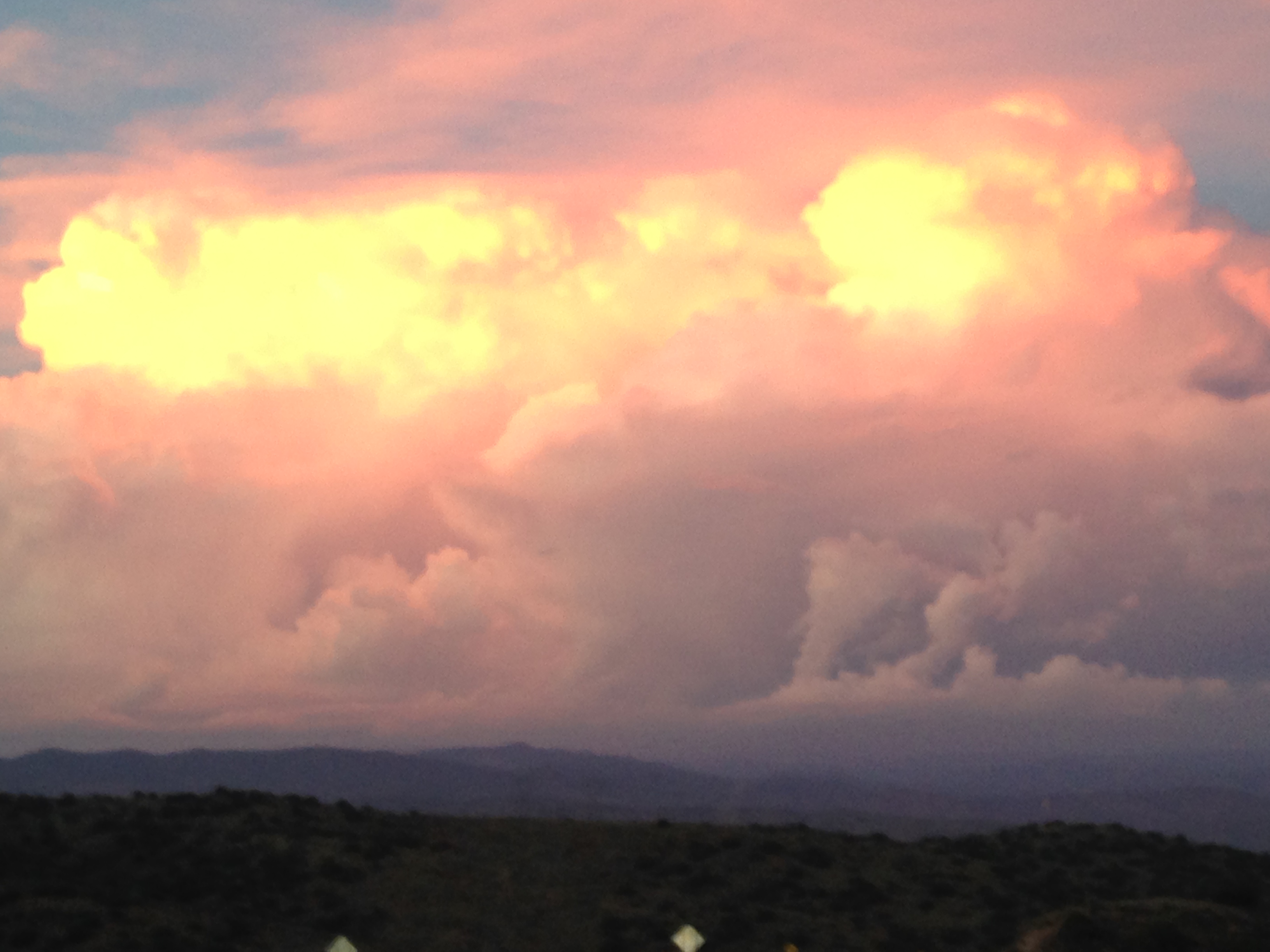 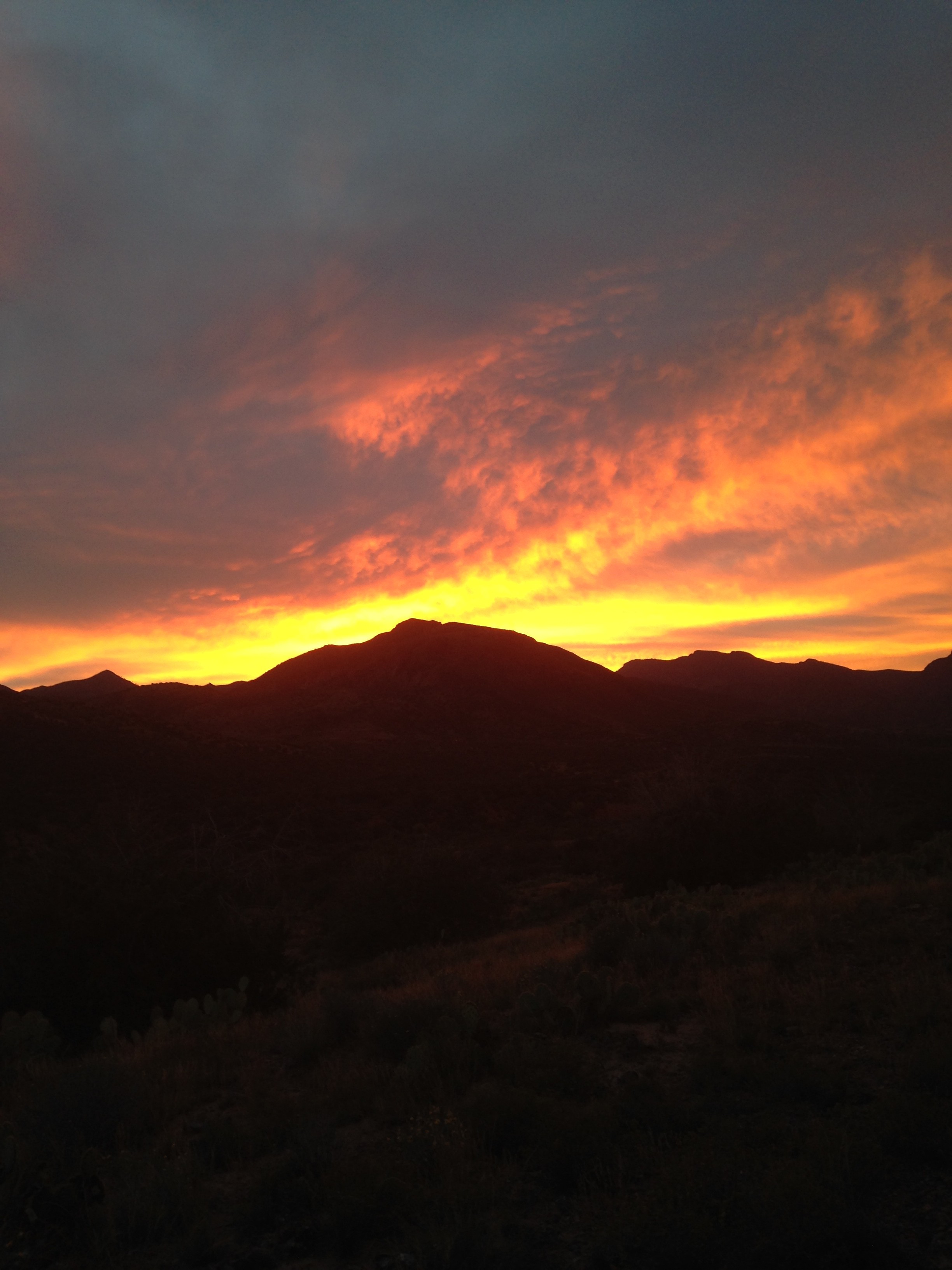 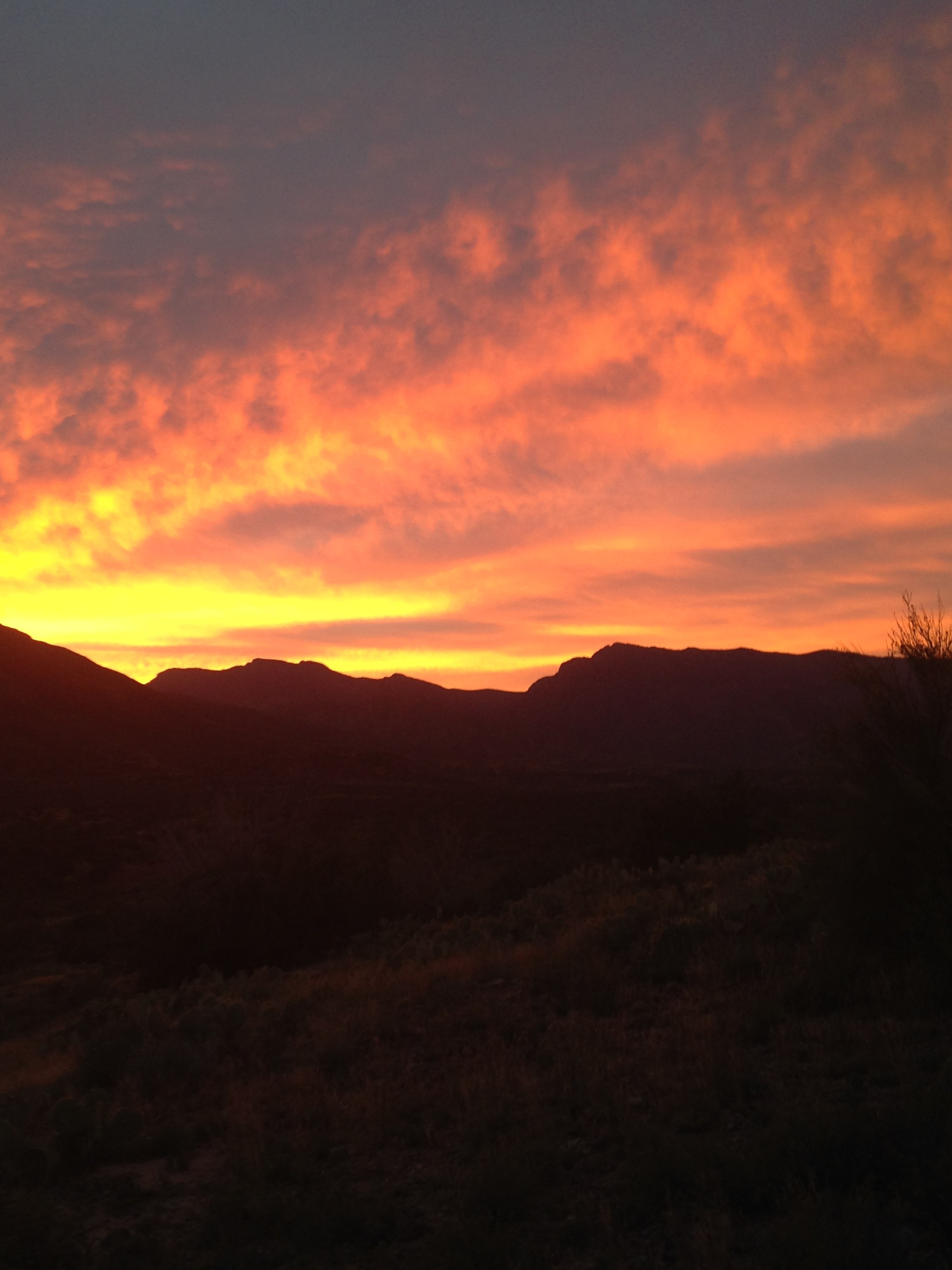 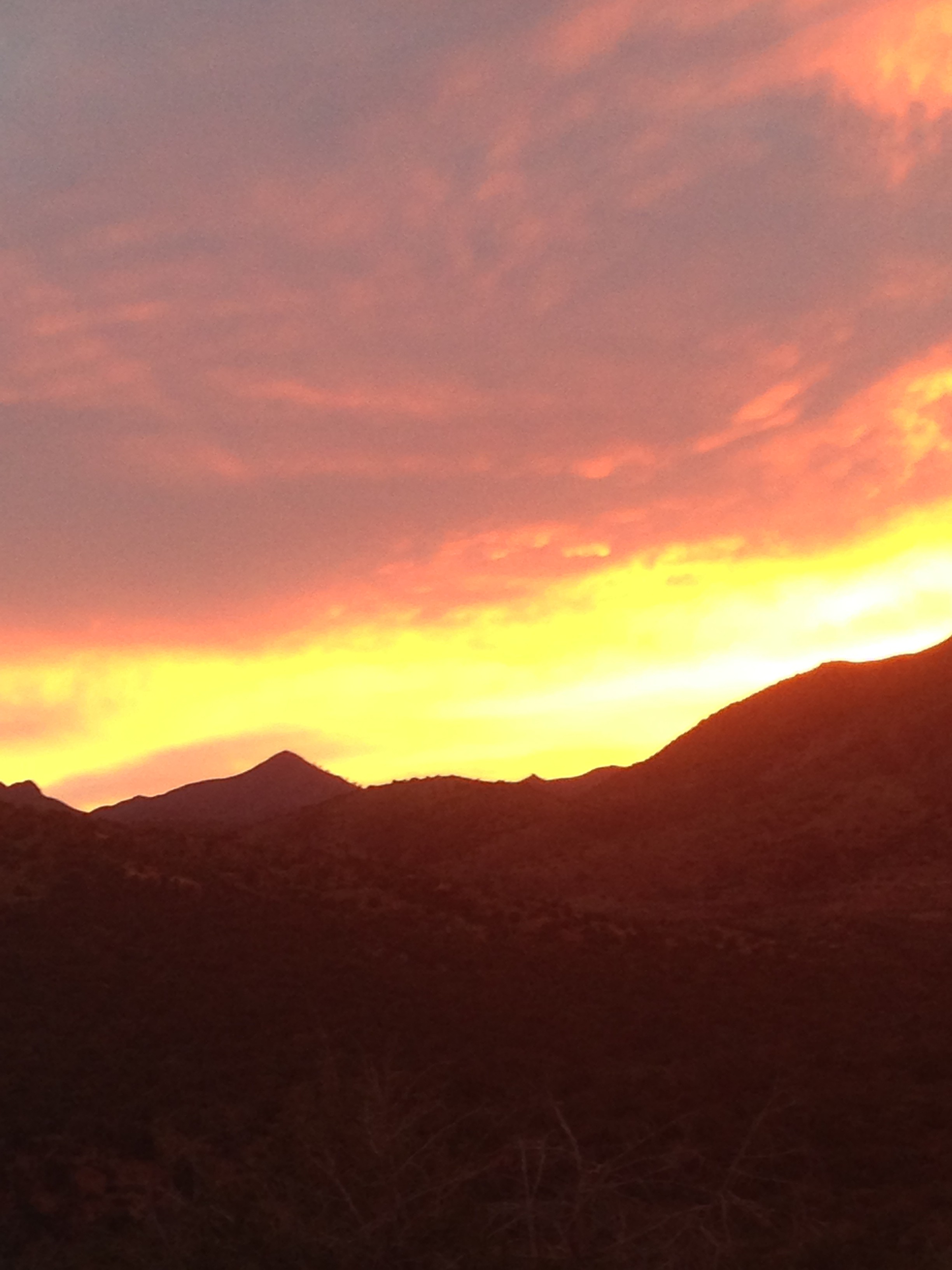