FROM my high vantage point, I could not observe a single field of planted or harvested corn, sorghum, alfalfa, wheat or beans. Not even a food plot and I doubted that any of these conditions existed within hundreds of miles. What vegetation I could identify and some that I could not, was cats claw brush, mesquite trees, barrel and prickly pear cactus, various grasses and other forms of thorn brush. Much of this vegetation wanted to grab or stick you and this seemed like a strange environment to hunt whitetails.

IT WAS mid January and I had just moved my tent camp from a hunting area northeast of Tucson, Arizona to just 25 miles north of the Mexican border. While I had seen four good bucks and quite a few does during my five-day stay, the previous area of open country with parallel grass covered ridges and valleys, scattered mesquite trees and brush, was not very bow hunter friendly and more suited to long-range rifle deer hunting. Archery close was my goal and I needed to find a more suitable environment.

THREE years previous, I had harvested my first Coues buck, just a forked buck, but a “gray ghost” as many call this small subspecies to its larger whitetail cousins to the north and mid-west. A mature buck may field dress at 100 pounds but 85 to 95 pounds is normal. The Pope and Young minimum is 65 inches, so a 100-inch buck is quite a trophy, especially with bow and arrow. The Arizona state archery record is PY 124 and the world record is 130 1/8.

GROWING up in Ohio, I had continued to bow hunt whitetail deer in Kansas, Nebraska, Missouri, and Colorado where I have resided for the past seventeen years, so I am knowledgeable of deer tactics and it was time to put some of those mid-western tactics to work. In my truck was a tree stand and Double Bull blind, but my main equipment and tactics would be my camouflage outfit, boots, knee-pads and then to spot and stalk, still-hunt or to set up in a stationary ambush location. I have always liked hunting off the ground as one can quickly change locations if the conditions change. There is no doubt that Coues whitetails can be hunted in the Arizona timbered mountains, the higher grassland plateaus, and lower river and stream bottoms, usually between 4,000 and 6,000 feet. It was the lower stream bottoms that I would focus on during this second week of hunting. If not successful, I would move farther east to the high elevations and timbered ridges. Also, if I needed to get farther back in a remote area, my backpack and bivy sack would provide home for a few days. Being prepared for all hunting conditions is a key factor when making these long-range trips.

HEADING to a tree-lined stream bottom that I had hunted three years before, I was well aware of the challenge and suspense of hunting public land, in that a hunter may not know what to expect, what quality of animals are in the area or what the competition from other hunters might be. I knew this vast area had potential even though, during the previous three months, there had been both archery and rifle deer seasons. What I did have in my favor was that the month of January was archery only hunting and the deer rut should be in full swing.

AFTER arriving early the next morning, I set up camp next to my truck in a shaded grove of trees. Around 9:00 a.m., I was eager to again explore this stream bottom so I gathered my gear and headed up stream for a mile. Not only was I looking for fresh deer sign, but also for the possibility of finding a suitable cottonwood tree for my tree stand at a good stream crossing where deer transitioned from one side of the valley to the other. I knew of a transitional area just up ahead where two gullies met the stream bottom and were divided by a three-acre mesquite tree flat. One side of the flat ran uphill into the surrounding open countryside and the other side was shaded along a 100-yard wide stream bottom. It seemed like an ideal ambush spot.

WELL, what better deer sign than real deer! I spied them 60 yards ahead, moving away, as I carefully approached the flat. A doe and a yearling I expected, but when I got to my knees for a better look under the mesquite trees, I saw a small 3×3 antlered buck following a doe. I noted the time to be 10:15 a.m. After they moved away, I spent a few minutes, quietly exploring the flat and found two good natural blinds. The use of them would be dependent on the wind direction and I stayed the remainder of the afternoon keeping vigilant for deer, but none were spotted. Unlike the previous week in the wide-open terrain where I could spot deer a mile away with my tripod mounted binoculars, this new location would limit my visibility to less than 70 yards. I liked the odds here! Archery close for sure!

THE hike back in the morning was into a cool northeast breeze and I arrived at the flat just before the sun’s rays broke the eastern horizon. The change in wind direction during the night brought a new freshness to the air and I had high expectations for this day. The full moon of the previous week was waning and the early morning sky was cloudless.

IT was not long before the first doe showed up as she traveled along the opposite edge of the flat. A half hour later, two does and yearlings grazed through just twenty yards away. Just prior to 9:00 a.m., a string of five does followed by the same 3×3 buck I had seen the day before followed a trail to my left. The buck hesitated in a shooting lane and was I tempted to take him but never picked up my bow which was leaning against a tree trunk within arm’s reach. At 10:15 a.m., a doe that was feeding in front of me at 20 yards picked me out. I may have moved too much because kneeling that long had started to cramp my legs. The stare-down began; a stare down that could have disastrous effects later.

JUST then, sixty yards to my left, a larger buck showed up following another doe as my stare-down continued with the alert doe in front of me! I could make out his body parts but what was impressive was his set of antlers and I dared not move too quickly as not to spook the nearby doe. This situation was becoming very intense! The doe that the buck had been following came through a shooting lane at 25 yards but the mature buck’s instincts, once he noticed the alert doe to my front, came into high gear and he froze in place behind some clutter. I slowly reached for my grunt call and gave out four light buck grunts. The larger buck’s head jerked in my direction and a few seconds later he stepped forward a few yards and into the shooting lane. Now or never as I slowly reached for my Martin compound bow, drew the arrow back, estimated the distance and pressed the release trigger.

I MISSED and the arrow sailed just an inch over the buck’s back! My heart, which had been in my throat, was now in my stomach as the buck turned and followed his hot doe out of sight. I closed my eyes, shook my head and sank lower on my knees, deflated for sure! The doe in front of me scampered away and joined another doe on the other side of the flat. The opportunity to harvest a great buck, the largest antlered one I had seen in four years of hunting Coues deer, has just been blown.

BUT LUCK was with me as a half hour later I again spotted the buck following the doe out of the flat. I grunted a few times hoping he would hear and return to investigate but he continued up the hill into the adjacent hillside. The doe that had scampered away and joined another doe was still in view and later, after leaving my backpack behind, I crawled to within 30 yards of them, one feeding away and the other bedded behind some brush. I wished that I had brought along my water bottle from my backpack as the sun was up and it was getting warmer. Fifteen minutes later, the feeding doe had changed direction and was now only twenty-five yards away.

IT was high noon when the large antlered buck showed up again as he came into the flat from the same direction he had disappeared earlier. Maybe he had heard my grunt sounds after all, and thought another buck was messing with his does. He noticed the bedded doe and went right to her but she quickly got up and was not interested in his advances. I was moving a little, trying to see what the buck was doing behind some brush when I noticed the doe in front of me, looking right at me. She was on alert and did not notice the buck coming up behind her. If she busted out, she may take the buck with her. The buck touched her rear, distracting her attention from me. She spun around exposing the buck broad side at 25 yards. I slowly rose up on my knees to clear a limb, let out a breath, and within a half second heard the tell-tale thud of the arrow hitting home. The buck spun and was out of sight within seconds.

TO regroup and calm my nerves, I retrieved by backpack and returned to my shooting spot and then to where I had last seen the buck but was unable to find any tracking blood. Later, I searched the edge of the flat and then followed three different trails up into the surrounding arid hillside for fifty yards; still no blood. I knew the shot was slightly high, as I had seen 10 inches of the broadhead end of the shaft sticking out of the opposite hip. I believed most of the blood was being trapped internally, once the arrow had penetrated just behind the shoulder. Next, I began to develop a twenty-yard search radius from where the buck left the flat, being very vigilant because of the many shallow depredations in the rocky landscape. To my good fortune, on the third circle I found him! The gray ghost of this strange whitetail habitat was down having traveled 125 yards from where he was hit. Losing him was not an option and I guess forty years of bow hunting had taught me some tracking skills and developed within me, a never give up attitude.

About the author: He is 69 years old and retired, but his passion for bow hunting, usually solo, is still burning within. For the past six years he has served on the Colorado Bowhunter Association Board of Directors as the Colorado Division of Wildlife’s Liaison, and he has also harvested the “Colorado Big Eight” big game species. Paul encourages all bow hunters to join their state’s bow hunting organization. 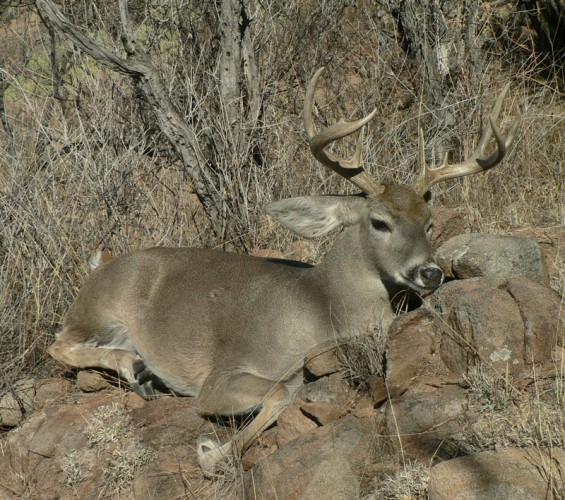 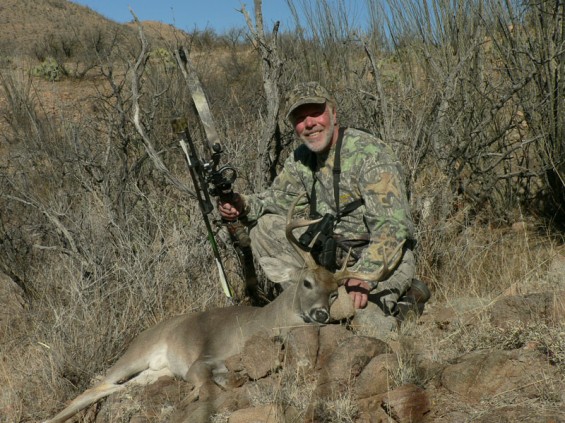