Last year was the first year my wife, Joe, Matt, and I had drawn whitetail tags, which was for the first October hunt. All four of us tagged out with Michelle’s scoring 98″+ and Joe’s at 107″. (You can read the hunt story from last year, by clicking here). Needless to say we were addicted. This year three of us got lucky and drew the same unit but for the December hunt. The only problem we had was it was a good year for tags as my brother and I drew archery elk and archery antelope tags also. We knew our scouting time was going to be limited but we figured we had it good if our only problems were getting to many tags. In September I took a antelope that will score close to 80″ and a bull in the 270″ class in the late November archery hunt. Our November archery bull tags took all of our time that we planned on scouting for deer, so we were not able to scout until two days before opening day.

During the two days of scouting we found deer absolutely everywhere we looked. We didn’t see anything big but we figured with the amount of does we had found the big ones wouldn’t be to far away. We did manage to glass up a big male bear and a big mountain lion, which my wife ended up missing three times on the 8th day, two days before the hunt. This year I wanted to find a buck big enough to rule the household once again since last year my wife’s first deer was blew my deer out of the water. I also wanted to get a buck worthy of a story beside my wife’s and brother’s story on Amanda’s website.

Opening morning was almost perfect. It was freezing cold, snow on the ground, and after the fog lifted clear skies. The only problem was I didn’t see a single whitetail deer. Talk about opening day blues. We decided to move to the small mountain range that we had seen the mountain lion on. My brother wasn’t so sure we should be hunting these hills after he seen the mountain lion. He thought the lion would have the hills cleared of good bucks. Boy was he wrong.

My wife and I reached a rocky peak we’d climbed to glass for the evening around 4:15. Around 4:30 I spotted a decent buck coming around the backside of another hill about 1500 yards away. I turned around to explain to my wife where the deer was and when I looked back through the 15×56 binoculars I saw this great buck following the first buck. From that distance I couldn’t make out exact dimensions but I knew he was a shooter. He looked to be real wide and heavy but I was unsure of how many points he had. My wife continued watching him as I literally ran up and down a canyon in between us and the deer. When I got to the closest point I could find I set up the binos and started looking for him again. The sun was starting to set and I knew light would be a factor soon. After what seemed like and eternity I finally found the buck but when I tried to range him the furthest my rangefinder would mark was 454 yards. I had been practicing out to 500 yards with my .308 shooting 150 gr. ballistic tips bullets. I knew if I could get him broadside I would be able to make this shot. Even though the buck was slowly feeding with a few other bucks I was having trouble finding him in my Leupold 3x9x50 scope. I was switching back and forth from my binos to the scope trying to find him. When I finally found him I waited for him to walk out from behind a mesquite tree. When he came out I felt surprisingly calm and held my 500 yard mark on his back. Unfortunately when I fired he trotted about 30 yards and started looking around. I figured I hit low since he was looking around not sure of what just happened. Fortunately he starting feeding right back to the exact same spot I’d shot at him. After another round of switching from the binos to the scope I settled my cross hairs just a little higher than the first shot. This time the bullet found it’s mark in the spine and dropped the deer in his tracks. I didn’t have much time to get to the deer before it got dark so once again I took off running across another canyon. I had my wife guide me into where she last saw the deer and I was able to find him just as it was getting dark. The mountain I was on was very rocky and steep so I tied the deer to a mesquite tree and my brother, wife, and I returned the next day to take pictures and pack him off the hill. On the way up we tried ranging the shot again and came up with a distance of close to 600 yards.

My opening day buck is my second and biggest whitetail. Not bad for my second year hunting these beautiful animals. My deer has and outside spread of 19 1/2 inches and a couple of extra small points to add alot of character. His antlers get heavier the further down the main beam, which are over 17″. The deer should gross a tad bit over 105″. I’m very pleased to have taken a nice coues buck unguided on public land and look forward to being able to hunt these deer again. My wife also took here second deer a few days later. Here deer will score 85+. Her buck had a body and head that to me looked gigantic for the usually small coues deer. It took alot to pack her deer off the mountain whole. Unfortunately the third hunter in our party had only a few days to hunt but did have a shot at a big buck and a few decent shooters. Of the three animals I took this year, by far, my favorite is hunting the coues whitetail. 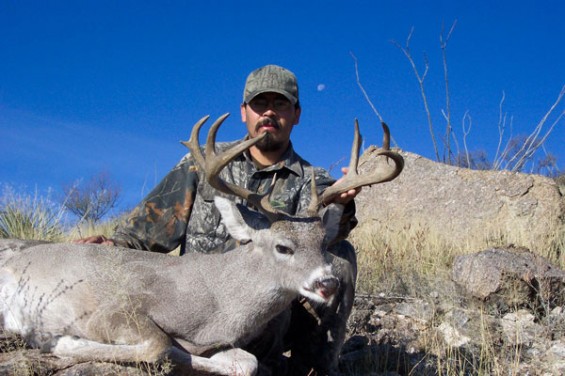 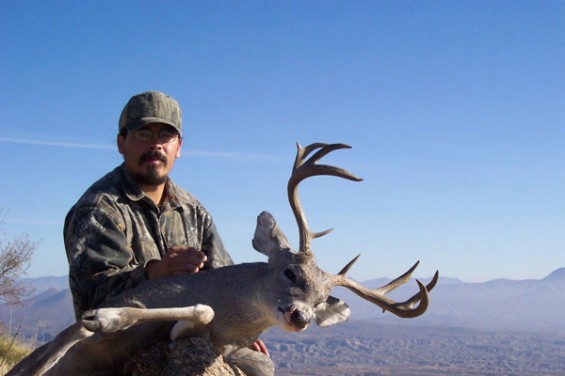