Ben would like to thank Tyler and Brandon Leister for their help on this hunt.

Here is what Ben had to say about his hunt:

The deer was about a mile away when we spotted him, he was with two does. My brother and I were hunting, Brandon had went home at Christmas. We spotted this deer on the 24th so we knew he was there. I had also seen 2 nice bucks in there on the second day of the hunt Saturday, but it was so early i passed them up (This was the first deer hunt I have ever passed up deer on). we spotted him and I stalked him for about 45 minutes and I came to a saddle where I couldn’t get any closer. I decided to take a shot and I hit him on the first shot. But not very good. Turns out I hit him in the leg. They were so far away still that they didn’t spook. He was just going where the doe went. I shot two more times and missed. Then I took plenty of time when I knew they weren’t going anywhere and hit him in the lungs.

We had a 400 yd rangefinder hat read 380 yds quite a ways down the hill from where I shot him. I didn’t realize he was so far when I shot him. I guess I was pretty lucky, but it all worked out. On the hunt we saw quite a few deer.

We were glassing one day and watched a guy kill a really small 3 point about 8 or 9 hundred yards away. That was exciting to see. We were watching a bigger buck and they shot a deer below where he was at.

My little brother scored my buck as if his G3 on the right side wasn’t broken and he scored 89 and some change. The deer has a 16 inch inside spread. 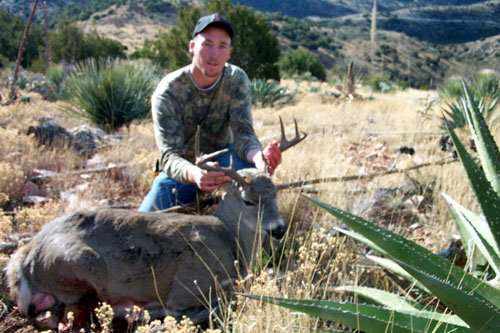