First thing, it was hard to find a place to hunt because of the years of drought we have had here in AZ. But with my natural instinct of the grey ghost, I have in the units of 31 and 32, I decided to scout the area of 31 in the Pinaleno mountains. I know this area like the back of my hand and scouted for weeks before the August/September season opened. Now of course, I had to wait till the forest reopened so I could do this task. I put up several tree stands and took several live pics of the Coues deer, and also video to finally decide where to hunt. I hunted all season and helped my fiance try to get her deer, but with the shots she missed, of course this means no deer.

I had hunted for the whole season and passing up several bucks, I was sure that i would find my nice buck. Sure enough, on September 17th, I was in my tree stand and it was about 5:30 pm. I hear something coming down the trail. It was a nice non-typical 4 point on both sides not counting his brow tines. He moves in to about 19 yards and for some reason, I missed the shot. I was frustrated and after about 10 minutes, I went started down my stand when I saw this beautiful buck coming down the same trail. Now in the earlier season I was able to get both bucks on video and trail cam pics, but not when they both have fully grown antlers. So I knew this was a nice buck and took a 22 yard shot with great impact. The buck ran about 25 yards and dropped. Now it was about 6:00 pm and starting to get dark. Finally I got the nice 2 x 2 back to my truck. It is at the taxidermist right now and hope to get it back soon. The bucks antlers were 17 1/2 inches wide and 14 inches tall. He net scored 92 7/8 inches. Not bad for a 2 point. After the butcher was finished, I received 70 pounds of meet that fed my family for months. This hunt was completed on September 17, 2002 at 6 pm in unit 31. 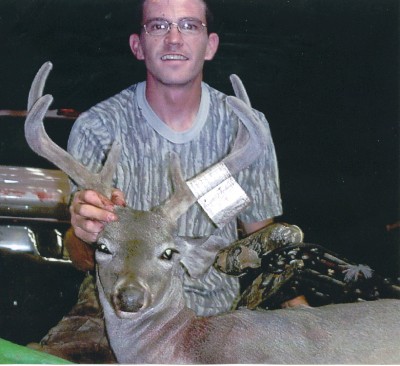