Once again, Butch and his son glassed him up a nice buck at about 500 yards away. And once again, they were on the top of one mountain, and he was across the canyon on the adjacent mountain. They watched the buck bed down under a big oak tree. Butch told Mike to keep an eye on him while he put the stalk on him. Mike and Butch were in constant contact with miniature walkie talkies. It took Butch what felt like an hour to circle around the mountain that they were standing on, and arrive at a large rock outcropping that was about 300 yards away from the buck. He got settled in at the outcropping and spotted the buck napping under the oak tree. Mike told him, that the deer never moved, the whole time he was moving to the new vantage point. It was about 12 noon when Butch arrived at the outcropping. He figured it would be best if he just waited until the buck decided to get up and start feeding again. Well, they watched that buck lying there under that tree until 4:00 P.M. They were losing daylight fast and he still hadn’t got up. Mike suggested that Butch shoot a round at a big boulder that was directly behind the big guy and see if that would get him to stand up. With no other options coming to mind, Butch did as Mike suggested. The round slammed into that rock just above the buck’s head. He reacted just as they had hoped. He stood up and ran out from under the tree and suddenly stopped. He was looking back at the tree trying to figure out what had just happened. Unfortunately for him, he also presented another perfect broadside shot. Butch took his time, held the crosshairs even with the top of his shoulders, and squeezed off a round from his .270. After he recovered from the recoil of the rifle, he could not find him in his scope. Butch searched the mountain up and down, and could not see him. About that time, Mike was on the walkie talkie excitedly telling him that the buck had jumped straight up in the air, and fell behind a large clump of bear grass. He said, that the deer never got up again after he hit the ground. Mike said, that it was exciting to watch everything unfold through his binoculars. He said that, if he had a video camera with him, he probably could have put the tape on the next issue of “Buckmasters”. 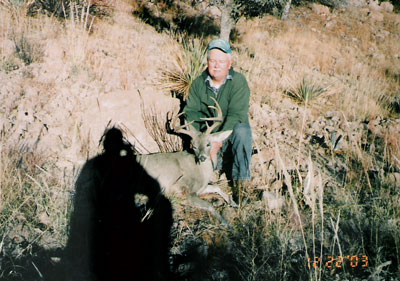 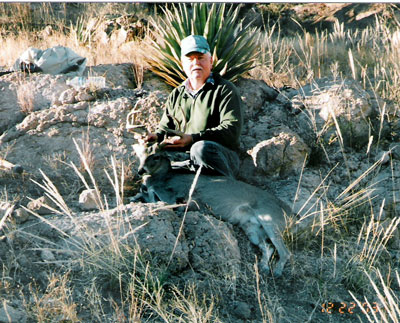 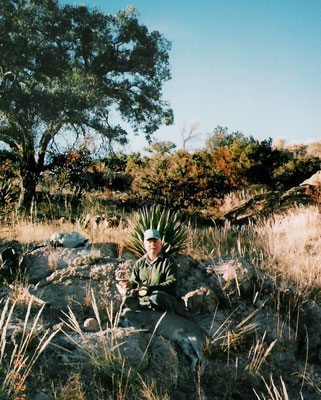