Here is a little story about the hunt”

“I was in a stand and about ready to leave in fact I had the string tied on to the top cam of my bow when I looked up one last time and here come three bucks trotting in. My heart started to pump harder than ever because I knew they would’nt stay long. I started to try and untie the string from my bow with my hands shaking with buck fever. (I love that feeling) I finally got it untied and had to turn around in my stand. ( I was standing up facing the tree, because I was about to get down. ) As I did I saw the big one front and center and started to draw when I realized that the string had fallen from the top cam and had got caught up on the bottom cam. As I drew the bow the string was wrapping up in the cam but I knew this was my only chance. If I let down and tried to untangle the string it would be over, so I took it back to full draw and hoped that the string was weathered enough that the bow would over power the string and my arrow would stay true. By this time the buck had turned quartering away and I put the correct pin on the middle of his rib cage and released. The bow sounded different as it ripped the string and the arrow hit a little back of its intended mark but he was quartering away so I knew when I saw it enter it was a good hit. All three deer ran off and the one I hit went behind a tree so I could not see him. The other two deer stopped milled around and then bedded down. I waited a couple hours meanwhile the two bucks eventually got up and fed on out. I got down and went over to take a look an I was obviously as happy as I could be. Our pictures of him last year were good but he put on even more.” 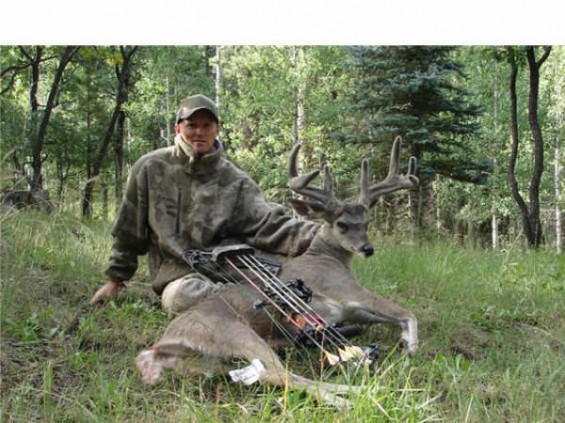 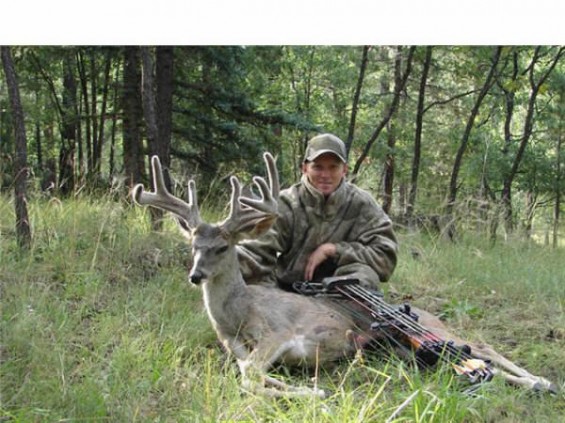