My 2003 deer hunt began the day that my 2002 hunt ended. After harvesting a very nice 82 inch typical on the last day, I was hooked for life. In December, my dad had a deer hunt and I considered that hunt practice for my next hunt. I practiced skills such as glassing, hiking, judging deer, and judging distances. Although my dad didn’t kill a deer, the practice was awesome and being outdoors was the best.

After I found out that I had drawn a November whitetail tag, I spent many days and hours preparing for the hunt before I left for college. I spent a total of 5 days at the range. After lots of practice, I got the size of my group down to about a ½”, the size that everyman dreams about and the size that ever hunter wants. My dad and I have bought a lot of expensive hunting gear this year and hopefully, it will end up in two bucks for us. Well here’s the story:

I recently started my first semester at Northern Arizona University, thus making my time for hunting few and far between. But, due to Veterans Day and having no classes on Friday, I was able to take two days off of school to hunt a total of 6 days! I left for Tucson at 11:30 Thursday, November 6th, a day before the opener. The ride home went smooth and when I got there, my dad already had the truck packed up and ready to go. All I had to do was get my clothes and my but in the truck and we could leave! We got to our first camp at about 6 at night, to dark to go glass so we just set up camp.

Opening morning finally came and my dad and I got up, got dressed ate some food and went on down the road to a wash. Once we got to the wash, we walked for a half of an hour to our first glassing point. Once we got to the top of a tall ridge, I set up our Docters and not 5 minutes into glassing, I glassed up four deer, all bucks. I thought wow what a good way to start the day. They were about 800 yards. We decided to go down off of the ridge we were on to a middle ridge that would put us into position for a 400-500 yard shot. I felt it was within my range if I knew the distance and could set up my bipod. Once we got to the ridge, I glassed where the deer were and they were not there. I later found them about 300 yards from where they were and about 600-700 yards from us, to far for a shot on the first day. I turned around and started glassing the other direction. I was looking at this huge hawk when 3 does’ ran through my field of view; I continued watching the same spot, four more deer, and all bucks! One of them I estimated to be a tall, heavy 3×3 that would go around or close to 90. Right before we packed up, I saw him aggressively rubbing a tree branch. When dad and I got back to the ridge we were on at first, we could not find them. The day ended up with us glassing about 10-12 more deer but no bucks. That night we stayed in camp. My 7 year old brother and neighbor came into camp that night. The next two days ended up with no more bucks spotted and few does’ the weather got increasingly hot and sunny.

Monday morning found us moving to a new place after going home for a good night’s sleep, a shower and a home cooked meal. That morning we went to one of our favorite places where we had seen some good bucks in there on my dad’s December hunt the year before. Monday morning my dad and I only saw 7 deer, all does’. When we got back to camp, our hunting partner had said that he had seen 2 little bucks. That day was somewhat cold and overcast. Because of the weather, my hunting partner went out a little earlier then usual. My dad decided to stay at camp and get dinner going. We left camp at about 1:30 by 1:35, we had already jumped one deer, and we couldn’t tell if it was a buck or a doe because we jumped it so fast. We walked over and around 2 more ridges. We were just standing on this one ridge at about 2:00 that had a little canyon in the bottom and I looked up to see a decent 3×3 and a littler 2×3 trying to sneak out of the canyon, I told my partner that they were coming out and I shouldered my rifle. They were trotting up the hill at a quartering away angle at about 75 yards and I didn’t have but the back to shoot at. My rifle is sighted in 3 inches high at 100 yards, but I didn’t even think about aiming low so I put it right on it back and squeezed. The bullet went right over the deer’s back, I am so confident in my ability to shoot with my gun that I was somewhat shocked that the deer didn’t drop. I put another one in the chamber and squeezed it off, once again right over the back. By this time, my hunting partner was ready to shoot and on his first shot he knocked down the bigger one, he then finished it off and watched me shoot my buck. Once I saw the big one down, I went to the second buck, he was running broadside farther up the hill by now, about 125 yards. I touched one off and he fell, he tried to get back up because it was a gut shot and I put my hand loaded bullet through his front shoulder and ripped a whole in his heart. And that was it, less than a ½ mile from camp at 2:00 in the afternoon, we had two bucks down. I called my dad on the radio and told him how to get to where we were. After some pictures, we began the work and eventually got the deer back to camp and skinned. While I was skinning my deer, I found the lead from the bullet that went through his shoulder and it was a perfect mushroom.

Over the next few days, we were looking for a buck for my dad with no success. On the second Friday night, we went to the place that I shot my deer last year. That day, we drove a mile or so down the road from camp and hunted. Right off the bat, we glassed up a spike, dad wasn’t interested on shooting him. We walked around the hill and glassed two more bucks. A littler for and a spike, once again dad wasn’t interested. The rest of the day ended with the deer bedding extremely early and a sighting of only a few more does. Although dad didn’t get one, it was still a good hunt and maybe one of these days hell let some lead fly at a deer. 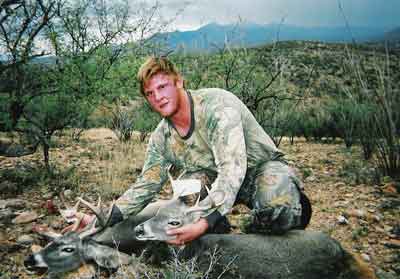 This photo shows Casey with his 2003 buck and a friend’s.