May 18, 2012 by CouesWhitetail in Biology with 0 Comments 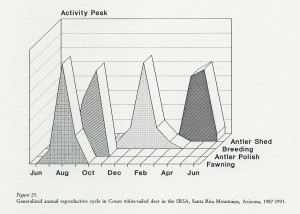 This graphic shows the peaks of activity for several of the life stages of Coues whitetail. Data and graphic are from the Arizona Game and Fish publication entitled "General Ecology of the Coues White-tailed Deer in the Santa Rita Mountains". Click on image to see larger view. Read the sections below for more detail about the life stages of Coues deer.

The breeding season for the Coues deer is about 6-8 weeks later than northern or eastern whitetail. Breeding generally occurs from December to February with the peak usually in January. Some breeding activity can occur in November and some even as late as March. In November, bucks are generally found in small herds and can be seen sparring to establish dominance for the upcoming breeding season. These sparring matches are generally very short-lived and mild. They are much less dramatic than the spectacular battles that can occur during the rut. Bucks spend the breeding season searching for does in estrus (those ready to breed). Females are receptive to breeding for only 2-3 days. Females that are not bred in their first estrus cycle may be bred during their next cycle about 26 days later. Bucks can be very aggressive toward does during the breeding season. I have seen them chase a doe in a frantic effort to keep them from running away. They herd the doe much like a horse herds a calf or a sheepdog herds sheep, not allowing them to escape. If there are other bucks present around the doe, the dominant buck will usually be closest to the doe and force the other bucks to stay in the periphery. Bucks are most vulnerable to hunters during the rutting period because they are much more active throughout the day and rather careless in their single-minded pursuit of females.

Reproduction is highly influenced by the nutritional condition of bucks and does. Bucks that do not receive adequate nutrition can have delayed antler development which can lead to an extended rut period. Similarly, does in poor condition can have delayed cycles which can result in later fawning dates. Smith (1984) found that in a drought year in Arizona the average Coues fawning date was in the third week in August. Whereas in a year following several years of exceptional rainfall, the average fawning date was 2 weeks earlier. This 2 week difference in breeding activity has been documented in other whitetail subspecies for does on a nutritious diet compared to a substandard diet (Verme 1965). Smith (1984) also found that in years of poor food production, young Coues does (< 3 yrs old) may not breed at all and although the older does may still produce fawns, they have fewer of them (singles vs. twins). I have not seen any documentation in the literature that Coues deer can have triplets, but I have seen a Coues doe with three fawns in Arizona, which I presume were all her fawns. The fawns were of identical size and condition and were all following the one doe. It could be that she "adopted" a fawn from another doe that was killed, but that is probably less likely than her having had triplets. Production of triplets has been documented in other subspecies of whitetail. 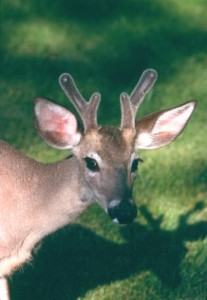 Antlers are made of the fastest growing bone in the animal kingdom. Antlers are grown and shed annually, which in itself is amazing. In addition, generally, each year a deer’s antlers will grow larger than in the previous year. The annual cycle of antler development is primarily controlled by hormones produced in the pituitary gland and testes. Increasing daylength stimulates the pituitary gland to secrete substances that cause antler growth to start. Antlers receive the nutrients needed for growth through a fur covered skin (called velvet) covering the antlers. During this velvet period, the antlers are very sensitive to damage. If a buck injures his antler during this time, it will generally cause abnormal antler growth in the form of non-typical tines or bumps. These abnormalities may continue to be seen through each subsequent year’s antlers. In addition, it has been shown that in antler producing cervids (deer, elk) that an injury to the body will sometimes cause abnormal antler growth on the opposite side. For example if an elk injures his front right leg, the antler growing on his left side may become deformed. Later, the pituitary gland also secretes gonadotropin which causes the testes to enlarge. As the testes enlarge they produce an abundance of androgen which inhibits the pituitary antler-growth hormone, resulting in the stoppage of antler growth and the drying of the velvet covering on the antler. Antlers are eventually shed as changes in hormones cause the decalcification in the pedicle (the living bony growth on the frontal bone of the skull to which the antlers are attached).

Just as the breeding season for Coues is 6-8 weeks later than that for other subspecies of whitetail, the antler cycle is similarly delayed. For Coues deer, antler growth happens from June-September. During that time, the antlers are covered with “velvet”. After the buck has completed antler growth, the velvet dries up and is rubbed off (antler polish). In Arizona, Coues deer typically polish their antlers from late September to mid-October. Originally the antlers are white but become stained brownish from blood in the velvet and from the juices in the trees and bushes that the buck rubs his antlers against. Antlers are then used during the breeding season to secure mates through displays and fighting with other bucks. After the breeding season, hormonal changes cause the antlers to drop off. In Arizona, that antler drop typically occurs in April and May. Growth of the new antler begins shortly after antler cast. 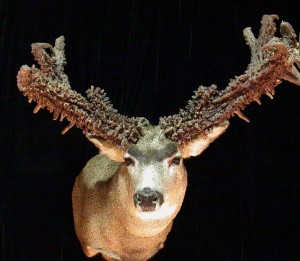 This is a picture of a mule deer buck, but I am using it to show what can happen with abnormal hormone production. Most likely his testicles were injured in some way so that he did not have the full range of hormone cycling. This buck never shed his antlers and the antlers stayed covered in velvet (velvet has been removed in photo above). The antlers grew year-round but in a very abnormal fashion. The antlers never solidified and they are very light, like balsa wood. This buck is one of the largest "cactus" bucks ever and he probably grew those antlers for 8-10 years before being shot by Ozzie Washburn in Chama, New Mexico. This buck is in the Roger Selner trophy deer collection which travels around to many of the hunting shows throughout the country. Photo by A. Moors. 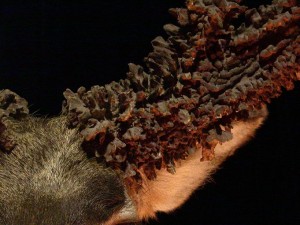 This is a closeup of that buck's antlers. Photo by A. Moors. 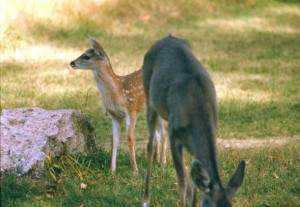 Does that become pregnant will give birth to fawn(s) about 180-200 days later. Yearlings tend to give birth to single fawns while older does generally give birth to twins. Nutritional condition of the does and bucks influences by the timing of fawn drop and number of young produced (see discussion of this in the breeding section above). Most fawns are born in July and August. Fawns will weigh between 4-6 pounds at birth and nurse for two to three months. Fawns can eat some vegetation even while still dependent on the mother’s milk during the first month. In Arizona, nursing tends to occur between 0800-1000 and 1500-1800 hours. Fawns have spots on their coats for about the first two months of their lives. Fawns will stay with their mother until she drives them off, which usually happens just before she gives birth again the following year. 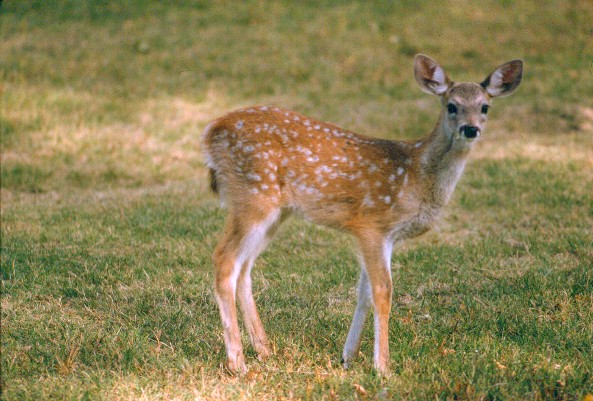