Opening day he saw 13 bucks. Late in the day he took two shots, but missed. Darren did not account for the wind that was gusting about 10-15 mph, and it was a straight-on shot, probably one he thinks he should not have taken. Or perhaps buck fever had set in.

Day two Darren once again spotted the biggest buck he had seen on the first day. Before he could make a move, the buck was startled by something on a hillside near to him. After watching several bucks, Darren went to an area that he suspected this buck was bedded. Sure enough, under the same tree he had seen a different buck the day before there he was. Darren closed the distance and put him down.

Then, he had to pack me, my gear, and the deer (quartered) 2 miles back to the truck. Needless to say, he was exhausted.

Darren thinks the buck scores about 90 inches and it has a 16 inch inside spread.

You can read more about his hunt in the discussion forum. 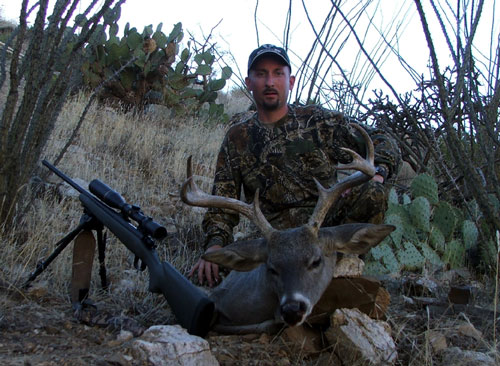