My name is Dave Vines and this is my first Coues deer. I have tried to hunt Coues deer with a bow for 5 years and have been unsuccessful this far. So this year I decided to put in for a rifle hunt in unit 34A in southern Arizona. I grew up in Patagonia but wasn’t much of a hunter in my younger days. I have put quite a few stalks on whitetail before but have never got close enough and there always seems to be Murphy’s whitetail law happening at the time of my stalk. I have been after this buck for 4 years and have watched him grow up. He was in an area where most people wouldn’t hunt for Coues deer.

I got up opening morning and went to the area where he hangs out and couldn’t find him. I saw two does and one mule deer doe and some javelina, but he was know where to be seen. I decided to go into a different area and do some glassing and picked up a couple of small bucks and a few does. My brother in-law came in to help me the second day and we climbed a tall peak on the south side of Mt. Wrightson to get a great vantage point to glass from and we saw a few deer but nothing like the size of this guy. We finished our second day of the hunt and decided we would go back into the area I went to on opening day, but we came in from a different way. We were out there before first light and started glassing as soon as we could see.

We didn’t pick up anything so we decided to make slow move up the ridge. The wind was perfect and we started making our way to the area where this buck has been seen on numerous occasions. We were walking and glassing and we picked up a doe about 600 or 700 yards away and she had us pegged. She wasn’t what we were looking for so we made our way towards her. She never moved even though we kept getting closer. We would creep over one ravine after another looking for this buck and we kept getting closer to the doe. We came up out of the next ravine and we could still see the doe, she was only about 300 yards by now and right before we peaked out the buck was right in front of us looking away in the doe’s direction. I went down instantly and told my brother in-law Glenn that the buck was standing right there. I slid off my pack and put out the legs of my bipod and then proceeded to creep up to the top of the ravine. The buck turned and looked my way but it was too late and my .270 shot true. The deer didn’t go anywhere and we ranged the distance with my rangefinder and found it to be a whopping 72 yards. 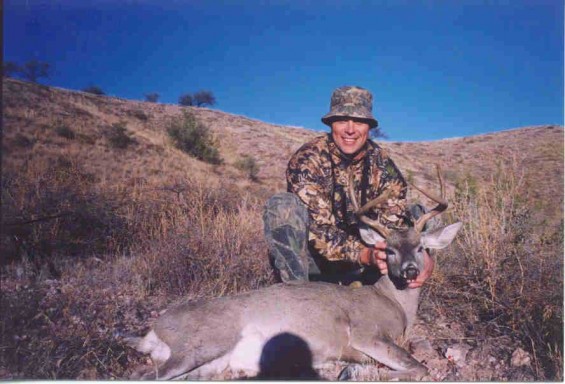