I was somewhat concerned about my opportunities to hunt while being a full-time dental student at the Arizona School of Dentistry and Oral Health. My first year of school was very busy and almost gratefully I was unable to draw any tags but still managed to help my wife get a decent bull Elk in the White Mountains. This year was somewhat more relaxed as we had already taken a Nation Board Exam and I was able to spend the time I needed to pass just fine. I was able to spend a few extra weekends helping out friends with different hunts and scouting for my November Coues Whitetail tag. I had the opportunity to shoot at a good buck the last day of the August Archery season but was rewarded only with a chipped and broken broadhead but enough excitement to last for a long time.

November came around and I found myself looking forward to opening day. A few fellow dental students had also put in and had drawn tags for southern Arizona. Having never hunted our Coues deer before I was excited to show them how difficult and rewarding the hunts can be.

One of the guys had some family emergency and had to miss out on the opening weekend. The two others stayed for school opening morning while I went ahead to hunt for myself or look for bucks for them whatever came first. I couldn’t go down the night before so 2:00 am found me on the road. I started my 2 mile hike about 4:40 and found myself overlooking some of my favorite areas a few minutes before daylight. Right after sunrise I found a great buck at close to a mile away. I watched him move toward his bedding grounds until he disappeared in a rough canyon opposite of me. After watching closely for another hour and quite sure he didn’t come out the other side I made the 3 hour hike over to where I could glass into the canyon. I soon glassed 4 bucks up and feeding about ¼ mile up the canyon. After a couple of hours of glassing I still couldn’t find the big buck and was quite sure that one of the does I had tripped up had spooked him out of the country. I decided that one of the higher bucks was worth a better look.

I got within 400 yards and watched as the two smaller bucks fed and played around. The bigger buck was still bedded in thick junipers that I could not see. I decided to move in another 30 yards and got setup for a shot. The other bucks bedded down so I figured I had an hour or two until they got up and stretched and fed. I lied “down” more like lying “up”, in that steep country, and took a nap every once in a while glassing the area making sure they had not gotten up. I woke up at 3:00 pm and in my glasses where the larger buck and the smaller buck getting into a little shoving match. After looking at him for quite sometime I decided it was the same buck I had shot at the last day of August, but he was quite smaller than I remember. Either it was a same buck and I had over estimated him in the velvet, or a different deer with very similar character. Anyway I didn’t get pictures in August so I’ll never know for sure.

Since I decided he was a deer I wanted and unable to hold out being excited that it could be the same buck, (I really think it is) I made a 350-375 yard shot and this beautiful buck was mine. A long and difficult pack out and lots of Ibuprofen I arrived with my first buck shot in Dental School and packed with my new Eberlstock backpack.

Thanks so much to my wife for being patient with me and the time I spend in the woods. I love her so much and am extremely lucky to have a wife that realizes what it means to me. I told her once to tell me if there was any time she really wanted me to stay home and I would because she never asks me too or even hints that I should and I know if she did it would be very important that I stay home. She replied. I don’t want to be that kind of a wife. I love her. I’ve shot a half a dozen other bucks and have had a lot of great hunts but for some reason this one will be etched forever in my mind. 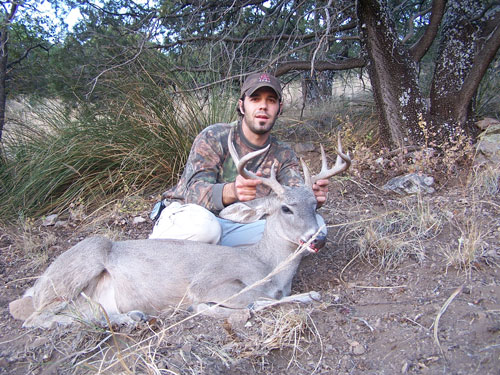