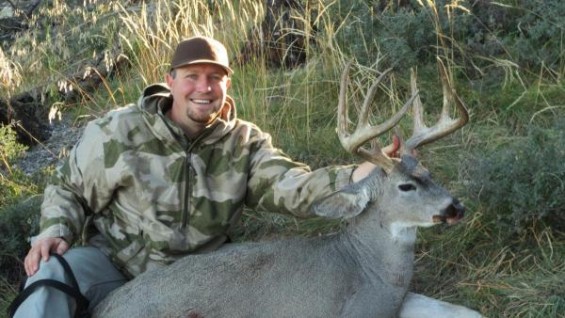 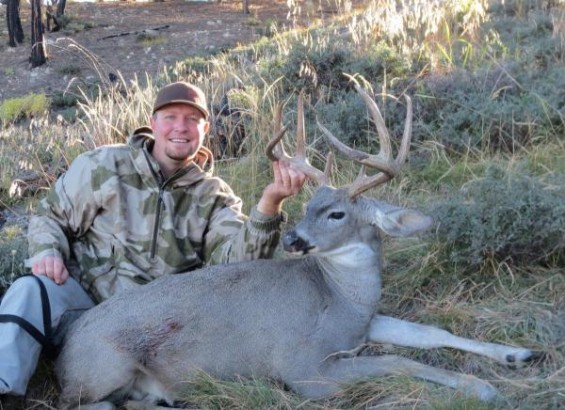 This adventure started this spring.  My father had found a spot that had good numbers of bucks including one that caught my interest.  He watched the buck all spring until they dropped their antlers.  We spent hours talking strategy at what would be the best way to hunt this particular piece of country.  We were always glassing from below looking up, so one day I loaded up my wife Jody and we made a killer hike, pretty sure we almost died, to get above the country and see what some of the upper vantage points looked like.  We left the truck, with plans to hike the big ridge end to end and have my father pick us up at the opposite end.  Our leisure hike turned into about 12 or 13 miles when it was all said and done!  I had carried a few motion cameras with me that day and I placed a few of them in some awesome looking saddles.  My excitement was high, of course that was until we finally made it to the meeting point with my father.  I was not sure if I would ever retrieve those cameras! HAHAHA  Two are still out as I type.

After my wounds heeled I could not take it, and Jody, myself, and my friend Jason made the hike to do some glassing and check the first two cameras.  We stopped and glassed prime time for an hour and actually turned up three really nice bucks!  I was excited and had some high hopes for the cameras.  The first camera was a serious let down.  It filled the card in three days!  DANG GRASS. We proceeded on and finally made it to location number two.  The camera was dead as well so I figured I did not have much on there, man was I WRONG.  I was flipping through pictures when this buck appeared dead center of the picture.  Instantly I knew, I had finally found the buck I was looking for.  He was a true monster.  I was shaking so bad I had to have Jody hold the camera so I could look at the picture!!!  The next month was filled with lots of boot miles.  Glass, glass, glass.  HIKE HIKE HIKE.  I spent every free moment I had looking for this deer.  Time seemed to fly by.  Before I knew it, Archery season was half way ever.  I really had no intention of trying to harvest this deer with my bow.  I am not a huge fan of fuzzy antlers, and I new this buck was going to be one that I wanted to let get to his full potential.  One day while I was scouting I actually ran into another guy who was obviously hunting, about ten minutes before I ran into him I had found a big salt lick that was getting hammered.  When I found this spot I was thinking, “man this has to be one crazy individual because it about kills me to come in here.” He had his bow in tow and I had this sick feeling by the look on his face, and I am sure I had the same look, that HE KNEW about this particular buck.  We exchanged kind words and pretty much BS-ed each other that we had not seen anything good in here blah blah blah.  My whole attitude changed instantly.  Now someone else had found the same deer.  I did not have him all to myself like I had originally thought.