Devon Hoss gets another nice buck!

I was drawn this year (2006) and went with my son the day after Christmas; work prevented me from going earlier. It was warm that day and we didn’t see and bucks the first night or the next morning. A few small buck and does that day. The second night the wind blew like crazy and it rained. Sometime during the night it turned to snow we woke up to wet snow, low visibility and more wind. We sat out that day and waited for the weather to clear. The next morning conditions seemed great, snow covering the ground, partly cloudy and 30 deg. We thought the deer would be moving a lot after laying low the day before. But we were not seeing any deer. I sat for 3 hrs and glassed with my tripod mounted 20×60 bino’s. Finally at 10:00 I saw my first deer a couple of does that had been bedded under some oaks that were over a mile away. During the next 30 minutes I counted 8 does all getting up from beds under the oaks. The 9th deer was a buck that was way out there and seamed to have a fairly tall rack but that was all I could make out. I tried to get my son to see it though the binos but he was unable. After I got good land marks we moved forward to the next ridge 300 yards closer I set up the bino’s and told my son to stay under the Cedar tree and keep looking in the bino’s and he would be able to see the buck that was now bedded in some grass below an oak. I crossed three more ridges and walked up on a small group of javelina at about 20 yards. I waited until they feed in a direction away from the deer so when I moved they would run the opposite way. After I got to the top of the last ridge I found him bedded and ranged him at 230 yards but he was bedded behind a rock and all I could see was his head and a few inches of his neck. I backed off and climbed higher to try and get a better angle. The snow was making a lot of noise as I worked up and when I peaked over the last rock he was standing up and looking in my direction. I had a rock a few yards in front of me and quickly got a rest on it and shot him. When I got to the buck I called my son, he said he had seen the deer drop and then a few seconds later heard the shot, and he was freezing from sitting in the snow in the shade. I GPS’ed the distance from where I had original spotted the buck 1.4 miles! I told my son to have a snack an wait in the sun while I dragged the deer to him. I was glad he was there to help by taking my rifle as well as carrying the tri pod and huge binos when I got back to where he was as it was still a long ways from the truck. It was not near the rack of my first Coues two years earlier but to me hunting Coues is all about sitting, glassing, and making a good stalk and shot. To have the snow and my son with me made it even more memorable. To top it all of I was able to pack up that night after a long drag out to the truck, about 3 miles, and leave early the next day to make it home for a neighbors wedding. Casey was 9 years old when we moved in to our house and was now marrying one of the youth leaders at our church it was great to be able to see that! 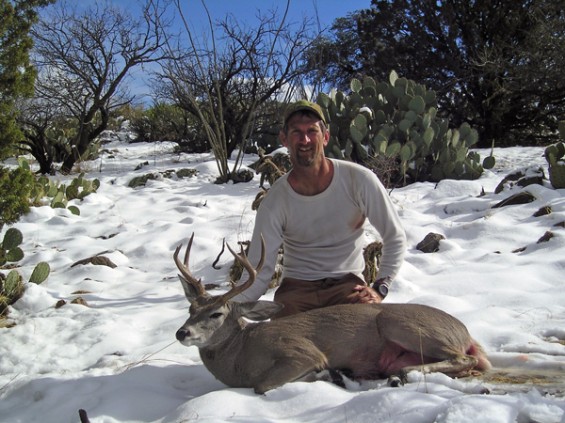 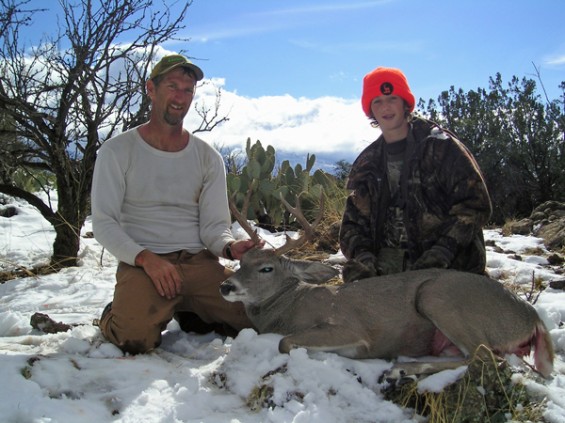