I shot this buck around 1:00 p.m. during the Dec 2003 season in Unit 21. I spotted him first thing in the morning with another buck. I could tell he was a nice 3pt, approx. 95″ but he wouldn’t turn his head much to let me see all of him as he was laying in some grass out in the wide open. He got up after about an hour and started feeding around, that’s when I saw his drop point on the right antler. That’s also when I told my Dad that this buck was in trouble. I told myself prior to the hunt that I wasn’t going to shoot a buck unless it was well over 100″ or had some sort of trash on his antlers. Since this buck had a drop tine and I’d never seen a live buck with one before I made up my mind real quick. I stalked the buck to within 115 yards and could see him walking through the bushes but he offered no good shot so I waited. I guess he decided that the tree he went behind was a good place to bed because he didn’t come out I sat in the wide open sun for two hours, right behind the scope, waiting for him to come out. I stayed ready just in case the buck decided to have a mid-day snack. Well he eventually caught wind of me and decided to make a getaway but I was already on him. When my bullet hit him he flipped forward on his shoulder and head into a small mesquite bush and shortly after I shot him for the second and last time. When I got down to him the first thing I looked for was the drop tine and it was gone! He had broken it off in the fall. I noticed then however that he had one on the other side too, but it had busted off prior to our encounter. I looked for 45 minutes for the broken tine but never could come up with it. Well maybe I’ll have it replaced I’m not sure right now. I do have almost 20 minutes of video of him so maybe I can get it fixed pretty close to the original length. I’m glad my Dad was with me as he’s always been my best hunting buddy and friend. 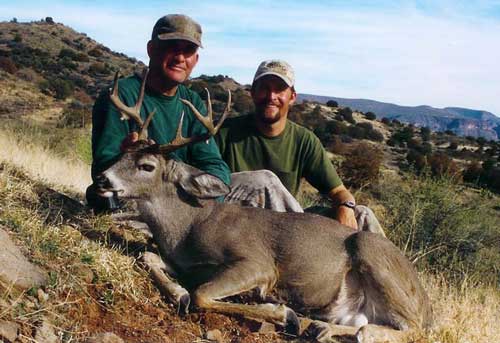 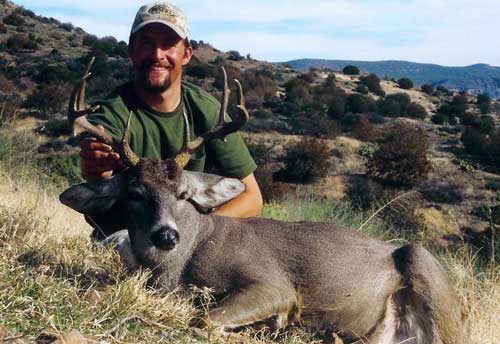