May 11, 2012 by CouesWhitetail in Hunt Stories with 0 Comments

It all started when I was drawn for elk and deer for the 2001 season. Getting drawn for one is a rare but both, I couldn’t believe it. At home, I practiced raising my rifle to my shoulder, focusing through the scope, and removing the safety. I scouted the area several times prior to the December operner, as it was my first hunt in the area. My thanks go out to Del for telling me to hunt the mountain range west of SR 87 not east. The area is mountainous with a sea of Manzanita bushes that choke the mountain slopes. As I drove the roads for the first time I was intimated by the terrain. “How in the world will I be able to see such a small animal in all these bushes” I asked myself. That question was answered on the next scouting trip as I glassed the south slopes. The does I saw walking in and out of bushes were like fleas in a dog’s fir. Ultimately, I found a great looking spot (Plan A) with two tall mountains melting into each other creating the notorious escape routes (draws/canyons) that whitetail deer frequent when they sense danger. I was not able to find a buck that I wanted to hunt but I was hopeful that this spot would yield my Christmas present.

The first morning found me hunting alone and watching some does that eventually dissolved in the Manzanita bushes from only fifty yards or so. I drove to another draw further down the road, thinking I would come back to the Plan A spot for the evening hunt and find a curious buck chasing the does. As I walked down the draw I slipped and fell twice on the snow covered ground. I was mad that I dropped my rifle in the snow. My blood boiled as the snow in scope lenses only melted and smeared when I tried to clean it. I finally stopped where I could see about 75 yard in any direction. At 10:00 AM it had warmed up enough for an up thermal and a highway of deer tracks in the snow told me that this was a good ambush point. As luck would have it, I heard some noises and I took the Ruger 7mm mag off my should just in case. Just then I saw three deer walking in a single file line. The last one was a small buck that had his nose to the ground behind the does. He was probably a two year old buck, so I passed on him hoping for something a lot bigger. That evening I didn’t see anything in the Plan A spot so I headed home for hot food and a warm bed.

Saturday morning I was up at 4:00 AM and out the door at 5:00 AM (I live about an hour and a half away) and the snowstorm from the previous night brought snow as low as Sunflower. When I arrived at my hunting destination, there was snow on the north and south slopes with two sets of fresh tracks crossing the draw. I walked and glassed as I went but didn’t see a single thing all morning. At 11:00 AM or so, I decided to make my way back to the truck. As I came to the tracks again, I decided to follow them as far as I could. It wasn’t very far because of the dense vegetation, but just then a doe stood up about 40 yards. A second later a big buck erupts from the ground like a volcano as he leaps over bushes. I could see that the right side of the antlers, “He’s a 4 point” I thought in disbelief. I could only see his head and crown through the bushes until he came to a big drainage that led to the draw where he disappeared. I left the area convinced, that was the buck I was going to take if I got another chance.

The following Saturday (10-22-01) I brought my friend (she doesn’t hunt but she’s OK anyway) with me and we glassed a doe all morning hoping that a love struck buck would mistakenly declare his intentions to her. That wasn’t the case so we headed back to the truck for some lunch. On the way to the truck I decided to show her where I jumped the big buck the previous week. More savvy this time, I clinched my Ruger in my hands like a prize fighter in heavy weight boxing match as we entered the hunting arena where I was defeated exactly one week before. I pointed to my boot prints in the patches of the snow and fresh deer tracks in the soft earth. In the distance, we could hear some rustling of bushes that I dismissed as birds foraging. I refocused my interest again when the rustling turned to branches breaking. At close range, the buck jumped over a bush and I saw the same right side of the rack. “It’s him, it’s the same buck” I though I said aloud. I shouldered my rifle, located the movement in the brush through the scope and instantly removed the safety. In a fortunate twist of fate, the big buck disappeared in the same drainage in the side of the mountain, but our scent forced him up. Thanks in no small part to my friend, I saw the buck broadside at 130 yards uphill. I raised my Ruger 7mm mag again with a variable scope set at 6 power and I could only decipher the decent main beam and spread. I pulled the safety button again and I squeezed the trigger but nothing happened. I was already in fire mode from first sighting (seconds before). The training I did in the preseason kicked in and worked against me momentarily. Buck fever is a funny thing, Huh. With a quick flick of the thumb to the safety, I squeezed off the 150-grain Dove Tail Federal bullet that found its mark. He ran ten-yards and expired humanely. Two hours, some cuts, several tumbles over Manzanita bushes, and some bruises later I raised my hand in victory. Christmas came a couple days early for me this year in the form of a 3 x 4 Whitetail deer with a kicker on the brow tine. 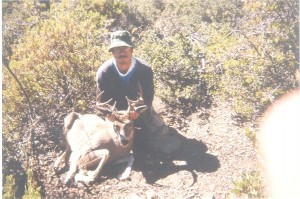