Home / Hunt Stories / Everything that could have gone wrong didn’t…

Everything that could have gone wrong didn’t…

I started my hunt off all wrong. I didn’t book a place to stay so I had to spend my scouting evening before opener looking for a hotel. Yeah, I should camp, but I’m getting too old and soft I guess. I didn’t sight in my rifle properly until the day before, but at least I got it done.

I drew 36A, which is an area I was somewhat familiar with, although not from hunting it. I got up at 4:15AM on opener but I was an hour away from my desired location and had to stop for gas to boot. So the short of it is I got to my destination a lot later than I had wanted, but at least it was still early enough I kept telling myself.

As I’m locking up the truck and shouldering my gear a very nice young lady from AZ Game & Fish pulls up and asks to see my tag and photo ID. She writes down my name, and I see I am about #8 on the list. I had passed quite a few trucks and jeeps on the road out, lots of smiling faced hunters anticipating a good hunt. So she tells me this isn’t a bad area, and that most folks make the mistake of leaving too soon if they don’t see something. “Be persistent” she says, and I make a mental note to stick it out.

So I head off into the hills, covered with Oak and Juniper and lots of grassy areas between. It seems like good deer country to me. I hike about a mile off the road, maybe a little more, and pick a spot half way down a slope that gives me a view of the facing slope, which is a slight bowl shape offering me a pretty wide expanse for glassing. I had to move once to find a space between the trees on my side that offered the best view.

This is my first Coues hunt, and I’ve heard “glass your behind off” more than once, so that is what I intend to do.

I got settled in and then start to diligently glassing the far hill side and within 20 minutes a spike buck steps out into my field of view. This is the first deer I’ve ever glassed, so I’m pretty please with myself. A doe and a fawn step out with him in the next minute. He’s about 220 yards off and I’m somewhat tempted. I should say it’s been 15 years since I’ve hunted and I’m anxious to have some success and bring home some meat to help offset the small fortune I’ve invested in gear this last year. I reach for my rifle and find that I haven’t really thought this part out. I’m precariously intertwined with my binocular tripod, and the rifle is too far away and facing the wrong direction. By the time I’ve got hold of it and brought it to bear on this spike he’s a good 250 yards and moving away into some dead branches. I’m doubting I can get a shot and debating with myself when a rifle cracks in the next canyon over and he’s quickly 300 yards out and moving faster. I give up on him and am just glad to have seen him anyways.

I continue glassing as the sun is beginning to climb into the sky. Every 15 minutes or so I hear the distant, or not too distant crack of a rifle and think someone is going home with meat. It gives me some confidence to hear this sound as it surely means there are quite a few bucks in the area. I glass that hillside diligently, as I should, for another 2 hours or better but I’m not seeing anything at all now. The sun is getting much higher and it’s nearing 10AM. It’s finally starting to warm up a bit, and I’m thankful for that as I wisely decided to fore-go the jacket and heavy boots. I’m beginning to feel like it’s getting late so I start to get a lot more casual about my glassing. I reach for some snacks and a drink, and then the words of the Game & Fish lady come back to me, “Be persistent.” So I get back to my binoculars and decide to give that hill a thorough going over. I’m using Nikon 8.5 x 50’s and I’m really happy with them. I start to swing the glass from the top left corner of the slope, which is where my field of vision begins on that hill, and also the direction the 3 deer I’d seen early came from. I swing about 50 yards and bam! There is a nice buck standing broad side to me, and he’s staring very hard right at my glass! Holy smokes, how did he get there without me seeing him? I hold very still as I’m sitting in the middle of a patch of grass with absolutely no cover. I’m wearing pretty good camo, and the wind is hitting me in the face, so scent wasn’t going to be an issue. After locking eyes with me for a good 3 or 4 minutes he resumed his browsing and slow ascent up the slope. I reach for my rifle, which was now much closer, and facing the right direction, and leveled it on top of my binoculars tripod, but to no avail. He’d gone into the dead branches, and I could barely make him out. I watched in agony as he slowly worked his way up to the top, and finally he disappeared into some trees at the crest. I mentally kicked myself for getting so lax and blowing a perfect broadside shot on what I call a nice buck. It was difficult to make out, but he was at least a nice fork, and it looked like he had another point or two in the mix.

I was sitting there debating trying to put a stalk on him, knowing that climbing the 100 yards up that hillside through brush and grass was not a very likely success story, when I saw a doe about 50 feet to the left of where I had first spotted him broad side. She was browsing on shrubs and oak leaves and not looking like she was going anywhere, so I decided to sit tight. If I tried to stalk him she would most likely bust me. As I watched, a second doe came out from behind a tree, and then a fawn. Wow, this is great I’m thinking to myself. Surely he’s part of this group and he’ll come back out into that open grass area and give me another broad side opportunity. I am an optimist by the way.

I should have been looking all over that hill side just in case any other bucks might come wandering along, but I was intent on “my” buck and I didn’t cover more than a 40 yard area where the does were and where I’d last seen that buck. I watched those three deer for another half hour, just about ready to give up hope that he’d come back, when suddenly there he was, not far from where I’d first spotted him, and sure enough he was broad side to me again, but this time he wasn’t looking at me.

I slowly reached for my rifle and scooted back just a smidge on the hillside I was sitting on, raising me up a little bit so I could get a good rest on my tripod. I found him in my view finder, my heart beating at a pretty good clip and was just drawing down on him when my rifle went boom!

This was a new rifle for me, a Sako 308, with a very light trigger. I didn’t have time to think about what happened, I saw that he hadn’t move, except to look at me again, so I jacked another round and drew down on him again, being more careful with my trigger finger. I placed the cross hairs on his rib cage, and squeezed off another round. I just saw him for a second, and he was gone, but I felt much more comfortable with the second shot and was pretty sure that he was hit.

I didn’t move and spent the next 20 minutes watching the does, who continued to feed after settling down. Then something odd happened. One of the does started bobbing her head and looking at something in the grass. She went up to it and then all three deer bolted and were gone. At that point I was pretty sure he was down, so I started up the slope. After 15 minutes of searching around I found him about 20 feet from where he was shot. The round had gone right where I had hoped it would and he was done for. He was a three pointer, not counting the eye guards. A very small three point buck I guess, but he seemed very respectable to my rookie eyes.

After a few cell phone photos I field dressed him and started the long drag back to the truck. Coues area small deer, but this one wasn’t too light, and oddly he seemed to gain about 50 lbs before I got him back to the road. I had been very generous in estimating how far I could drag a deer through this country, and I paid for that, but I made it back alive.

It was a great hunt and I look forward to drawing another tag in this area again. 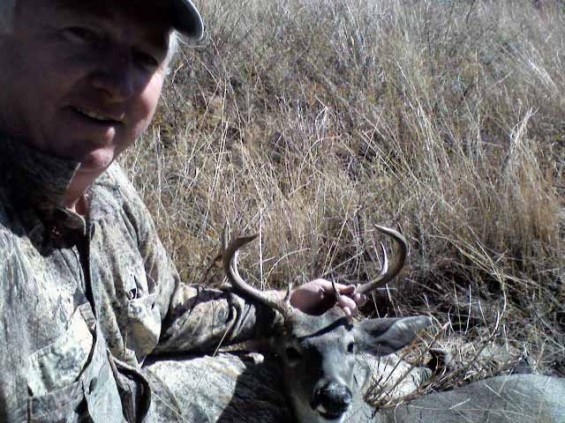