I finally decided it was time to get up the nerve and post a story for once. I graciously had my friend Tim post the original story of this Coues buck in November of 2008. I didn’t know much about the site, nor did I have much time to spend on it. Anyway, on with the story. Tim first introduced me to this buck in 2007. He had located this buck a few years before, but the buck always managed to disappear before the opening of the first rifle season in October. We each tried several times to stalk this buck with a bow, but he loved hanging out and bedding in wide open country that had burned years before and the area didn’t lend itself to doing much stalking. In 2008 I decided to put in once again for the early rifle hunt, and prayed we would find him once more; and we did. I luckily drew the tag again, and immediately started trying to locate him, as well as a non-typical buck we had seen the year before. We never did find the non typical buck, but we did find ‘Ol Wide Boy.

Tim managed to first locate the wide buck again in early August. From that point on, either Tim, or my good buddies Cody and Erin and I were out keeping tabs on him until the beginning of the season. I was fortunate enough to get good photos of the buck from over a mile away through my spotting scope in both velvet, and then hard-horned before the start of the hunt. You can see copies of these photos attached at the end of the article. As opening day approached, I could not stand it any longer. I needed to be out there with that buck, and watching his every move. The day before the opener I was by myself, in one of the same spots I had glassed him up from several times. To my surprise, while sitting in the hot sun with no cover for an entire day, I did not find him. I was starting to get nervous. Had he disappeared once again before opening day?

My plan for the opening morning was to have Cody, Erin, and Tim all 3 positioned at different vantage points glassing for me. Unfortunately, Cody had to work, and Erin had to leave town for a family emergency. Now I was getting really nervous. I had made a call to 2 other friends, Jay and Darr. I have helped them both on several hunts in the past, and I begged them for their assistance. I knew in order to pin this mature buck down, we were going to have to triangulate him to even have a shot. The country was just too vast to cover with only 2 guys. They both excitedly offered to come and help, but could not be there until opening morning. I wanted to be in position long before first light, and we had several miles of hiking to cover to be within vicinity of the deer.

As opening morning approached, we were all in position before sunrise. As we glanced back up the mountain before light, we saw two other head lamps coming our way. The year before I had 2 hunters walk right up on the non-typical buck in the dark, even though I had asked them to hike around or wait for first light. Needless to say they spooked him and we never found that buck again. As luck would have it, it was the same exact 2 hunters. After some choice words were exchanged over the radios, Jay cut them off and warned them that I was on top of another good buck again, and that if they hiked in on me again, I wasn’t going to be so kind about this time. In the beginning they did as they promised and hiked out around my position. But, they ended up climbing right up on top of the bluffs overlooking where I had last seen my wide buck. I could not believe this was happening yet again. After about 20 minutes they finally continued on further East to a point that none of us could see them from our positions. After another 30 minutes there was still no sign of the wide buck, and we heard a shot. I sat continuing to glass for another 10 minutes, but I just couldn’t take it. I had to see if they had shot this deer. I moved as quickly as I could to get over and on top of the bluffs, but still being cautious not to spook the buck if he was still alive. From the top of the bluffs I glassed off to the East and could see that they buck they shot was not the wide one. Thank God! Since I was now on top of the bluffs I decided to move over to the South edge of them and see if I could glass down to locate my buck bedded up out of site. As I worked my way through the top I heard a sound over the radio; “stop moving, the buck’s up and running down the finger”! Ahhhhhhhh! Now I was really getting frustrated.

My whole plan was unraveling quickly. Luckily Jay and Darr were able to keep an eye on the buck for most of the way, and Darr watched him bed down probably 1500 yards further down the mountain. We made the decision for me to get out out the bluffs, and come back across to the other side of the canyon across from the buck. After a few hours of stalking down the opposing finger across from the buck, we were finally able to find a suitable area to shoot from. After a lot of frustration I was able to locate the buck bedded in a dark, shadowy, and very thick bunch of brush. We estimated the yardage across the canyon to the buck at over 450 yards. I did not seem to have a clean shot, so I kept waiting to see what he would do. In a moment of clarity my eyes came unfogged, probably because my heart rate had finally subsided, and I could see an opening of the brush exposing his front shoulder closest to me. I poised myself, with a lot of help from Jay, and prepared to take the shot. Of course the buck finally decided he was safe and stood up. My heart began to race again, and my lungs felt empty. I got myself repositioned quickly and prepared to take a quick shot before the buck moved out of site. The shot was not only across canyon, but was also down hill from our position so I knew I had to adjust. I let the first shot go, and “wham” I could hear the crack that you love to hear as a hunter. I heard Jay yell, “he’s down”.

I couldn’t believe it. We finally got him. One shot, right through both lungs, and my trusty .257 Weatherby had done its job. When we got across the canyon to the buck, I was astonished. He was a little smaller than I had estimated him, but man was he wide. He is the second widest Coues Deer I have ever seen. In previous years all of this deer’s tines were as long as his eye guards. We discovered that he was a very old buck, and didn’t have a tooth left in his head. Although he was on the decline, it was an incredible feeling to finally harvest a buck that I had targeted for so long. You will see in the photo of the final mount the photos I have of the buck in velvet, then hard-horned, and then finally down. It was incredible to be so blessed to have all of the photos to go with the trophy. I want to give special thanks to Cody Nelson, Erin Bittner, Tim Coonen, Jay Scott, and Darr Colbrun for all of their help and assistance in achieving my goal. I couldn’t have done it without their help. And special thanks to Clay Goldman out of Payson for the beautiful work on the mount. I couldn’t be more pleased. 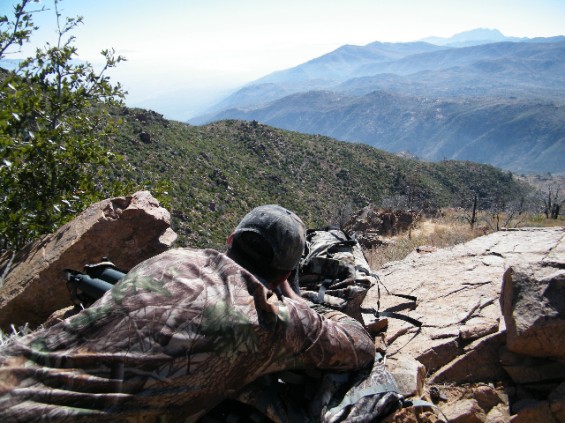 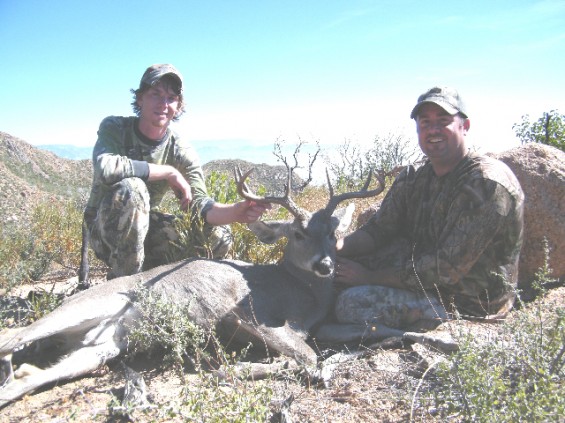 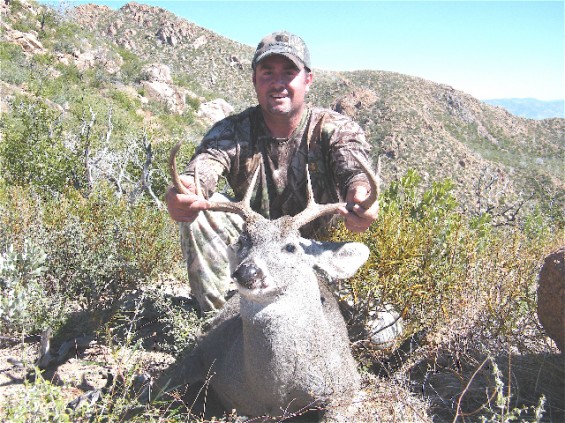 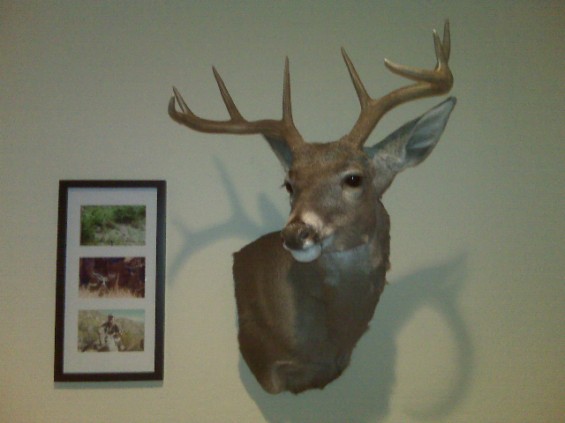