May 10, 2012 by CouesWhitetail in Biology with 0 Comments 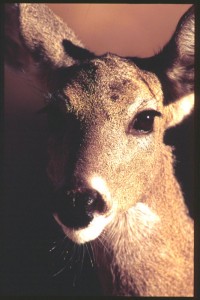 Photo by Joe and Marisa Cerreta

If someone should conduct a beauty contest among the game animals of the Southwest, I have no doubt the Arizona whitetail would win hands down. A big buck mule deer, with its massive antlers and blocky build is a magnificent sight. Likewise a great desert ram or lordly bull elk. But the Arizona whitetail is an exquisitely lovely thing. ~Jack O’Connor

You can see in the photos below the size of a Coues deer buck relative to the size of a man. Both these are large, mature bucks. The one on the left was exceptionally large bodied. It probably weighed 115-120 lbs. whole. At the meat locker it weighed 79 lbs. and it had no head, legs, internal organs or skin on it. Photos by A. Moors and M. Hanson. 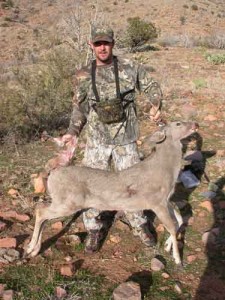 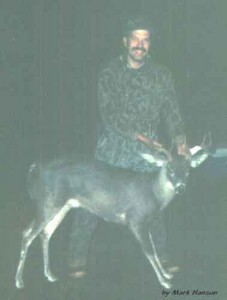 The Coues deer varies in color from a grayish coat in winter to a more reddish-brown color in the summer. Fawns are born with numerous white spots on their coat. Those spots generally disappear after about 2 months. Coues deer have the classic white circles around its muzzle and eyes seen on other subspecies of whitetail. However, Coues tend not to have such a pronounced white throat patch as do whitetail in the East and to the North. The tail of the Coues deer is generally brown with a border of white on the topside and completely white on the underside. This is in contrast to a mule deer which has white on the topside of the tail. Tail color can vary geographically. The topside of a Coues tail can be grayish, reddish brown, or black (see photos below). 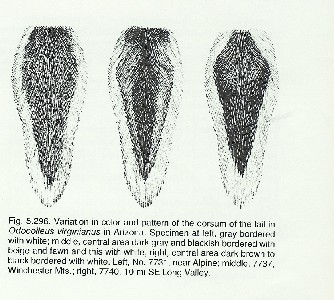 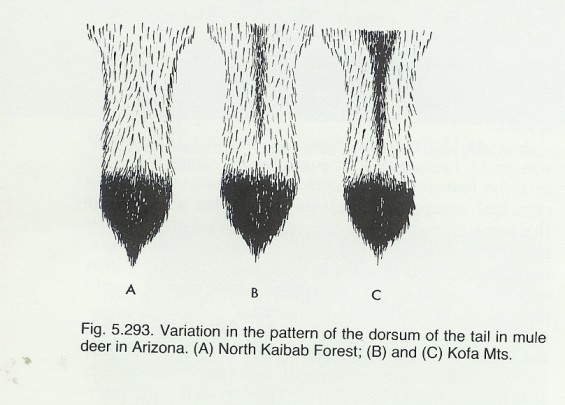 The illustrations above show the tail pattern variation in Coues deer and mule deer in Arizona. Graphics provided with permission from Dr. Donald Hoffmeister and were taken from his book “Mammals of Arizona” published by University of Arizona Press. Click on pictures to see larger version. Note the narrow, rope-like white tail of the mule deer in comparison to the wide, colored tail of the Coues.

The nice 3 point buck in the photo to the right has a two-toned colored tail. It is reddish-brown on the upper half of the tail and black on the lower half. Photo taken Dec. 22, 2002 by A. Moors in the Roosevelt Lake area in Arizona. Click on image to see larger version.

How do you tell a Coues Deer from a Mule Deer?

In most of the Coues whitetail range, the other common species of deer is the mule deer (Odocoileus hemionus). Although there are some similarities in looks between these two species, it is generally easy to distinguish between them.

The tail is the easiest way to distinguish these two deer species (see graphic below). Coues deer also have a much wider tail that is white underneath, but not ontop. The tail of the mule deer is much skinnier, very rope-like, and is white with a black tip. When Coues deer are excited, as when fleeing a person or predator, they will raise their tail. This prominently displays the white under the tail and is commonly referred to as “flagging”. The mule deer will not raise its tail in that manner.
In addition to the tail flagging, you can also tell these deer apart by other differences in their behavior. White-tailed deer generally live in small groups of 2-5, not larger herds like mule deer. White-tailed deer and mule deer have different predator avoidance strategies. When mule deer are fleeing a predator they will use a unique gait called stotting. Stotting is the gait where they bounce stiff-legged on all four legs at the same time. Whitetails will not do this. They will leap or trot away from danger.
Coues deer have a much smaller metatarsal gland found on the outside of the hind leg (not the tarsal gland on the inside of the leg –see graphic below). The gland is covered by white hairs in the Coues, but by buffy or brown hairs in the mule deer.

This figure is provided courtesy of Dr. Donald Hoffmeister and is taken with permission from his excellent book “Mammals of Arizona” published by the University of Arizona Press in 1986. It shows the differences in metatarsal gland (see arrows) and tail of the white-tailed deer compared to the mule deer.

Coues deer have the classic white “halos” around their eyes and muzzle. Mule deer will have quite a bit more white on their faces, not just encircling the eyes and nose. Mule deer also have more black coloration on their foreheads. These facial differences are very useful to help identify deer that are facing you and you can’t see their tails.
This photo shows the white halos on a Coues Whitetail’s face. Sorry the photo isn’t really in great focus, but you can see the white rings fairly well. Photo by A. Moors.

Coues whitetail, like other whitetail, have antlers that have the tines coming directly off the main bean. In contrast, a mule deer has branching of the antlers such that some tines come off other tines in a regular forked pattern. A young Coues that has just two points (a forkhorn) on its antlers will look very much like it has the branching pattern of a mule deer. Keep that in mind when using this feature to identify deer.

Mule Deer Skull Coues Deer Skull
The photos above show the differences in antler branching patterns of Mule Deer and Coues Deer. Note the branching of the mule deer antlers versus the tines coming off the main beam on the Coues. The mule deer photo is courtesy of Dr. Donald Hoffmeister, from his book “Mammals of Arizona”. The Coues deer photo was taken by Amanda Moors.

Coues white-tailed deer (Odocoileus virginianus couesi) is one of about 35 subspecies of white-tailed deer. The Coues deer is a member of the order of animals called Artiodactyla, which is a group of hoofed mammals that use their third and fourth toe as their main support when walking. This group is also referred to as even-toed ungulates. Elk, javelina, antelope, bison, and bighorn sheep are also members of this order. Deer belong to the family Cervidae, whose members are characterized by, among other things, having antlers that are shed annually and a four chambered stomach. White-tailed deer are members of the genus Odocoileus and the species name virginianus. The subspecies of Coues whitetail is denoted by having couesi added to the genus and species names.

In terms of evolution, the white-tailed deer (Odocoileus virginianus) is the oldest deer species, whereas the mule deer (Odocoileus hemionus) is the youngest deer species. The white-tailed deer shows up in the fossil record for North America over 3 million years ago. The mule deer seems to be a species that only developed after the massive mega-faunal extinctions about 12,500 to 7,000 years ago. For more information about the evolution of deer, I highly recommend a book by Dr. Valerius Geist called “Deer of the World: Their Evolution, Behavior, and Ecology”.

Roy Lopez with Northern Arizona University is currently studying the genetics of Coues whitetail in Arizona. I hope to post his preliminary results as soon as they are available. DNA analysis can tells us, among other things, if deer in the Chiricahuas ever travel to the Galiuros or other mountain ranges. Or if those deer are reproductively isolated over the long term from the rest of the “sky islands” in the southeastern part of AZ. If you have antlers or tissue from deer harvested in Arizona game management units 21, 22, 23, 24a, 24b, 27/28 and/or 30b, please email Roy Lopez and find out how to get the sample to him. The more samples he gets, the more reliable the data. If you are a shed hunter and remember where you picked up those sheds, give Roy a shout and see if you can help him out. He can get a sample from the bone under the base of the antler.