This hunt started out of frustration, after hunting Mexico for 8 straight years and never breaking the 120” mark (112” personal best), and all of the state land hunts I have endured, I decided it was time for a change. I was venting my frustrations to my friend and taxidermist Mike Vacarro, and he mentioned that he had killed a 120” plus Coues on the reservation before, so heeding his advice I decided to give it try. I asked my friend Mark Boulanger (who by my standards is the sickest/best Coues hunter I have ever seen) to join me and he accepted. The months we spent waiting for the season to open gave me the opportunity to put together a new lightweight 270 WBY mag., just the rifle for this kind of a grueling hunt to come. After many trips to the range and some custom ammo, I had the 270 tack driving out to750 yards with a 130 gr. AccuBond, and weighing in around 8 lbs, it was ready.

As the season approached, I began to realize that I only had limited knowledge of the San Carlos terrain via turkey hunting, so I would need a lot more input from friends and tribal guides. I contacted Monster and scheduled opening day with him, this worked out good for me because Mark was unable to make opening day due to work obligations. But unfortunately on Christmas evening Monster called and cancelled due to his truck breaking down, so now I would be solo the first day. Thankfully Monster was kind enough to give me places to start looking and advised on where we could set up camp.

Opening day was uneventful, glassed 6 bucks with the largest 85”. Mark arrived on day 2 and we set up camp and began to hunt area’s that friends recommended for the next 4 days, turning no shooters, we headed back home to recharge and spend New Years eve with our families. While at home, I received a call from Monster telling me to contact a tribal guide named Dewey. When I spoke to Dewey, he told me he had a hunter that missed a teen buck two days ago and that we should go after it, so I agreed to meet Dewey the next morning. The next morning came and it was very cold (9 degrees), as we hiked into the area, the sun started to reveal a beautiful Coues habitat and I became very excited about the prospects of killing a teen buck. By 1:00 pm and 6 miles later, the biggest buck we could find was 90”,and that’s not what I was looking for, so it was time to move on to another spot Dewey had in mind, and by 5:30 we never turned a shooter, so it was time to call it a day.

Mark and I ground pounded the next two days like every other day, leaving camp well before light and returning well after sunset, only taking time to cook a little dinner and have a few cocktails, then lights out at 8:30 (couple of old men!). During these 2 days Mark found a 105” buck in a different area that we would keep for a last day buck.

The big day…My buddy Ray D. came up for the day to lend a hand glassing, now there was 3. With words of encouragement from Dewey (3 days prior), I decided to go back into the first spot Dewey took me to. Only having been there once before in the dark, made it a little challenging to lead this group back into the correct spot. The 45 minute hike turned into a 90 minute trek with me swearing because at one point we were walking on the hillside we intended on glassing*!@%#. Regaining my composure, we settled on to a ridge with a perfect view and a shooting distance 250-450 yards and began glassing, each of us spread out about 70 yards apart with me in the middle. The morning was kind of slow with a few smaller type bucks moving around but very few does. This did not discourage me, in fact around 8:30 AM, I got this feeling that something was going to happen, so I removed the turret & scope covers from my rifle and racked a round. We continued glassing, and at 9:45 while scanning over a piece of real-estate I’d looked at 8 times before, I see a spike with his nose down heading towards a big dead tree, then HE stands up!, my mouth dropped because all I could see was horns! and I began calling for Mark to come quickly. looking to my right, I see Mark heading towards me in a complete panic!, thinking that he heard me calling him, he runs up to me with WILD look on his face and says “GET YOUR GUN!” and follow me, I said no!, I got a giant buck in my binos , he says no I got a giant buck over here, I say no, look at the buck in my binos, he does and says that’s the same buck follow me! We scrambled the 70 or so yards up the hill, and Mark was right, he definitely had a better vantage point to shoot from. Mark’s immediately back in his binos and says, I got him, but he’s chasing that spike around and moving very quickly in and out of the trees. I steady myself on a elevated rock and asked for yardage, Mark says shoot it for 300 yards, and he’s coming from the left to right hold on the next open spot in front of him, I found a opening between two dead tree branches about 2’ wide and hold on it, what seems like forever took all of 10 seconds for the deer to move through the opening, and I fired, WHAP!!…Unbeknownst to me the deer runs about 30 yards and beds down under a small oak tree, did I hit him?, Mark says not sure, but I got him under the small oak tree. As I go into melt-down thinking I’ve just missed the biggest Coues deer I’ve ever seen in my life!, Mark tells me that he’s wounded and just stood up, and to shoot into a small black open hole in the tree, boom!, Mark looks at me very calmly and says 130” buck down (later Mark unofficially scored it at 141)! As we walked up to the deer, I couldn’t look because I still was waiting for something to go wrong. Then the celebration began, we were all in amazement of how big this beautiful creature was! (I will skip the crying part) a lot of man hugs and photos, then back to camp with the bad boy in my lap the whole way, I felt like a proud father coming home from the hospital. 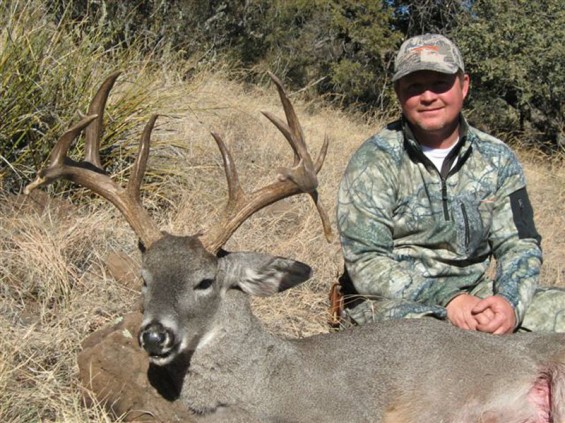 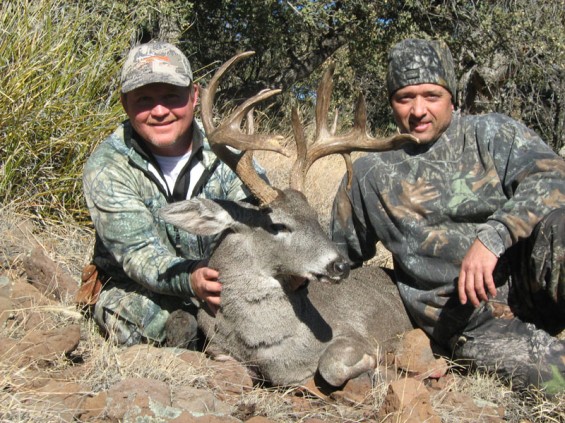 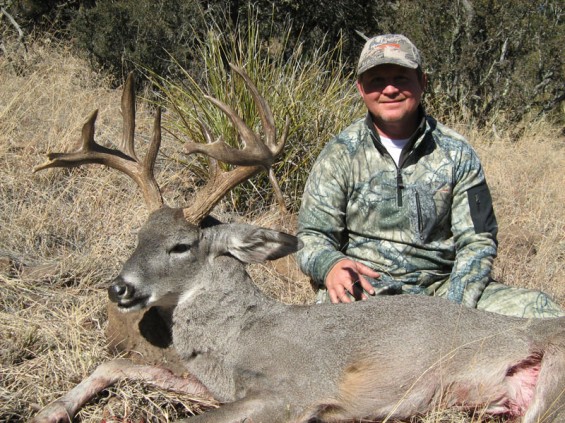 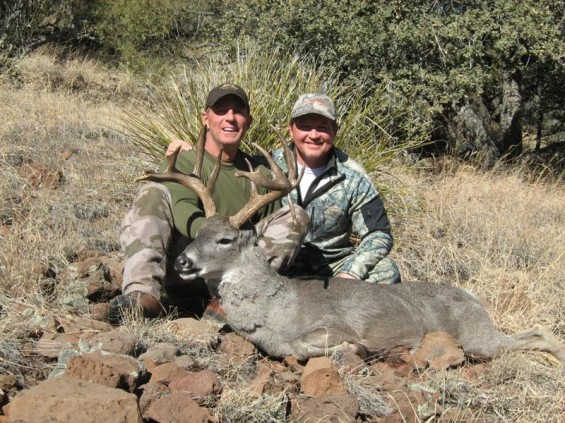 Next day I drove the head back to Phoenix for proper care, then back up the hill to help Mark find a shooter. We spent the next 3 days scouring the reservation for worthy buck. And finally on the last day we decided to kill the 105” buck we left for the last day. Mark made a great shot at 400 yards, I was very proud to have been apart of his hunt with him. The cool part is that I’m going to use his cape on my life size mount, so every time I look at it, it will remind me of our hunt together. 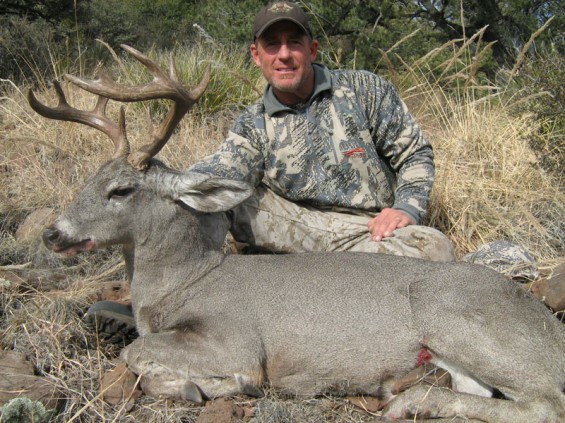 I would like to thank a few people for helping make my dream come true; Mark Boulanger, without him I would not even be writing this story, Dewey, the #1 guide and for his knowledge of the reservation, Monster, Ray Dorweiler, Mike Vacarro, Jackie McDermott my beautiful and supportive wife.