July 17, 2012 by CouesWhitetail in Hunt Stories, Rifle Gallery with 0 Comments 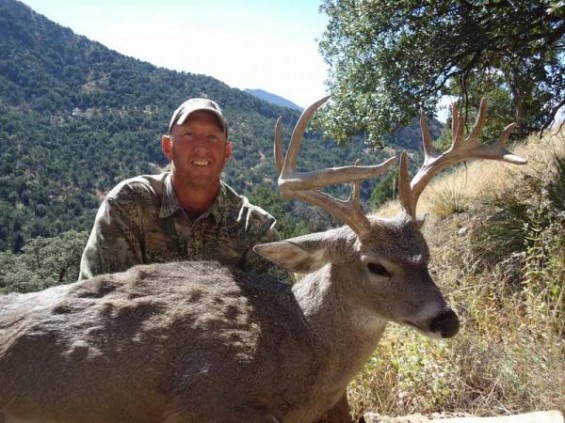 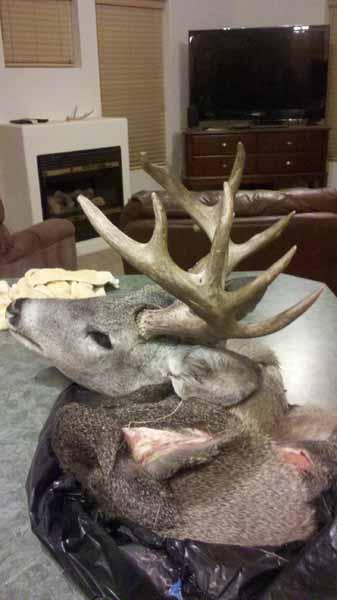 Greg Joels asked me to post this for him:

Our hunt started out in an area I grew up hunting muleys in. Now there isn’t a muley to be found but the coues are still there.  Thought being sentimental would bring us luck but it only brought lots of immigrants, border patrol, and wind.  We saw plenty of bucks but nothing to get real excited about.  It was good to get back in there and remember all the good times we had in those hills.  Larry was probably tired of hearing a story at every bend in the road.

We finally gave up on that area and pulled out the map.  We decided on a new spot a few hours away and packed up camp. we went for a small hike that evening and larry was pretty jazzed up about the place. Being an accomplished whitetail hunter he tells me “this is a place you will see a monster.” Following morning we took off hiking and it didn’t take long for us to realize we made a good move.  we had split up to glass and after an hour he comes up kinda (really) excited and said he had a shooter. He had been playing cat and mouse with the buck for an hour and lost him.  We never saw that buck again but found another good buck in the 90’s I just couldn’t pull a shot off on. The wind was horrible and was blowing me off the mountain.  I was so irritated and tired on day eight of the hunt I almost packed up and left.  Larry convinced me to suck it up and stay one more day. Glad I did.

Day 9:  veterans day.  we take off and push deeper into the area we had seen the bucks.  We set up the glass on a killer looking canyon and started to work.  I picked up some deer right away around a big dead cedar tree.  A few does fed around the tree and I saw a buck thru the tree.  It was hard to get the details on him I just knew he was big!  I told larry that I had a hundred incher and he shifted his glass over and told me to get on the rifle.  I set up in the prone and ranged the tree. 580.  It always seems difficult to get comfy when the moment of truth arrives.  Well I layed there for an hour and no buck. How did this guy give us the slip? I stood up behind the 15’s and started panning around. Then I saw a “small” buck and got back behind the ultra and racked a 210 berger.  A second later larry says” there he is.”  I just saw lots of horn, shifted the rifle, and definitely didn’t squeeze the trigger!  He ran about fifty yards and piled up.  I ask larry if he was a good one and he said ” well i have seen a few of those boogers and that’s boone and crockett.”

After a high five that turned into a hug larry set off to find my dream buck.   I continued to glass and after five minutes called him on the radio to tell him I had found two decent bucks on the same hillside that mine laid on.  He ended up shooting a 97″ buck an hour after mine was shot.  When he got to his he called me and asked “how big did yours look compared to this?”  I told him that he dwarfed it.  He came back and said” wow, this isn’t a bad buck.”

We met some first time deer hunters back at our starting spot one of whom was a disabled vet.  We told them where some bucks were and set their binos up on a tripod.  I ended up getting a picture message of tom and his first buck. How cool. He had shot it that morning I shot mine.  What a day.

Thank you to all our veterans and active military.    Left side was 57.  Right side was 49.  122 total.  Had a drop tine going on right side was damaged in velvet id guess.