At about 9:00 am, John spotted the buck, along with 2 smaller bucks and a few does. After moving closer for a better look, his partner and he decided it was a good buck (especially with only one more day left in the season!), but  couldn’t get a clear shot. They watched it bed down and waited another 2 hours or so for it to get up. Finally at around noon, the buck began to browse, but did not present a clean shot opportunity. At about 12:15, the buck walked into an opening at 430 yards. A loud “blaaaaat” got the buck to stop momentarily and John fired one shot from his Rem. 700 .25-06. Its a 4×4 (incl. eye guards) with an outside spread of 15 1/2″. Not much for tine length, so it won’t score very high, but it is a definite trophy in John’s book. It was a very big bodied buck, heavier than any other Coues he has taken. John saw a total of 19 bucks (forked horn or better) during the five days in the field. 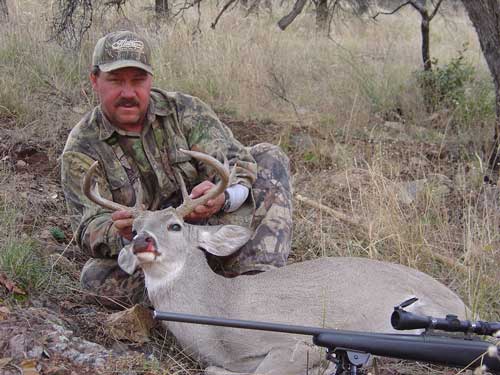