It was the second day of the season I hadn’t been able to hunt the first day because of school and we had to get ready. But we were finally able to go. The hunt was in southwestern New Mexico in unit 21A( Black Range). We (my father and I) got there at dusk. There were so many hunters in the lower section where the mountains weren’t so rugged and steep. We glassed it out and we didn’t find any deer, oh well it was only the first day we had been out.

The next day found us climbing Trujillo Peak. We figured there would be more deer up here because it was hardly accessible and there weren’t any hunters there. It had been overcast all night and it had drizzled a little bit the night before, now on top of that mountain it started to poor and nothing was visible because of a fog that had fallen down over the canyon. No matter how tough the deer are, but they weren’t even moving around in this.

My father Glen and I hiked down the mountain, got in the truck and drove out of there! We were beginning to think there might be a flood. The creek next to us that had been dry all summer and autumn was now rising. We drove to the highway and we were just “cruisin'” looking for deer on the forest areas of the unit. We decided to eat lunch in the nearby town, Hillsboro. We pretty much did this all day.

The next day was perfect except for an early fog that was at the top of the mountain. We hiked up there anyway and waited it out. It was well worth it! It was some of the most beautiful country I had ever been in. We hiked along and glassed until about noon until we found tracks. They were big mule deer bucks by the size of the tracks. They were very fresh probably seconds before we got there. They had winded us and they were on the move. We stalked them as in New Mexico you can hunt either whitetail or muleys. The tracks led over the peak and on down the other side, we never saw them.

An hour later we were following more tracks when all of the sudden my dad stopped and said, ” There he is!” across the canyon here was a big mule deer buck! He was probably 27 inches wide, most likely a ten or twelve point and he had mass. He was 600 yards away. There was a little cliff that was just below us that we could get to and try a 400 yard shot( I had my dads 300 Win. Mag) but when we crept up and looked over again he was gone! We carefully approached the spot where he had been just to be sure he hadn’t just laid down. He was nowhere to be seen. We walked to where he was standing and found that he just casually walked over the other side ( as he was near the top). We looked on the other side and didn’t find him there. We walked back to camp a little disappointed. I had gotten a deer for five years straight and I didn’t think I was going to get one this year. We did enjoy, however, a nice meal of bacon burgers that settled our nerves a little.

We discussed that night that maybe we should just go home. I refused me just knew we could find a deer in that canyon we had been in. The next morning we decided to take a different approach, instead of being winded by the deer because of the furious wind at he top we walked along the bottom of the creek that had flooded before and we glassed the nearest mountain just in case. No deer. We walked for about twenty minutes before we stopped beneath a pocket next to the canyon where we had seen the muley. My dad glassed and as soon as he put them up to his eyes he said, “There they are Jord” I said “No Way!,” ” I think they are Coues Deer!” I couldn’t believe it I looked up there about 900 yards away with the twenty four-power scope and saw the two bucks. I didn’t really care what size they were because I figured any Coues deer is a trophy. They were feeding along a patch of mahogany. We stalked up to the hillside across from them. They were about 500 yards away. I had the cross hairs right at the tip of his antlers. He was way bigger than I had hoped for. I almost pulled the trigger but thought better of it. They were feeding toward us. Let them come to us. They disappeared beneath a mountain between us and them. My dad was glassing and glassing but all of the sudden we both saw them a the same time. They were 274 yards away looking straight at us!. I got the gun ready and rested on a kind of unsteady rock. The situation was sort of bad because they were facing us. The shot would be tough. I was shakin’ like a leaf. I aimed at the front deer as to what my dad instructed. He was a nice 4×4 16 inches wide. I jerked the trigger and missed. They took off down the mountain and into the bottom of the canyon. I was very upset at myself because I had missed the shot. My dad decided to walk over there and looked for a blood trail. I knew I had missed though. We found no trail and we just sat there thinking what to do? We sat there for twenty minutes when all of the sudden the deer came walking up the other side eating! I had trouble finding them but I finally did. He was standing right under a big pinyon tree. This shot was tough too because his butt was to us and his head and neck was turned to the left. My dad said to shoot when I was ready. I put it right at the hump on his neck and shoulder and squeezed the trigger. He dropped like a rock!

We walked over there and found him to be a very big buck. He was 16 inches wide with 8 points and very long main beams. What A Hunt! 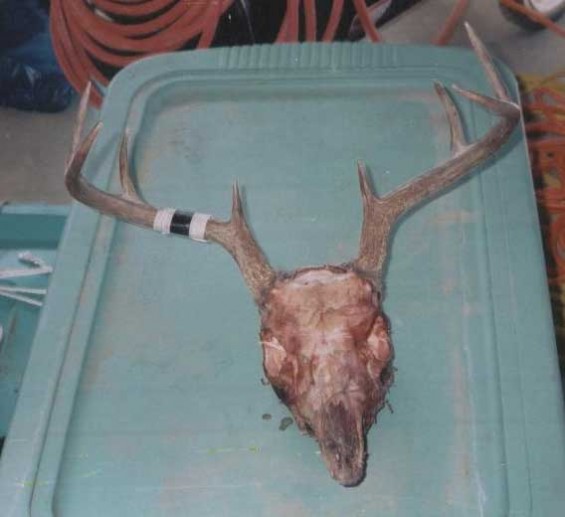 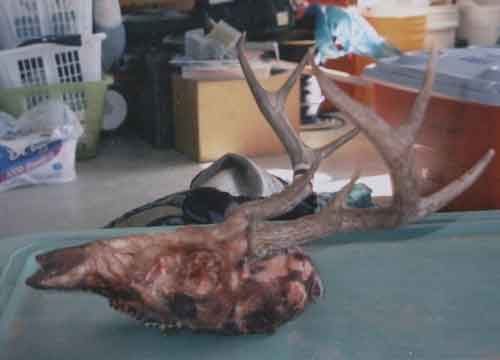 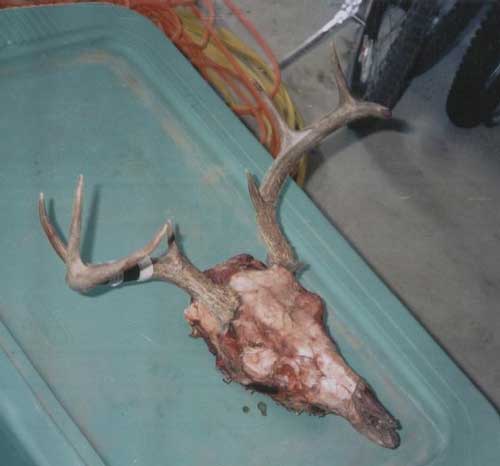