My friend Chris Dunn and I drove all the way from the Verde Valley around Cottonwood to unit 32 to go look for Coues sheds back in the spring of 1995. I had been there hunting Coues deer a few years before that with my Dad and remembered seeing a lot of Coues and mule deer sheds laying about during the couple days I was there. With this in mind we headed back down there with visions of picking up a lot of sheds.

After driving for several hours to get to our destination we arrived right at sunset where we saw some whitetail does on the horizon as we parked to camp for the night. 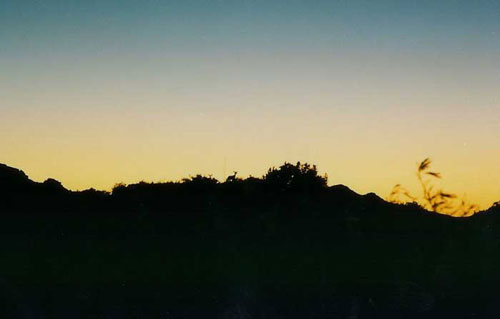 Both of us were quite excited as to what we may see and/or find the following day. We set up camp and ate some dinner and after a while, we crawled into the camper to sleep.

I woke before Chris did the next morning and it was just getting light enough to glass. I set up my binos and glassed the ridges in search of deer. I began seeing deer everywhere as the sun came up. I’d see 2 Coues does over here, 4 more over there and then several mule deer does hanging out together on a different slope. This continued for quite a while and I ended up seeing dozens of deer. I was in heaven! Chris was still having trouble getting out of the warm sleeping bag so I continued to glass. I spotted about 6-8 muley does about 2/3 of a mile away feeding on a slope and above them I thought I was looking at 3 more Coues does near the top of the hill. I soon realized that these does had some abnormally long tails and passed them off as coyotes. They’d dart in and out of the bushes sort of playing around when I finally realized that it was in fact 3 mountain lions! I hollered at Chris to get out of the truck and come look at these lions. He scrambled out of the camper and couldn’t believe what he saw through my binos. We watched them for probably a half hour and quickly decided to put a stalk on them as Chris had a tag and his Thompson Contender pistol with him. We hiked across the small canyon and around the backside of the hill that they were on. We slowly crept over the top of the hill and got to a dead juniper tree stump that we knew the lions had been approximately 50 yards below. We quietly got set up and started to glass. All the sudden we realized that we were in fact already being watched!

There, sticking through a clump of bear grass was the vague shape of two lion heads looking our way. WOW!! What a sight to see. They’d continuously peek through the grass, apparently to check on us, then disappear again. This went on for a bit and then nothing for a while. We decided that Chris would go around the tree on the right and I’d go on the left. As I got within about 30 yards of the tree one lion jumped out. I yelled at Chris saying, “On the right, on the right!” All the sudden the muley does that had been below the lions were scattering in every direction running for their lives as one of the lions went bolting down the hill. Chris never fired a shot in hopes of having more of a sure shot as opposed to a running animal.

I kept heading towards the left side of the tree as Chris was still uphill and to the right of me a ways. As I rounded the tree I noticed a patch of tan/orange hair about 6′ from me under the tree! I said a couple expletives and slowly raised my 35mm camera. I slowly walked down and around the base of the tree continuously taking pictures as I went. I got around and in front of the tree where I had a clear shot of the lion and took as many pictures as I had left. Chris finally got next to me and couldn’t believe that the lion was just sitting there staring at us from about 8-10 yards away. Occasionally she would kind of close her eyes as if she didn’t care we were even there. I finally ran out of film and walked back up the hill to my pack to get more film. I couldn’t believe it when I got back to Chris and the lion was still laying there. I took several more pictures. Chris even took a couple of me, taking pictures of the lion, to show how close we really were to her. I asked him if he was going to shoot, but after being so close to her for that long he decided to pass and just enjoy the moment…….unless she ran of course. The closer I’d get to her, taking her picture, she’d lay her ears back and get a “don’t get any closer than that buddy” look on her face. 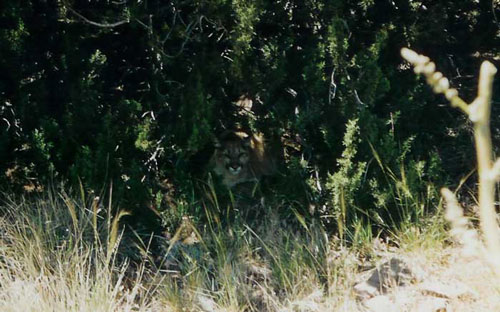 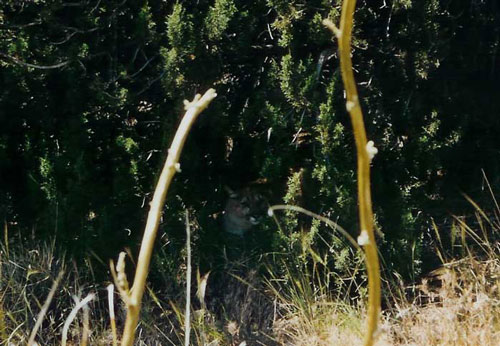 We finally decided to have some lunch, so we did, 15 yards from a mountain lion. We never did see the 3rd lion, it obviously got away without us seeing it.

Later we finally got to the shed hunting we had came there for. After all the walking we did I found no more than one old 2pt muley shed. Chris however found 2 fresh, small 2pt Coues sheds as well as an older decent 3pt shed. At the end of the day we had seen a total of 55 Coues deer and 35 mule deer and saw some awesome country and were fortunate enough to see some mountain lions. What a day!