August 29, 2012 by CouesWhitetail in Archery Gallery, Hunt Stories with 2 Comments 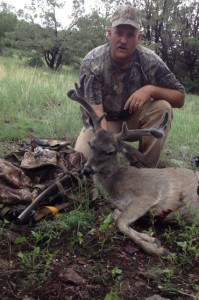 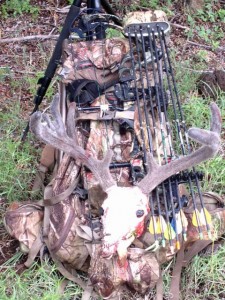 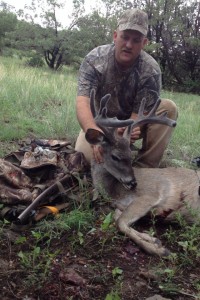 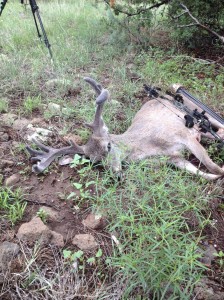 Well my 2012 archery hunt came and went this year on opening day.
It all started this summer with a load of scouting.  I have been into this area dozens of times in the last year knowing there were some good bucks in there.  I had a couple of nice bucks on camera this summer, but had only seen this guy once before a distance and only for a second.  I new he was a good one but not sure how good.
fast-forward to the week of the hunt.   I went up weds morning to start looking.  Of course with all the weather the prior week, and raining weds my springs had a slim possibility of producing so I decided to head  out to my glassing point and set up and do some glassing.  Right away I spotted a group of 4 bucks one of them being a 100+ 3 point that I was considering shooting if the big guy didn’t show.
With a heck of a storm moving in I new conditions were gunna get tough.  Wow what a long night of sleeping on a cot with a tarp over me.  I couldn’t scout for most of the morning Thursday due to the rain, However when the storm broke a bit in the afternoon I went back out to glass.  Just before dark I glassed up the big dude I was looking for.
After contemplating how to approach him in the morning I was in a toss up.  He was on a bench in between two huge canyons.  I decided I better get to the glassing spot early, locate him and plan from there.  At daylight on Friday when the sun came out enough to see I was not a happy camper.  I couldn’t even see the bench they were on, wouldn’t you know it, FOG.  It was the longest two hours of my life.  Finally I got a little break in the fog and put some glass on the bench.  Instantly I saw the two little bucks that were with him.  I new he was there.  I then decided to boogie over there and see what I could do.  After nearly 2 hours of crossing two canyons and scaling up to the bench where he was, I was to my dead juniper that was my goal.
At this point my buck fever was setting in hard.  I had an arrow knocked and slowly slipped my way in to what I thought was fifty yards from where I thought they would be.  When I got to my next tree I looked through the bush and saw a deer feeding its way into an opening.  With having stocked in of tons of deer in my day the scenario usually goes, “when I got there the little bucks were in the way of the big buck not offering me a shot, or the big one wouldn’t step out”.  Not this time.  When the deer cleared the brush I was pleasantly surprised to see I t was him.  As soon as I saw the rack I drew back figuring the yardage at 45. As soon as he cleared the tree I let it fly.  The shot was tru and I nailed him perfect.  I watched him disappear into the brush.  At that point I was a wreck.  Heart pounding, shaking, then doubt on the hit all start playing tricks on me.  I waited about 20 minutes and the slipped up to the shot location.  I looked above where he was standing and saw the arrow.  Pass through, but no blood, I walked down the trail through the brush twenty yards and started seeing blood and a lot of it THANK GOD I was thinking to myself.  After fifty yards of trailing there he was.
Wow what a hunt and what a buck, defiantly was worth all the scouting and hard work. He has a 19″ inside spread and 21″+ main beams.  Was defiantly happy with him and there was no ground shrinkage on this guy.
Thanks for reading: Josh Weeks