by Josh Epperson
(originally posted in the forum) 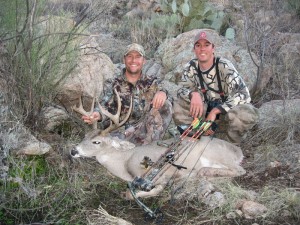 Josh and Andy with Josh’s buck.

Truth be told, my good friend Andy Knowlton found a few nice bucks on Friday and called me and invited me down for some spot-n-stalk, southern AZ style. Long story short, I glassed one of the bucks up at 11 AM on Saturday morning as he was following a doe. Andy and I crossed the canyon and got above the bedded buck and his doe. We slowly peaked over the ridgetop and found the doe feeding but no buck. Eventually spotting the buck after he’d already seen our ugly faces at a mere 75 yards! We backed out and opted to try again on Sunday. Sun-up found us glassing again and as the hours went by Andy finally says, “I got a bedded buck!”. Now this wasn’t just your run of the mill spot Andy pulled out of nowhere, this was an AWESOME spot he made on this buck. At nearly 3/4 of a mile Andy saw this bucks head and antlers sticking up as he was bedded. SHEESH!! Eventually the buck moved to a better and more stalkable bedding area and our stalk was on. Four hours later found Andy at approx 45-50 yards of the bedded buck with his longbow, while the buck was facing him no less, and myself at 120 yards away in a different direction. We had studied the area prior to our stalk and we both had a good feeling what this buck was gonna do when he got up …He was either gonna go in Andy’s direction or down the draw towards me. Lucky me he opted to come down the draw. After rubbing his glorious antlers and feeding his way down the draw, I had about every rock and cactus ranged and was as ready as you can be for a buck like this. 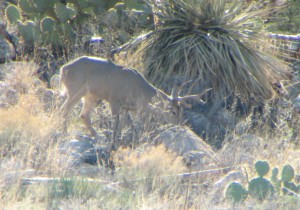 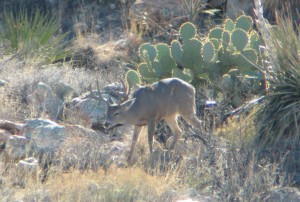 Lucky for me I was sitting down as he came by at 47 yards. Had I been standing, I think the jello, my knees had turned into, would have made for one very unstable shot. Well ol Grongulous takes the first shot and shoots right over the buck’s back. The buck ran 15 yards, stopped and looked around like what the H was that! I slowly got another arrow on and readied myself for another shot. He relaxed finally, turned broadside again and I let another one go. This time the expandable blades on the broadhead deployed rather prematurely and made for a beautiful whizzing sound as it landed at the hind legs of the buck. LOVELY!!!! Now the buck is getting antsy and is about to get the S out of Dodge. I slapped a 3rd arrow on, pulled back, guessed the yardage, grunted to stop him and let her rip. I hit him a tad far back but could tell the arrow entered him and skewered him lengthwise. Just a few inches of arrow showed. Andy had been filming the whole ordeal from his vantage point and got it all on camera! We waited a while and then went to look for blood…. NOTHING! Could barely even find a track in the gravely rocks. Anyway, I stalked down the draw he ran into trying to find something but only found a couple running tracks here and there. About ten minutes later I spotted his head and antlers laying against a big boulder deader than dead!!!! I screamed, Andy screamed, hugs and various other pleasantries were exchanged as we realized what we had just accomplished. It was truly the absolute most awesomely planned and executed stalks I’ve ever been in on and to see it come through successfully with a good friend like Andy just made it that much more special. Thanks Andy, you are a true friend and I hope we have many more fun ventures in the woods together like this one! 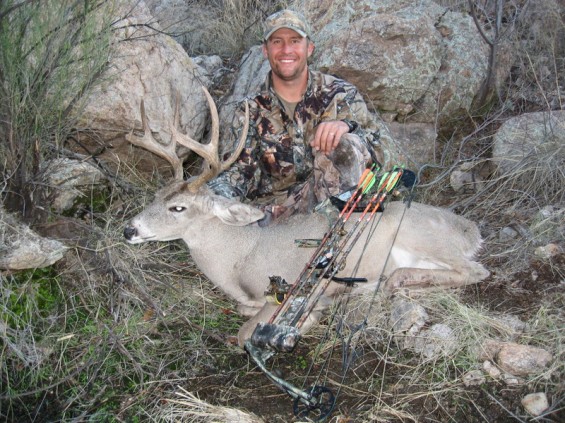