October 20, 2015 by jasong in Featured, Rifle Gallery with 0 Comments

This year has been a challenge, and we were only able to scout one weekend. During Scouting Trip we glassed up 75 mule deer, one black bear, and one bull elk, and saw numerous tracks so things looked bright.

We made it up on Thursday to get in a short glassing session.. My Future son in law had purchased a bear tag since i have seen bears in the area nearly every trip into the area. As luck would have it Lane and I arrived to scout and glass, but Anthony didn’t as he had a blow out in Payson. Lane and I glassed for about an hour and kept hearing noises from the cut next to us but could figure out what it was.. Finally a 375-400 lb Jet Black Bear walked out of the brush about 300 yards from us, he stood up barked/ whoofed at us then ran up the opposite ridge. We could have easily taken this bear but the Tag holder was sitting in Payson with a Flat so we let him walk.

Opening Morning was hopping, Lane and Destry had a 380″ bull come into 10 yards… the bull couldn’t decide if he was going to charge or retreat for the longest time, but finally he retreated to top of the ridge where his cows were.

we hunted high and low, long and hard… Lane and Lillimay had missed opportunities on Saturday and Tuesday Morning.

Tuesday Evening Lane and Tucker connected on two Elk within minutes of each other, and then the work began. We had to get the Elk off the Hill and to Clints Well before the trailer closed at 9:00 PM (as the locker in forest lakes was closed) (made for a really long night/ didn’t make it back to Forest Lakes until 12:30 in the morning). Lillimay connected on her elk the following Morning around 7:00 am. Thanks to Steve Norland, Anthony Rochotte, and Skyler for Helping on the pack outs. 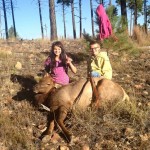 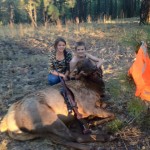 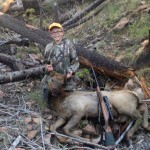