March 12, 2013 by CouesWhitetail in Featured, Mexico Gallery with 0 Comments

Just wanted to post a quick video of the Coues buck I killed this year with Colburn and Scott Outfitters in MX this year.  My father and I had a great hunt with Jay and Darr.  Those guys are serious about hunting Coues and their preparation was impressive.  This was definitely not the last time Pops and I will be booking with those guys.  At any rate, on the last day I glassed this buck up and called Jay over to take a look at it with me.  I knew he wasn’t a monster, but after some gentle prodding from Jay I decided to take him.  He was the 2nd double beamed buck I had seen in as many days and that combined with his character was more than I could take.  Jay stayed to keep and eye on him, and I looped around to get within range as we were at 1100 yards.  I admittedly was a little nervous about the shot as Jay had kept saying how he was “looking forward to seeing The Coues Sniper in action”

.  But I was able to find a perfect setup at 465 yards – prone, no wind, in a saddle between two bluffs, and a flat rock in front of me to pre-load the bipod.  The buck was bedded with his head over his vitals so I took my time and was able imput my actual atmoshperics and even dry fire a few times.  Jay and I were talking on the radio when the buck got up, that’s when the video starts.  I waited for him to stop and let the crosshairs settle right on his shoulder and timed my squeeze with the exhale on my breathing cycle.  I was shooting my 300 ultra pushing 208 grain A-Max’s at 3180 fps.  The result was pretty devastating.  Impact was exactly where I aimed and it was like you hit him with a sledgehammer.  When we got to the buck, his legs were folded underneath him just like he was bedded or you posed him for photographs.  Exit hole was about the size of a silver dollar.  I was very happy both with the deer, and the performance of the A-max’s.  Thanks again to Jay, Darr, and Janis.  One of my favorite hunts, and bucks, for sure! 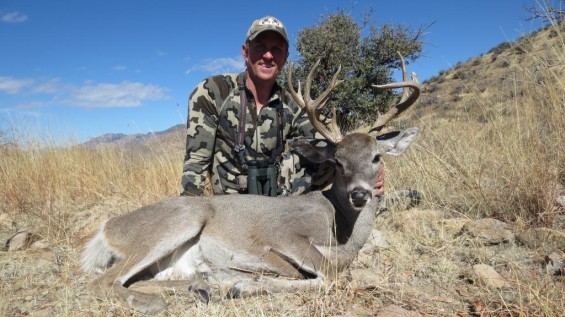