Hunting as a little kid in Arizona, I never really thought about what it would take to get a book whitetail. After growing up and getting into hunting more seriously, I started making the decision to put in for some premium hunts. After about two years of getting nothing, my dad surprisingly told me that I drew a great Coues Whitetail tag.
As my hunt grew near, my dad, Mark, and I started to make plans on backpacking in and camping out. I told my dad that I wanted one of two things, a book buck or a non-typical. One of our good friends, Mike Sacco, informed us that he wanted to help us out on the hunt. We planned on taking in water, food, and some other stuff and setting up our base camp. Well the weekend before, my dad and Mike made two trips into the country and dropped off 15 gallons of water, dehydrated food, and enough food to feed an army. Now with the camp set, it was time to have some fun.

We started hiking at 7:00 a.m. and were in glassing position by 8:30. The day started out slow but it picked up by noon. We glasses up a good buck. He might have been a shooter but not on my first day. The deer had great mass, length, and width but his G-3’s on his left side were very small. We decided to pass him up. We went back to camp and had lunch and set up our tents. By 3:00 or so we were back up glassing. The night really didn’t produce that much but right before dark we spotted a nice buck. We could not tell anything but we could tell that it had a fork on his right G-2. That night I split a wonderful dehydrated meal with Mike.

The next morning we were up and out early. The first buck we spotted was the one we saw the night before. He was a good, mature buck but smaller than the big deer of the first day. We saw a lot of small bucks and does when my dad spotted a potential shooter. It was about a mile away and walking around. We could not get a great look at him but we could tell that he was really good. My dad and I decided to go ahead and put a stalk on him. By the time we got to where he was hanging, Mike told us that there were several smaller bucks with him. That made it a lot harder. After making some adjustments, it was time for me to try to get a bullet in him. At a distance of 380 yards I let one shot go. I didn’t hit him. The buck didn’t seem to even notice the shot. The only thing he cared about was the doe. After a few more shots I could tell that he was hit in the lower front leg. He bedded down in a little cut. It was getting late so we left him alone for the night. As I walked back to camp, I could not think of anything but the missed shots and the wounded buck.

We woke up even earlier the next morning. The plan was to go right back to where we were the night before. As my dad and I climbed into position on the mountainside Mike settled into a great glassing spot on the opposite side of the canyon. We spent about two hours glassing and could find nothing. My dad told me to keep looking while he went down to where we last saw the buck and looked for sign. The one thing I remember Dad telling me before was that if the deer was here, we would have to walk right up on the deer before the buck would get up and run. My dad walked around for a while and tried to locate the deer. He came back up to me and we packed up my stuff and walked up the canyon a little more. As we came back down, my dad stopped by a juniper tree and told me to get ready because if the buck were still there he would be around here. We both walked around a tree and split up. I was almost ready to get a drink when my dad started to yell for me. As I walked up to him he told me that we had walked within 15 yards of the buck. We ran up to the tree and had Mike try to get us on the deer. As they were talking, I spotted the deer 60 yards away and motioned to my dad. As the deer turned I shot and the buck fell right to the ground. We walked up and my dad was talking to Mike on the radio as I picked up my deer and I almost wet my pants. After my dad was done with Mike he picked up the deer and admired it. Then it happened, my dad ran right to me and jumped into my arms and almost knocked me over. We took a lot of pictures and the real fun began. We de-boned him right there and walked back to camp. We broke camp and filled our packs to the maximum. It took us about an hour and a half to get to the road.

I learned a valuable lesson on this hunting trip. That lesson was to always stick with everything. We took this buck into the taxidermist and he grossed this buck at a little bit over 112 non-typical. I would want to say special thanks to Mike Sacco and my dad for helping me on this hunt and taking the time to pack everything in the weekend before. I don’t know what I would of done with out your help. 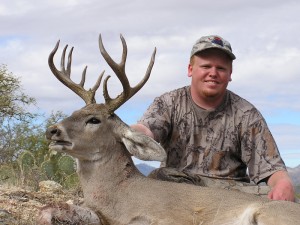