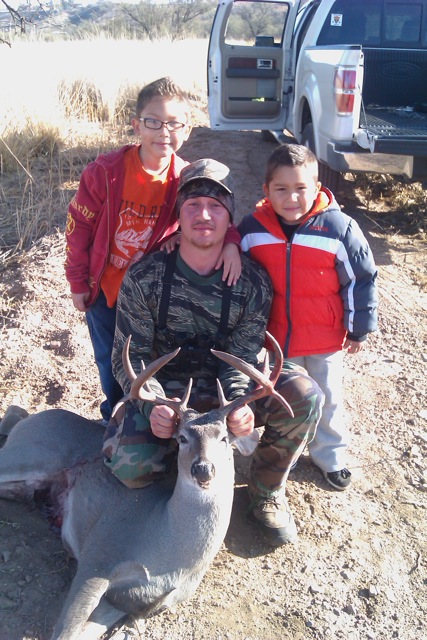 Luis has shared the details of his hunting story with me. He says this is the buck that got away from him last year. He went scouting since early September but didn’t see him until mid November. The first day of his hunt he spotted the two does that he had seen with this buck. 10 minutes after a border patrol came down the canyon and spooked them away. After that he didn’t see anything all day. The next day he didn’t see anything, not even the does. December 11th early morning he’s walking up to his spot, when all of a sudden he turns around and the Buck is standing about 200 yards from him with two other bucks. He was so excited his knees started shaking and began getting buck fever. He couldn’t decide whether to shoot standing up, kneeling down, or laying down. He ended up taking off his back pack, laid it on the ground, and leaned his rifle on top of it. As his hands were shaking he took one deep breath and fired one shot. The buck immediately feel to his side. Luis jumped up in excitement yelling and as he turned to tell someone, he remembered he was alone and gave himself a high five.