Matt’s January Coues with a bow

In January of 2003, I had harvested a small mule deer with my bow after only having it for about six months. This meant I could not participate in the fall draw for deer, and left me waiting all year for January of 2004 so I could have another chance to hunt since I was unsuccessful for Elk and Antelope.

January of 2004 rolled around and I had an archery tag and license prior to the first day. Work and other commitments kept me from really doing much scouting, although I did manage to get out for a couple of days. The first few days I was able to hunt with a friend, but as he prefers mule deer, I was not hunting the type of deer I really wanted to pursue.

One weekend in mid-January I found myself sitting at home with company from out of town. I told my buddy, “Let’s go glass, this sitting around is making me crazy.” I tossed my bow and tag in the truck just in case.

An hour later and we were in Coues country, glassing and content. Within a few minutes we had deer spotted… and one was a buck. He wasn’t really hot after the does he was with, kind of hanging on the fringes. I told my buddy I was going to try and get close enough for a shot while he watched.

I carefully circled around, and stalked towards the deer, keeping the wind in my face. I could see the deer out in front of me, but couldn’t see the buck. I kept stalking closer, scanning area in front of me for the buck. We saw each other at the same time, with 20 yards and a half-dead piece of brush separating us. I had an arrow nocked, but was the bow was not drawn. I figured if I drew back, he would spook, but if I didn’t draw, I couldn’t shoot. I decided to heck with it and drew the bow. The buck stood motionless, as if he was invisible and this couldn’t be happening. I set my 20-yard pin on the vitals and released, to hear a loud “kerthump” and watch him run off after the fletching disappeared just behind his shoulder.

I stood there motionless wondering if this could be happening. I went to the spot where the buck stood and a few steps past, and found my arrow soaked with blood. I kept thinking to myself to be patient and wait at least 30 minutes. After what seemed like 3 hours, I started tracking the deer down the hill. 60 yards and there he was, piled up at the bottom of a steep drop off.

My buddy came up the hill to tell me how all the deer ran off, not even knowing I had shot. He was laughing and telling me how one of the deer was really clumsy and tripped when it got to where I was standing. I let him finish and pointed out the deer. We cared for the animal and carried him out, with me still in disbelief that I had harvested a Coues with a bow. I can’t wait for January 2005. 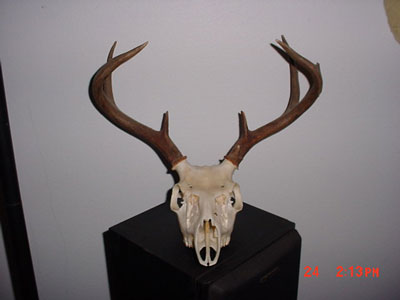 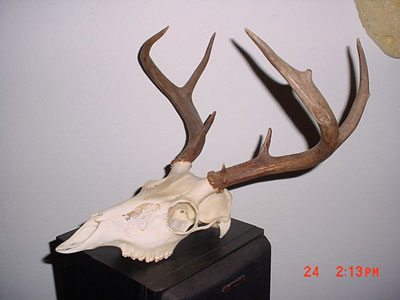