This was our first Coues whitetail hunt in Southern Arizona. These deer were taken, unguided and on public land, in the Oct. 2002 general season. Both were killed opening morning. This was Michelle’s first deer hunt and Joe’s first Coues deer. What a way to start!

My wife Michelle is now twenty seven and we had just gotten married three weeks prior so this was sort of our honeymoon hunt. Michelle and I had found two groups of four bucks on scouting trips prior to the hunt. We nicknamed the bachelor herd “The Posse” because every time we went to look for them we usually found them within a few hundred yards of where we first seen them. The buck Michelle took was given the name Giagantor because he stood out in the crowd. This was Michelle’s and Matt’s first deer hunt ever and they were out to harvest any buck. I had already killed several trophy animals so my goal was to make Giagantor my wife’s first Coues deer. Well about 7:00 am I glassed the mountain lion that was running the basin, but I was only able to deliver minor flesh wound before the cat got away. When Michelle and Matt came to investigate what I had shot at we found the buck that Michelle eventually tagged and watched it bed down. Michelle was able to sneak up and put down the buck with a 300 yard shot.

The same morning about 2 miles away my brother Joe tagged his first Coues buck. The buck was with several other bucks and they tried to stay hidden as long as they could but couldn’t handle the pressure. Our friend Robert glassed the deer up about a 1 1/2 mile away. When they got close to where they had seen the deer they slowed to a slow stalk. The herd of bucks jumped and tried to get over the top of the ridge before Joe could get a shot off. Fortunately Robert was next to him and pointed out the biggest of the herd to Joe and he was able to get a quick shot off before they disappeared. When they made it to the spot that Joe first hit the buck it jumped up and Joe finished him off.

During this hunt we had four tags and filled all four with two of them being great Coues bucks. Not bad for our first Coues deer hunt in the desert! Many thanks to Robert for teaching us how to hunt the Coues whitetails. 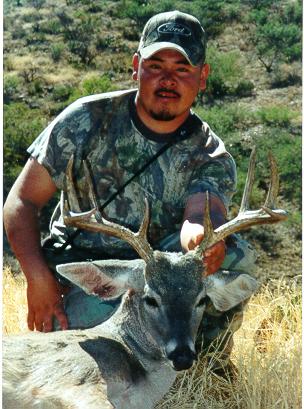 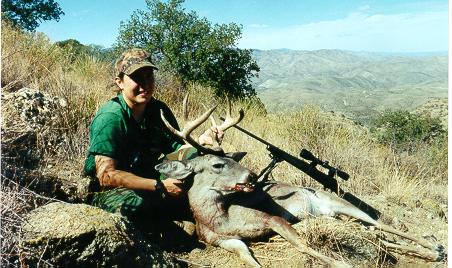 Michelle Gonzales with her first deer ever. It’s a great 4×4 Coues buck which unofficially gross scores 98 4/8 and nets 98 1/8.