After about an hour of hiking, we got to a great spot that we wanted to glass before the sun came up over the top of the ridge. We sat down and got comfortable, because once you start glassing you know you are probably going to be there for a while.

After about 30 minutes of glassing up a few good buck and several smaller bucks, my buddy Martin glassed this guy up from over 1000 yards. He was moving down a ridge, feeding on barrel and prickly pear cacti. Martin pulled out the spotting scope and got a good look at him, “whoa, there’s your shooter!”, Martin said. After getting a look at him, I concurred and we knew the next task was to get as close as possible to where he was at / going. After about an hour of closing ground, we finally got to within 100 yards of where we last saw him and started glassing the ridge he was on. We found a doe and a spike close to his last location, about 50 yards from us.

We didn’t want to spook them, so we sat there for about 30 minutes, hoping they would bed down and we could continue our stalk. After deciding we needed to move closer to that big buck, we did spook that doe and spike. They ran straight over the ridge, didn’t even stop! We also spooked some javelina, but they stopped about half-way up and came back down to the bottom. After getting situated, we watched and video taped the javelina (nine) for a few minutes.

We thought that maybe we “boogered” the hunt. We weren’t really sure if he escaped when the spike, doe, and javelina spooked or if he sat tight and was still there.

After listening to Martin’s and my stomach growl for the last hour or so, we decided to have a snack which of course made a lot of noise, because I had to dig it out of my pack. Interestingly enough, the javelina didn’t seem to mind. I guess the buck didn’t either, because unbeknownst to us he was still there.

It was starting to get warm, the time now was about 11:00 AM. After debating what was to be our plan of action and after two hours of glassing every tree and shrub, over and over, on the ridge we were watching, we decided to try to make a move.

We convinced ourselves that he was still in there somewhere and needed to flush him out. Martin moved across the wash and up the slope of the ridge, but he didn’t come out. As Martin was making his way across the ridge, I was paralleling him, so that if he did flush him out, I would be a good position for a shot. He was throwing rocks into bushes and trees, and nothing happened. Then as he moved back down the mountain to the wash, he kicked out the javelina we taped, but no big Coue’s buck.

Disappointed and frustrated that we didn’t see him, Martin made his way back over to the other side of the wash where I was at and we couldn’t believe he didn’t get up.

At the very moment we started to get ready to abandon this spot and move to another vantage point to glass, we heard some rocks move behind us. “That’s him!” Martin yelled. I readied my rifle and took a bead on him through my scope, all I needed was an opening to get a shot. My first opportunity, which was about 125 to 150 yards, I pulled the trigger and nothing happened…my safety was on!! Stay calm, I said to myself, keep an eye on him. Then at about 200 yards, I got another opening and shot him in the lungs and then as he turned and ran back down the hill he was on, I shot him again in the middle of his back! We found him ten yards away from the second hit.

The time of the kill was 11:37 AM. Of course we took some pics and headed back to the truck at about 12:30 PM. I knew I was going to do a shoulder mount on him, so I carried him out on my shoulders. It was tough work, but it was worth it because the cape turned out perfect! We didn’t get back to our vehicles until 2:30 PM! The next couple days would consist of chiropractic and acupuncture therapy!

I went to my taxidermist, Chuck Meachum, and he gross scored him at 95 3/8″, green! He is an awesome buck and it would’ve been hard to turn down the opportunity to get this one. We did have another three days to hunt, but you just never know if you’ll get another opportunity at a good one like him. He has good tine length and we especially like the way his main beams curl inward, like a basket. He also had a nice little “cheater” tine on his right side that we didn’t see in our optics. 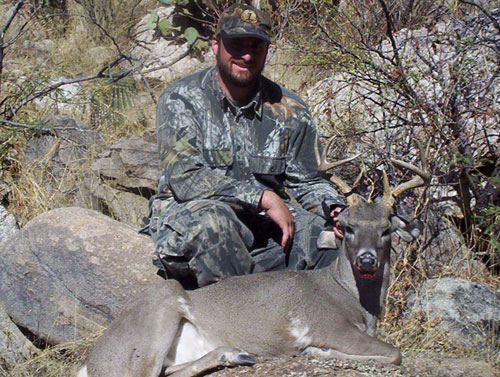 Bill with his fine buck. 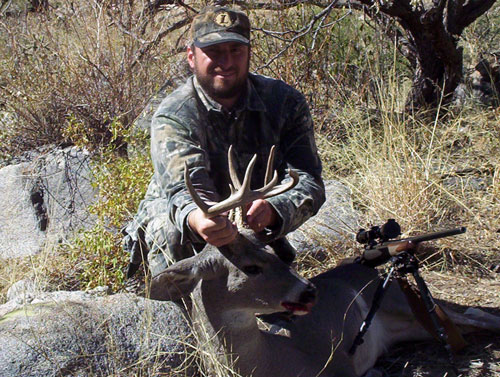 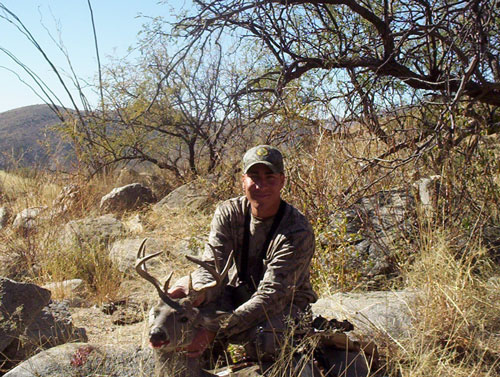 This photo show the little extra point on the right antler.