by Lee Molina (aka couesdiehard)

I watched him bed at 10:00 am at 600 yards and waited for him to get from behind about the only tree on the whole ocotillo hillside. At 332 yards I waited until 1:30 pm before he got back up. In the meantime I checked out over a dozen other deer on the same hill but he was still the biggest and he was the only the 2nd 3-point or better I had seen in 5 days. While I had waited I had tipped my gun off it’s “Snipe Pod” right onto the scope. this was my backup gun. the same thing happened to my .300 WSM the day before.

I aimed at the 3×3 while he sparred with a little spike and a large forkhorn watched the match. At the shot, the 3×3 moved downhill but didn’t fall. He eventually laid down and started chewing his cud! In his new location I had to move higher up to get a shot. At 348 yards I could see the junction of his neck and back between two ocotillo stalks. I fired and he rolled over. Imagine my surprise when he stood up! But he was hit hard. I could see blood falling from his mouth. I aimed for the middle of his spine to break him down and completely missed. He laid back down and I again aimed for the junction of the neck and back. This time he fell over and rolled down the hill.

When I put my hands on the buck I saw that my scope had obviously been knocked off target and the bullet was hitting 4 inches high and 2 inches right at 348 yards! Both times I aimed at the neck/back intersection I had hit him and both entry wounds were within 2 inches of each other. The first high in the neck. The second at the base of the skull. 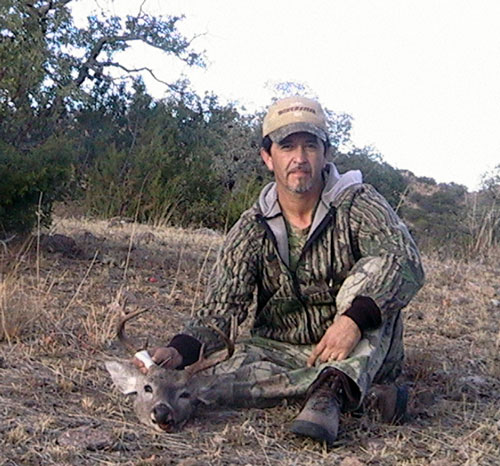 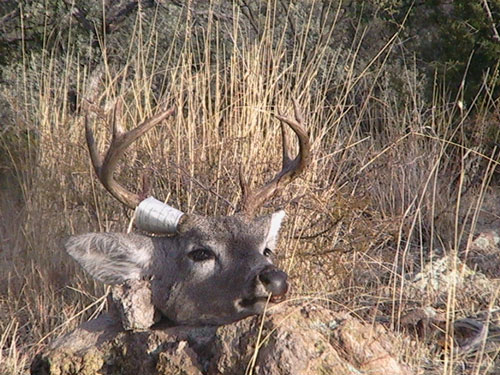