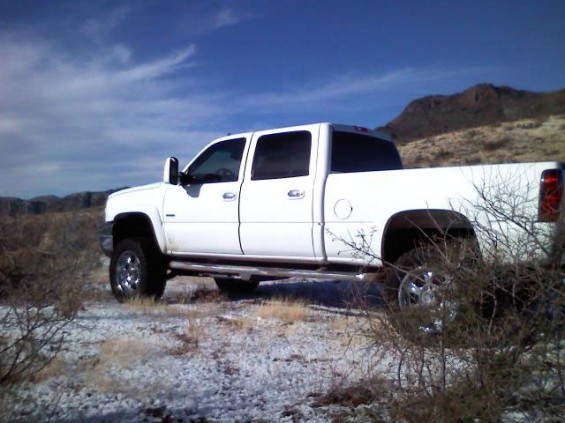 I have been going crazy trying to find time to get out and do some archery hunting. I have not done much hunting this year so I was getting anxious. I was finally able to get out yesterday for a day trip and what a day it turned out to be! My intentions were to find some rutting muleys and shoot the first buck that gave me the opportunity. After abandoning the first spot I drove down the road a short distance and parked the new truck. I hiked a short distance to my glassing spot and found this cool frozen waterfall. 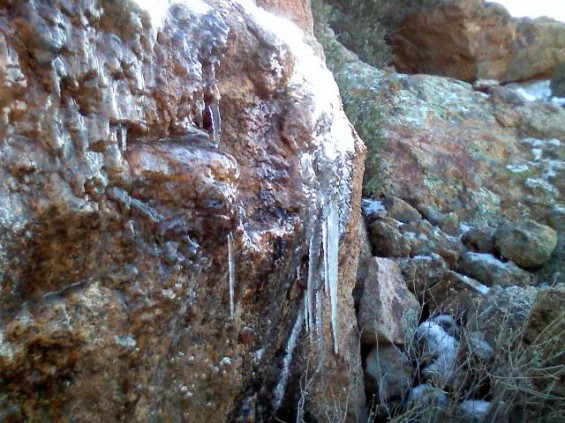 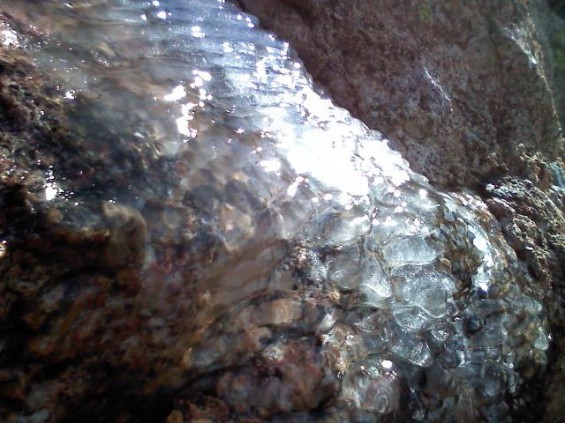 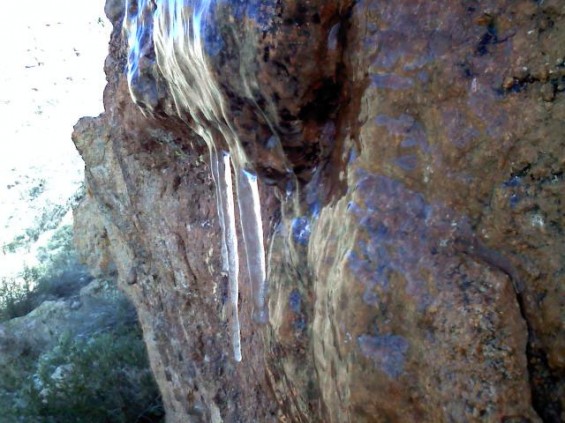 I set up to glass overlooking awesome muley country but of coarse it’s hard to break old habits so the first thing I do is point the glasses way up the farthest mountain and immediately find 3 coues bucks a mile away and up on a steep open hill side. I watched them for a bit and then decided I’d better find some muleys a little closer. The spot I was at is an old honey hole of mine and I used to hunt it a lot. I would always find a lot of muleys and see a couple of coues up high. Well of course now I can’t find any other deer anywhere. I decided I would move the truck closer to the 3 coues bucks and try glassing from there. I was able to park the truck 1000yds. directly below the 3 bucks. I tried to locate some muleys from there but finally decided I’d better give the coues bucks a try. I didn’t feel like my odds were very good because there was no cover where they were. I left my backpack behind and just took my bow, binos, and rangefinders. I was able to get to 200yds. of the middle sized buck (a decent sized forky) but could not see any other deer. He walked closer and bed down at 175 yds. I decided to try to just stay low and try and close the gap keeping prickly pears between the buck and I. I got to 100yds. and all of a sudden a deer came down from above the buck and they both trotted about 40yds. and stopped. I’m not sure if I spooked them or they were just running around like I had seen them doing all day. They fed away slowly just out of sight so I got up off my knees and quickly made my way over to where they had just been. I had about 10yds. to go to get to a tree I had picked out and I looked to my left and the forky is standing at 70yds. looking my way. He had turned around and was coming back when he caught my movement. he was unsure so he circled down wind of me and held up behind a small bush at 45yds. I needed him to take a few more steps but instead of taking steps he bolted and ran off the direction I had come from ( away from the other deer). At this point I didn’t know if all the other deer had run away or if they were just over the little rise ahead of me so I slowly walked towards it. I had gone maybe 40 yds. and all of a sudden a doe appeared out of nowhere feeding towards me. I was stuck standing upright in the wide open with the sun shining on me. I was trying my hardest to grow spikes on the doe when I caught tines coming from behind the doe. The biggest of the 3 bucks, a nice 3 point was coming from behind the rise! As he came up behind the doe she took off running towards me stopping at 20 yds. and pegged me! I could see the buck out of the corner of my eye just feeding but I was locked eye to eye with the doe. She stomped and head bobbed several times before bolting and letting out a snort on her way. The buck was now stopped behind a bush at 40 yds. Then the third buck a small forky came over the rise and stopped broadside at 50yds. Should I take the shot or wait for the 3 point and risk him bolting out of there. I decided to wait for the 3 point. Finally he stepped out looking my way trying to find what had spooked the doe. His vitals were just clear of the bush so with him looking right at me I drew put the 40yd. pin on his vitals and with buck fever now in full effect punched the release. MISSED! The buck ran and stopped where the small forky had been standing while the small forky ran to where the 3 point was just standing. I already had another arrow knocked and drew once again with the buck looking at me. This time I composed myself and put the 50yd. pin on his vitals and released. The buck leaped high into the air and as he was at the peak of his jump I saw my arrow fall out of his opposite side shoulder! As he came down his shoulder was broken and he face planted and did a forward roll. He ran less than 50 yds. and crashed!!! The small forky didn’t know what to think and came to 22yds. of mee staring curiously. After a few minutes of messing with him I walked over and retrieved my arrow. I turned and followed the blood trail down to my buck. It took me 13 years to kill something with my bow. I have missed a few, wounded a few, passed several, wounded a mountain lion at 5 feet, missed a coyote at 10 yds. This was long over due but well worth the wait.

Sorry this story is so long, hope you enjoyed it.

P.S. all I had in the field was my cell phone and it died after one pic. but my wife snapped a few when I got home. Thanks honey for putting up with me! 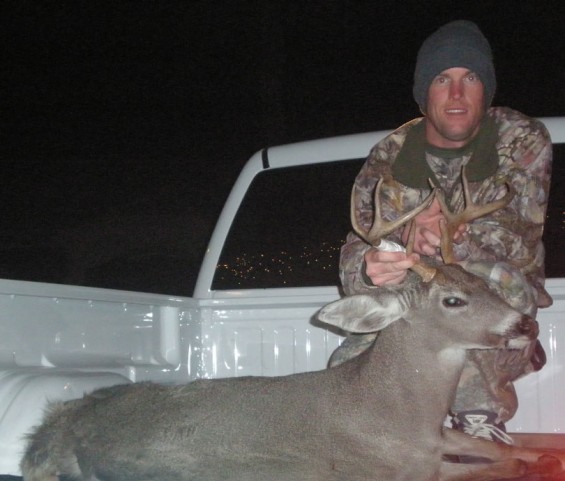 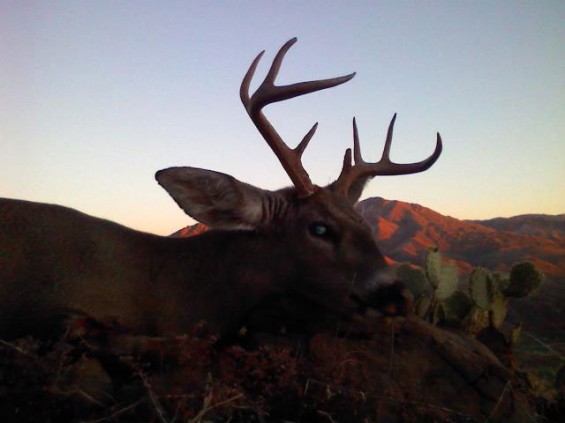 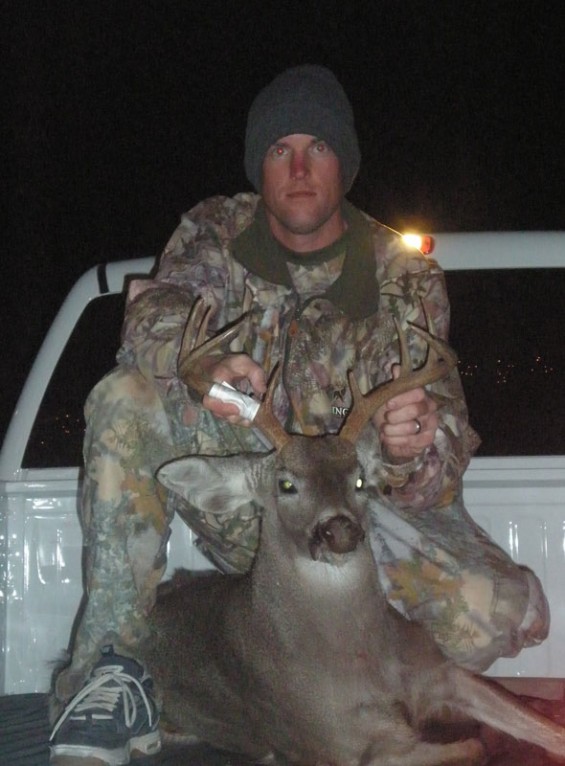