My dad is 63 years old and has been a diabetic for over 30 years. He has had several surgeries on his eyes and his feet throughout the years, so I want to begin this story by thanking God for giving us the opportunity to still be able to go hunting with each other. My dad has been hunting for over 50 years now and he still amazes me with ability to shoot.

My dad was fortunate enough to draw an early whitetail tag in one of our favorite units. Opening weekend, he had the chance to hunt with my younger brother who also had a tag and didn’t see anything that they wanted to shoot. I had my hunt in another unit, at the same time so I was unable to go with them. I got my deer on the 4th day of the hunt and immediately headed north to my hometown to help my dad on his hunt. My younger brother had to return to school during the week, so he could not hunt with us.

My dad had plans to do some work in the morning and I sure needed the rest of sleeping in, so we decided to do an evening hunt the next day. My dad was unsure of where to go because of all of the people that they had been seeing out in the field. I told him not to worry, that we should just go where we always find deer and not let that affect anything. My intuition was right, that next afternoon we spotted 8 deer and one was a nice 2×3, about 80-85 inches. Because of my dad’s physical condition, it was hard for him to see the deer so he decided to try to close the distance and get a shot at this buck. He did manage to get to 400 yards, but the buck sensed something was wrong and stared face forward at my dad and never moved for over an hour. With the light fading and the poor shot presentation the deer offered him, my dad made the wise choice to back out and come back in the morning to look for him.

The next morning we started walking into our glassing spot and we jumped 2 bucks right underneath us on the same hill we were on, they ran up the hill we had seen the buck on the day before. One was a nice 3 pt, bigger than the buck we had seen the day before. We just held tight and watched, as 2 more bucks join them. The buck we had seen the day before was not with them. We lucked out though, because there was a bigger one with them. Once they got to the bigger mountain in front of us they quickly settled down and started feeding. I ranged them at 450 yards and told my dad we just needed to get a little bit closer and he could get a good shot. We got to 375 yards and I had my dad lie down in the prone position and he used his backpack over a dead century plant stock for a rest. I told him the biggest one was in front and when he was ready to go ahead and shoot. As soon as I said that, my dad shot and the buck lunged forward and then fell to the ground. You Got Him!!! I told my dad, what an awesome shot. I was so happy for him. I sat there and waited as my dad walked up to his deer. My dad called me on the radio and said he was down and that he was a nice one.

I quickly packed up my gear and headed over to see the deer. I was so happy for my dad; he shot a great buck. We took a bunch of pictures and then I carried the deer back to the truck and we headed home. My dad gave me a big hug and told me that he had shot his first deer on that hill about 50 years ago. I will never forget that day and I just want to thank God for allowing my dad to still be able to do what he can do and enjoy the great outdoors with me. When we got home I scored my dad’s buck at 90 2/8 inches. 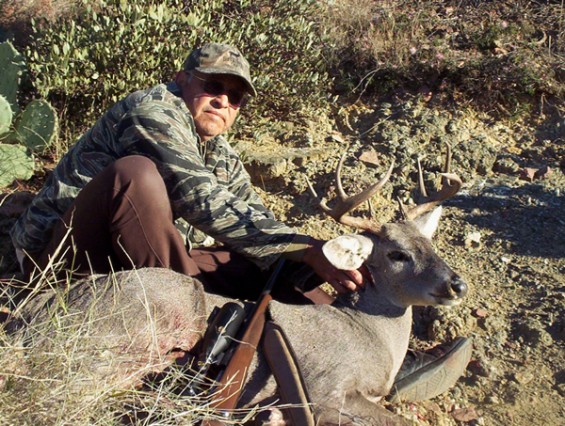 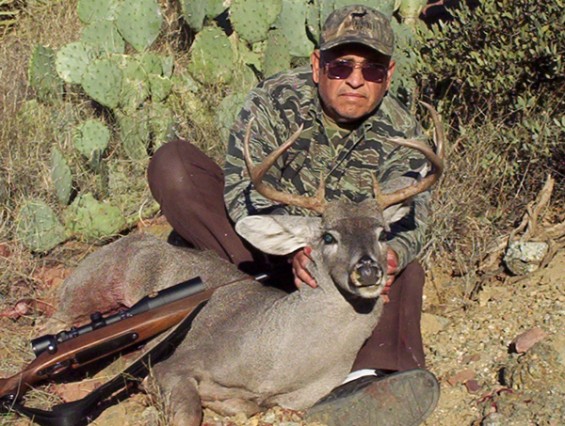