My father, DeWayne Hanna, was a hunter all his life until injuring his back at work. Unable to go each year he still purchased his deer tag hoping that his disability would not keep him out of the hunt. Not in a wheelchair, although it was a distinct possibility at any time with his injury. One fall, one slip, one missed step is all that would be needed to end his hunting days forever. The year was 1977. Down in his back, as he would say, he was thinking of not going out that year. His friends all wanted him to go and after assuring him they would find a way to get him in the field to hunt he was convinced that he would go even if it meant staying in camp.

On the morning of opening day his friends drove him to a spot on top of a little ridge. It had a nice little gradual sloping trail leading down to a rocky ledge where you could see this small canyon that they had decided to hunt during their scouting trips. My father slowly made his way down the slope to rocks, that was as far as he was willing to go. There was a nice flat boulder right on the trail and sitting up high enough to offer itself as a seat. He settled in and started glassing the area. As time went by he could occasionally see his hunting buddies working themselves to a hunting position. Slowly everyone was settled and the waiting game began.

After several hours of glassing, my fathers back, now hurting pretty bad, was giving him quite a bit of pain and he was beginning to wish that he had stayed in camp and took his pain pills instead of trying to hunt. Unable to concentrate he decided to lay back on the flat rock that now became a bed. He fell asleep. Time passed as he slept and it was nearing sunset. A shot rang out in the canyon , startled he woke, pushing himself up he sat up and started to glass where he thought the shot came from. Soon, a second shot rang out. The shots were coming from the next canyon or maybe the next one, it was difficult to tell. It was not anyone in his hunting party shooting, so he watched the ridge in the direction the shots came from. Soon he saw a single deer slip over the ridge and into some thick brush. Slowly the deer made its way out, almost appearing to be crouching, it was keeping it head down. Then he saw it clearly, it was a buck, a nice one too! The deer made his way through the dense brush at the bottom of the canyon and popped out on the trail my father was on. It was then that he could see the actual size of the buck and its rack. Without a doubt, it was one of the largest bucks my father had ever seen in 30 years of hunting. His heart started pounding. The buck started picking up speed coming up the trail. My father raised the 30-06 he had on every hunting trip since WWII. As he looked through the scope of his rifle the buck was coming ever nearer. His heart pounding so fast he thought it would come out of his chest, my father could only see a huge patch of gray in his scope. The buck was now so close the scope was ineffective. turning his rifle to its side he looked down the barrel, took aim and fired. The buck dropped in mid stride and fell the ground, 30 feet from my fathers position on the trail. His trophy was secured.

At the time it was the fourth largest coues deer ever taken. Measuring in at 126 5/8. It has since dropped but still in the top ten, I believe. My father passed away in 1995 but his story still lives on and his trophy buck is mounted and in my possession. I have the Arizona Wildlife Trophies Award certificate, the Boone and Crockett certificate and the Arizona Wildlife Federation Plaque. He was asked to bring his deer to the B&C awards in St. Louis I believe it was but was unable to attend because of health problems that year. I cherish the trophy left to me by my father, almost as much as he did. 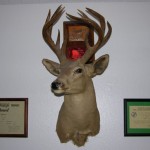 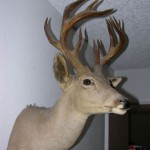 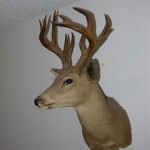 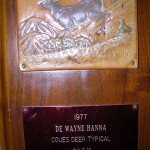 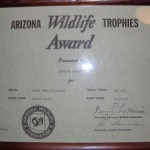 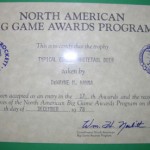