The day had finally come: the children are in a safe place with my mother-in-law, the dog has food and water, my husband, father-in-law and I are packed and ready to go. This was my first hunt and not only that but for Coues deer. With the help of my husband, who has been hunting since he first learned how to walk, he made sure that I had everything I needed. From Danner Pronghorn boots, camos, thermals, to a custom made 22-250 rifle. I was ready for what ever terrain, weather, or buck I was to come across.

Opening Morning: We (my husband Gabe, my father-in-law Richard, my Uncle Joe, my Uncle Bill, and Mario our family friend) were up at 4:00 a.m., a cup of coffee, dressed and ready to go. This was the first morning that I had been up so early ready for a day. I was so excited. Our family friend Mario took us to a location where he had spotted a couple of good bucks a few days earlier (the rest of the crew followed behind). We pulled down off a main road, parked, gathered all our gear and hiked about 2 miles in. We stopped hiking where we thought would be a good place to start glassing before sunrise. We were all settled in our spots. As the sun began to rise the sight was awesome. We had ridges all around us, a wash down at the base of the ridge, and mesquite trees scattered through out the area. It looked like Coues country. We began to glass the ridges. Mario spotted movement on the ridge in front of us. It was two does. The ridge was about ¾ of a mile away from us and for those of you who have hunted Coues deer they are hard to see unless they are moving. All of sudden he spotted two bucks running down the ridge towards us. We could tell that they were both good bucks. Once they reached the bottom of the ridge they disappeared down in the wash with the mesquites. We continued glassing. It was great that we were seeing activity. About a half an hour later to the right of us, below in the flat, my husband spotted the buck again. I saw him with my naked eye. I grabbed my rifle, threw myself on the ground, set up my bi-pod, tucked my rifle into my shoulder and had nothing but cross hairs in my view. As I was lying on the ground I could feel my pulse through my belly button, I was very nervous. Before I could get a clean shot, he disappeared again into the mesquites. It was such a “rush!” By this time the sun was up. The weather was beautiful; winds calm, sky was clear, and warm. We continued glassing….and glassing…..and glassing. It seemed as though all of a sudden all the action we were seeing suddenly just stopped and we were seeing nothing. It was the perfect time for a snack…..break time! We were unaware that there were horse stables back behind us with people going on horseback trail rides. I thought for sure our day of hunting turned into a day of watching horseback riders. We talked about going to the top of the ridge in front of us, or going to a different area because we were concerned that all the deer would get spooked and we didn’t want to waste a day. We decided to stay and wait it out. We glassed on and off all day. I was starting to get discouraged because it was now around 4:00 p.m. and we hadn’t seen anything since early that morning. I decided to rest my eyes. As I laid there resting my eyes I just asked the good Lord above that if it’s meant for me to take a buck today bring him out in the wide open. About an hour later my Uncle Joe glassed up the most beautiful buck. He was to the right of us up on the ridge. As I looked through the binos he looked like a three point. He was munching off of a mesquite tree. I had told my husband that I wouldn’t consider anything smaller than a three point. If I’m going to hunt, “Size Does Matter!” My husband, my Uncle Joe and I grabbed our gear and started on our way. My father-in-law Richard, my Uncle Bill, and Mario stayed behind glassing. My Uncle Bill had a deer tag as well but because this was my first hunt he decided to let me go on the first stalk. We were treading through some rough terrain; sticker bushes taller than me. It was a blast but boy was it was loud. We tried to avoid thick areas to keep quite but at times there was no way around it. I was worried that the buck was going to get spooked, but we kept going. We were at the base of the ridge at the last spot where we had glassed him up. My husband and my Uncle Joe pulled out their binos and began to glass…..they spotted a buck. I sat down and my husband gave me landmarks where the buck was standing. I tucked the rifle into my shoulder with nothing but cross hairs in my sight. I began scoping for the landmarks seen with my naked eye. I could hear my heart pumping out of my chest. I was nervous. “I got him!” I whispered. “He’s only a two-point!” He wasn’t the big buck we had seen earlier that morning. I moved my scope just a hair to the left and there walking up the ridge was the big boy. By this time not only was I going to have a heart attack but my eye was twitching like crazy. I followed him with my scope as he continued up the ridge. I was getting scared. He was close to the top and I didn’t want him to go over….just then he turned to the left, broad side, behind a mesquite tree. He continued walking slightly up the ridge, my husband made a buck grunt and he stopped…..there he stood broad side….what a perfect stance. I took a couple deep breaths to calm my nerves, as I squeezed the trigger the shot went off and I lost view of the buck in my scope. Before I could ask if I had hit the buck, my husband was jumping up and down saying “You got him…he’s down!” A perfect 250 yard shot dead in his tracks!

I couldn’t have asked for a better first hunt. I know this experience will be hard to top, but I am looking forward to many more years of hunting with my family and friends. I would like to take time to thank again a few people who helped make this awesome hunt possible: My father-in-law Richard Canizales, my mother-in-law Julia Canizales, my Uncle Joe Canizales, my Uncle Bill Canizales, our family friend Mario Carbajal and most of all to my loving husband, Gabe Canizales. 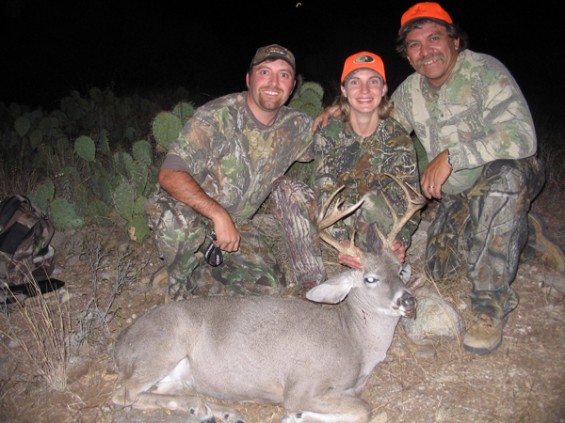 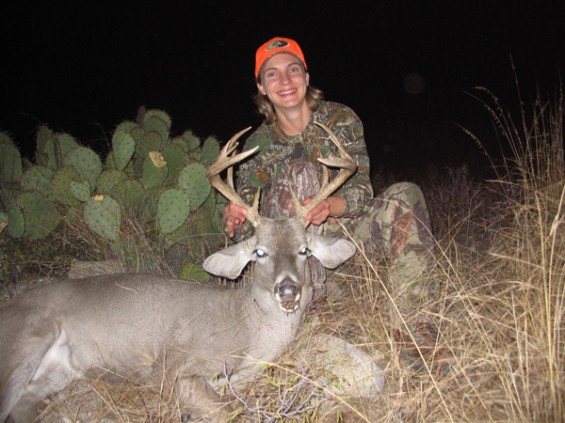