August 29, 2012 by loco4coues in Hunt Stories, Rifle Gallery with 0 Comments

I was 14 years old in October of 2000. This would be my fourth time hunting the elusive coues deer and I had yet to harvest a deer. In fact, I hadn’t even had the opportunity of getting a buck in my scope. We were hunting down south in unit 30A. It was the late October hunt and it was warm.  On opening morning Dad glassed up some does in some thick cover on a ridge across the road. After a closer look he could tell that one was a small 2 point. We packed up and headed over to try and get into position. Because of the location of the deer we were going to have to get on the same hill side that they were on to try and get a shot. We made it to a rocky out cropping that we thought would provide the correct angle to be able to see the deer and get a shot. Dad sat down and started to comb the thicket with his binoculars. After a few minutes he could see the legs of several deer as they fed in the thick brush. He had me start setting up for a shot while he tried to locate the buck. I settled into a sitting position using the bi pod legs on my rifle to get steady. By now Dad had located the buck and was trying to tell me where he was. As I searched for the buck through my scope all I could see was the thick brush. My dad directed me to a burnt bush that was all black and stood out from the all the green brush around it…I found it in the scope. He then directed me to the grey spot just above and to the right of the black bush…I found it in the scope. He told me that was the buck and that he was facing to the left with his head in the bush feeding. I found the bucks shoulder and put the cross hairs on him. I was shaking. The adrenaline was pulsing through me and I could not keep the cross hairs steady on the buck’s shoulder. I remember all the times we had practiced for this very moment and my Dad’s council to never shoot unless I was steady. My dad urged me to take the shot, because if the buck took one step he would be out of the small clearing and back into the thick brush. I concentrated on my breathing and focused on settling the cross hairs on the buck’s shoulder. As the cross hairs steadied I began to squeeze the trigger until…BOOOOMMMM…WHOP! I came down fast off the recoil of the shot searching frantically for the buck with my scope. “You got him!”, Dad exclaimed. “Dropped him like a sack of rocks.” I was shaking again, even worse than before. I had just harvested my first coues deer. My dad ranged the black bush the buck had been feeding near at 217 yards. We headed over to collect my prize. The 90 grain nosler ballistic tip from my .243 had worked perfectly. There was no blood trail to follow, he had dropped in his tracks.  What a memorable experience and the realization that I was addicted to hunting these little deer. Well, that was 12 years ago and I have since harvested 5 more coues bucks. I will try to get those posted as well. 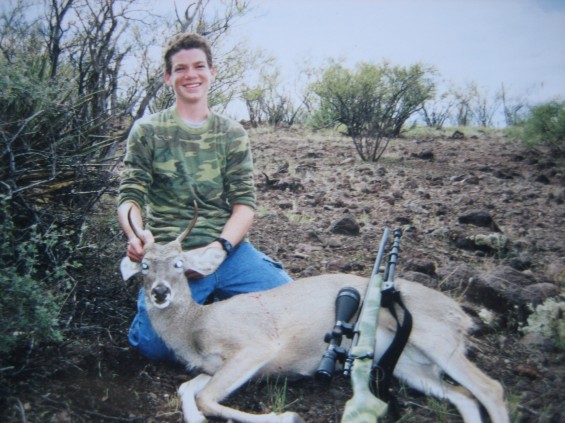