It all started when I didn’t get drawn for a deer tag once again this year. I saw that there were leftover tags in my area. I knew if this area hadn’t drawn out during the draw it was a hard hunt. I was skeptical to get a leftover tag in this area after getting topographical maps of the area but decided “A bad day of hunting is better than a great day at work”! I decided to take my chances and get a tag.

As opening day approached I needed to get back injections two days before to relieve pain from my dead discs in my back from a motocross crash 6 years prior. I was still a bit sore from the shots but that wasn’t stopping me from getting out in the outdoors.

I put in for my time off and headed South. I spent a day scouting before the hunt and only saw two does and many coyotes. I also ran across very fresh Lion tracks leading in and out of a water hole. After finding the Lion tracks I knew I was between a rock and hard place finding any number of deer. I was surprised I had seen the doe and fawn a few hours before. After Scouting for a few hours I made camp and set up my tent. It was a beautiful evening until about 11pm. I was all by myself and nobody was around for about 20 miles from what I’m guessing. I usually pick the hardest places to hunt knowing there are usually animals and no people around.

I was in my tent sleeping and I started to hear yipping and howling. I could hear coyotes all around me. I usually have a camp fire and that usually frightens them off all night but in this case I didn’t want to light a fire do to the 3 feet tall dry as a bone grass I was camping in. I knew if I lit a fire I would have a grass fire on my hands so I decided to pass on the fire. After a while of howling and yipping they quit. I went back to sleep only to awake an hour later with a coyote scratching on my tent and one in the back of my truck going into my cooler. In all the years of hunting I had never seen coyotes do this.

I unzipped my tent and started yelling. After I started yelling I had coyotes running everywhere. They never came back to my knowledge but I did find coyote crap in the bed of my truck and on my trailer where I had pitched my tent. I wouldn’t have believed it if it didn’t happen to me!! After a sleepless night I awoke at 5:45 and started packing up my quad.

It only took a couple mins and I was off. As I started down a road I had noticed a zip lock bag. It was my bacon and hot dog zip lock bag I had in my cooler. Those darn dogs made off with my food!!! I picked up the zip lock bag and kept driving down the road. As I crested a small hill I noticed the same doe and fawn I had seen the day before. They were bedded in the same area I had seen them feeding. I looked for 5 mins or so to see if they had any gentleman deer with them but they were all alone. I drove another half mile and looked up. There they were!

6 very nice bucks. One was extremely big and that is the one I was going to try for. I got my gun out and took a look to see if I could take the shot knowing it was at least a 300 yard shot. It didn’t take long to make up my mind or not as I watched the huge buck bound over the ridge. Darn! Then one by one they started going over. I knew I only had one shot and as I took aim and pulled the trigger. My gun Is sighted in for 300 yards and I hit about 10 feet below him. He jumped in the air and started to bound over the hill. I was so depressed I couldn’t believe I had missed. I realized the deer was much farther away than first thought. I was guessing about 400 to 450 yards after I shot. I was debating going after them or start looking for more deer down the road knowing they were going to run for miles after the shot.

Low and behold I looked up and the buck I had shot at came back and was looking at me on top of the ridge. I drew my gun again as he started to turn and put the cross hairs 2 inches over his back and pulled the trigger once again. There was no doubt this time. I heard the wallop.

The deer reared up and fell over backwards down the hill. As I made my trip up the hill I took many breaks from my back being sore from the shots. It was so hard to stop because I was so excited to see the buck but I just couldn’t go fast like the old days. As I approached the deer I was in shock to see how beautiful these desert deer are. This is was my first Coues Whitetail and was quit surprised to see how little they really are. I hooked onto the deer with my pull strap and the deer led me down the hill. I was packed up and home by noon on opening day. You can’t ask for anything better than that. I’ve attached a few pictures for your enjoyment.

One other note: I believe they need to put a bounty out on the Lions to increase the AZ deer population. Just my opinion. 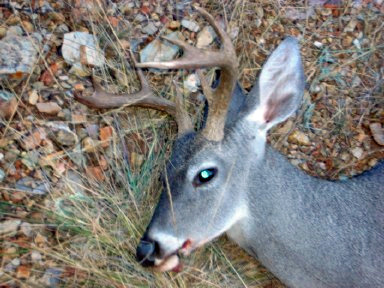 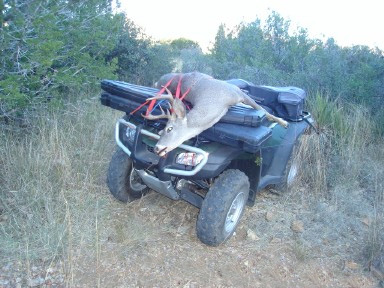 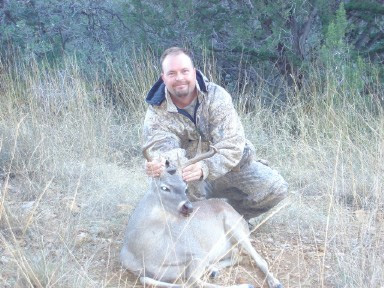