After a disappointing opening weekend I wasn’t feeling to excited when my dad came and woke me up at 3:45 A.M. When he told me where we were going, and how long of a hike it was to get there, I really didn’t feel too optimistic. The spot where we were headed was very secluded and not very many people are crazy enough to go in there, but my dad had been in there once before. We got to the trailhead at 5:30, it was still dark and we had to use flashlights to see the trail. About two hours and five miles later we stopped at a pond. Here, we split up. My cousin and my grandpa went up and to the left of the pond and my dad and I went to the right. We were headed towards a big rock. Once we got to this rock, we would sit and glass. We were almost there when my dad remembered a little side canyon where we could stop and take a break, while he looked around a bit. Around 9:30 I heard my dad say, “Buck”. Instantly my adrenaline was pumping and about a million questions flew through my brain. Next thing I knew I was setting up to shoot off of my dad’s tripod. When I finally found the deer through my scope I thought, “Wow this is going to be a really hard shot.” The deer was standing between two trees and a “Y” shaped branch was crossing his body. Right between the “Y” of the branch was his front shoulder. This meant that to make a clean shot I would have to hit between those two branches. After waiting an hour for him to step out or even move I gave up and crawled around to the other side of my dad. Here I had a clearer shot. When I was about to pull the trigger I thought, “Wow, this is really happening.” I pulled the trigger. While I was trying to load another shell into my gun, my dad was saying it was still in the same spot. It hadn’t moved! So, I shot again. This time the deer flinched. When he walked out though, he acted like nothing had happened. He walked down the ridge he was on, stood there, turned around and came right back up and stood behind a tree. All of a sudden he walked out a little bit, opened his mouth, and fell. I was so excited.

While we were waiting to go over there my dad said, “You just took a three hundred yard shot at a big deer with a little .223.” I was thinking, “three hundred yards are you serious, and just how big was it?” After a little pause he said, “Jaimie there were antlers sticking out of everywhere, you just shot a really big buck!” I hopped right up put on my pack and started down the hill. Nobody was going to stop me from seeing my very first deer and apparently my very first big deer. I kept hearing my dad telling me to slow down he’s not packing both of us, out but I just ignored him. Finally, we had reached the spot where I had shot him! I turned around to ask my dad where he had fallen and I had this strange feeling. So, I turned back the other way and almost had a heart-attack. There, lying no more than a foot away from me was the biggest deer I had ever seen. I almost fell over backwards and rolled back down the hill. It was amazing. I had shot a three by four whitetail. My dad kept saying over and over “you’re ruined”. I thought just get the camera out and hurry!

After we had gutted it we started the five mile pack out of there. It was dark when we got back to the truck. I was so tired but I just kept thinking, “Today was great! I shot my first buck at 10:30 in the morning and to top it all off it was BIG!” Unfortunately my cousin was unsuccessful in getting his deer, but his day is coming. 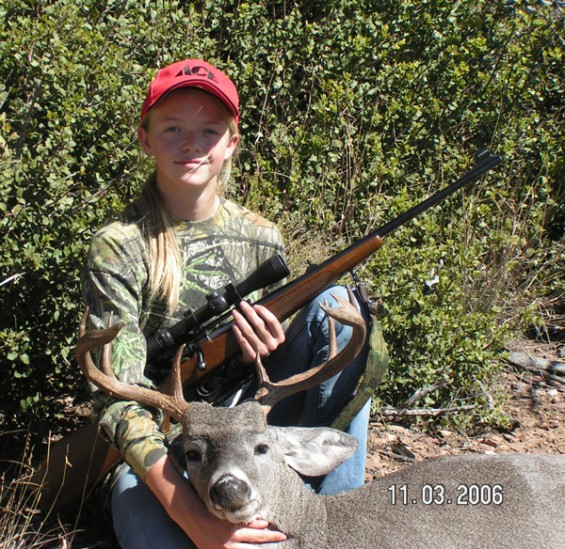 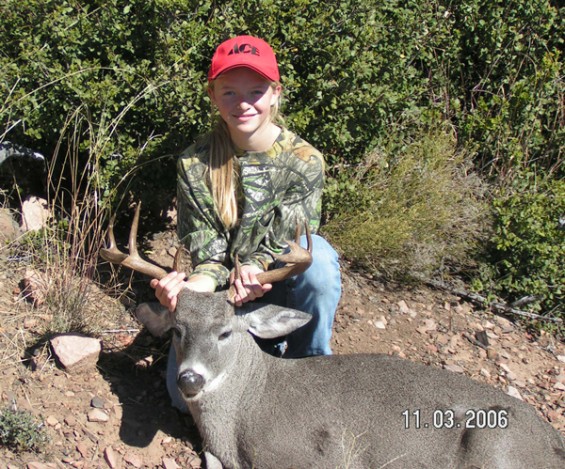 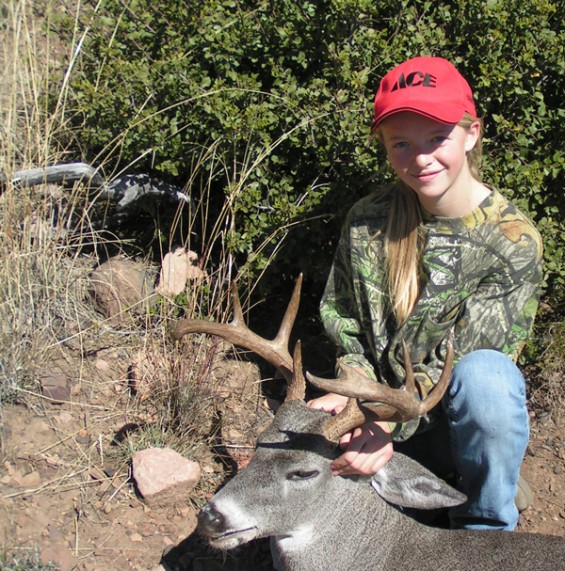 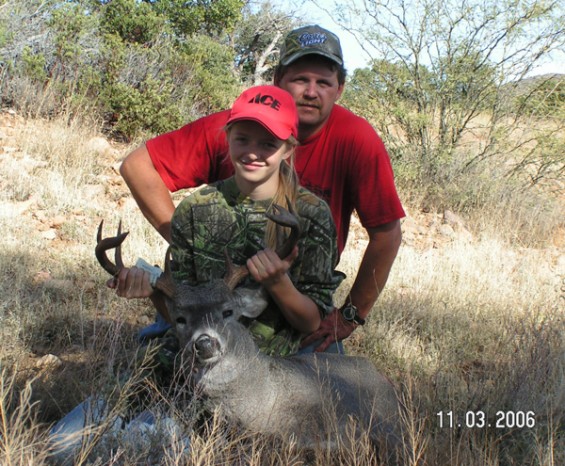