This is an accounting of my first hunting trip in Arizona, my first Coues and an unforgettable experience.

First I would like to thank all of you for your help, Amanda for this website and everyones unshelfish sharing of information, especially Chef. Thanks, ya’ll made my hunt successful.

My tag was for Unit 35A outside of Ft. Huachuca. I did a lot of scouting of trails leading up to the hunt date in order to pick a place to camp and hunt. When the time came, I had planned to start in one area and every couple of days move to a new location if things didn’t seem promising. As it turned out I spent my entire 4 days in one area.

Thursday the 11th I packed my Jeep and went to my first spot on the west side of the Huachucas. There were a couple of friendly old timers also camping there and advised me of the high UDA traffic in the area. I took their advice and set up camp near them instead of at the end of the 4×4 road (nearer to the hunt area) like I had originally planned. (Jack&Terry… if you are on here say howdy).

Up before dawn, my first day didn’t produce any deer sighings but did alter my hunt outcome and provided an experience I will never forget. As you know, there are numerous UDA and drug smuggler trails in this area, the extent was not apparant to me until I got off the road and saw how the hills are litterly covered with well beaten trails and trash everywhere.

About 11am that first day, I was taking one of these trails back to my Jeep when I discovered a body laying under a tree alongside the trail. At first I thought the person was asleep, but quickly noticed the purple and blue color of the legs and feet. I’ll skip the other details. The persons belongings were scattered about on the trail as if someone had pilfered through her stuff. Although well armed, I was wary that there might be others around, and not knowing what the circumstances of her being there were, I didn’t waste time getting out of the area. I took a GPS coorinate of the location and hurried back to my rig. Along the way I slipped on loose rocks and fell, smacking my vintage Husquvarna on rocks, putting a noticable ding in my stock and scratching the bluing on the barrel. The scope also took a hard knock. I then drove out to a point on 83 where I could use my cell to call the Sheriff and the BP. That night it was cold. It took several hours for the authorities to extract the body and I don’t envy the job those officers had to do in order to bring her body out, in the dark, in very rough terrain. I don’t think the Border Patrol Officers get enough credit for the fine job they do.

The next day I parked my Jeep in the same area. I had not gone 200 yards when I looked up at the first hill, and there stood a true monster Whitetail broadside, just looking at me. Now I know you all are saying… yeah, sure, uh-huh… well I have a couple of Eastern 6 & 8 point racks on my wall that measure 19″-20″ between beams, and this guy would be right at home up there with them. He was only 130 yards away and looked so big I first though he was a Muley.

I carefully checked the color, markings, horns, size and tail (what I could see of it from the side) and yup this was a trophy buck with a classic broadside shot. I moved slowly and sat down on the ground with my left knee up taking a solid sitting position with the cross hairs just behind the shoulder. I remembered that I had sighted in for 2″ high at 100 yd and slowed my breathing being concious not to jerk the trigger… The shot was crisp and the miss was clean!!

I quickly followed up with a Hail Mary shot but he was gone in an instant. I spent an hour covering that hillside looking for blood or some sign I had hit him. I couldn’t believe I had missed such an easy shot! Talk about being mad !! – this caused me to drive 50 miles to the nearest range to find out my scope had been knocked out 8″ left at 100yds! I re-sighted in and stopped at home to pick up a second rifle… just in case!

The next day I walked up on several does and they didn’t seem to pay much attention to me. A group of three allowed me to get within 20 feet before lifting their tails and _walking_ into the trees. Another doe watched me walk the hillside toward her as she browsed until I was about 40 yards away. She looked at me then back at the bush she was nibbling at, grabbed a mouthfull of leaves and trotted into the wash. How dare I interrupt her breakfast! I saw her come up out of the trees about 200 yds away, taking her time.

Later that morning, the wind was whipping at just under a gale. The grass was bent almost flat and taking any cross canyon shot would have been useless. I did spot a Whitetail bedded under a tree on the leeward side of the ajacent hill, but couldn’t tell if it was a doe or a spike. I assumed a doe and kept moving around the hill I was on. All of a sudden, 30 feet in front of me, in a group of trees a buck jumps and runs. I got a fleeting glimpse of his massive horns and their spread. That is the big boy I saw yesterday! In an instant I can se at least 4 tines on the right side – then he is gone – into a heavily treed draw. I wait to see if he comes out the other side or up the opposite slope – nothing happens – he is gone.

The rest of the day produces nothing, but about an hour before dark about 3 hills over, I hear a shot and then a couple minutes later, two more shots… I fear my monster buck has fallen to another hunter. I make it back to camp, by 7pm the other hunter still hasn’t come out and I am now sure he is gutting and dragging out my big buck!

Monday is my 4th day hunting the same area. I have decided that this will be the last day here if nothing develops. One other hunter took a forked horn the first day and that guy in the red Jimmy must have gotten ‘ol granddaddy.

I took a new trail back behind the hills I had been hunting. I pushed further up the mountain and deeper into the hills searching for the big score. I saw 2 Illegals come over the next hill. They didn’t see me at first. I kept walking along the topo at about the 5800’line. Eventually they spotted me and scurried up a steep hill and over the crest out of sight. At one point I could see my Jeep parked in the distance… and next to it was that red Jimmy… I knew he had missed! I glassed the surrounding hills and finally spotted him sitting on one.

The rest of the day was tiring, walking a lot of rocky slopes, gusting winds, rain and sleet and no deer anywhere. I went back to camp about 1pm exhausted and wondering if I would go out for the evening hunt. After a little while, the red Jimmy came driving out and I stop the hunter to jaw awhile. Mainly I am interested in finding out how big a buck he shot at the day before and if he hit it… heh heh. After a little conversation it comes out that he shot at an average 3×3 and thinks he grazed it because he found a chunk of hair and skin. He couldn’t find a blood trail and never did find it.

Woopie !!!! MY monster was still out there and undiscovered!!!! This fact bred new life into my tired feet – for about 3 minutes! I then decided that for the afternoon I would go sit by the nearby wash that had a little water in it – actually the only water anything nearby had in it. I parked my butt under a tree and started eating a summer sausage and crackers until I was full. I decided to close my eyes and enjoy the warm sunny late afternoon. WAIT… I told myself – your not out here on a picnic wake up!!!

As I opened my eyes I saw this little buck walk into the clearing 65 yards away! He wasn’t the monster I had been persuing the last 3 days, but he was a legal deer! I was watching him and trying to decide if I should take him or keep looking for Mr. Big when I noticed his strange behavior. He was putting his face down into the water and moving his head side to side slowly. I looked through my binoculars and saw that this was the deer the young fella had described shooting at the day before. The one thing left out of the story, that he wasn’t aware of, was that he had hit him in the lower jaw and tongue.
This poor buck was trying to drink with his jaw hanging down and tongue half severed and hanging by a thread of skin. I immediatly knew what I had to do, this animal couldn’t leave the area to die suffering under some bush. I squeezed the trigger and he never knew what hit him as the 110 grain .270 exploded his heart. It was the kids buck all right, as there was a bullet grazed across the top of his back where a chunk of skin and hair were missing. Another inch lower and he would have severed the spine and gotten this buck.

This was one hunt I will never forget, nor that monster White tail that is still out there…

(to read some more about this hunt, you can go to his post in the discussion forum). 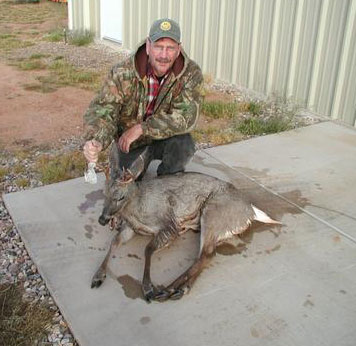