July 1, 2012 by CouesWhitetail in Hunt Stories with 0 Comments

We hunted in unit 36C during the Thanksgiving Hunt (new hunt). My Compadre Pico, good friend Carlos, and I hunted the unit extremely hard. We got into bucks almost everyday we were out. On Monday the 1st, I stayed by the truck while Pico and Carlos went over to check a good glassing spot with the arrangement that they were coming back in a while. As I started to glass the hills to the south I started picking one doe here and there. At about 8:07 am, I was about to move my glasses to glass another area when I spotted a nice buck coming down the hill and then I spotted another. I was trying to figure out a plan to get closer to the bucks as I looked through my binoculars. I took my rangefinder and ranged the bucks as they were in a cut approximately 628 yards from me. I knew that the bucks were looking to bed since it was getting warm. I just stayed focused on the bucks. The big buck bedded at 8:45 am and then the smaller one just fed and started to get farther away from the other. I started wishing the smaller buck would bed so I can start the stalk. At 8:58 am the smaller buck fed next to a big mesquite tree and bedded there. I started to call the guys over to the truck to tell them the news. When the guys finally answered the radios I told them they needed to come back to the truck because I had found some bucks.

The guys came over to my spot and asked where the bucks were while they are setting up their binoculars. I started to explain exactly where the bucks were using landmarks (i.e. rocks, trees, cuts, yellow grass). I finally put them on exactly where each buck was and the planning started. Pico would stay back and keep an eye on the bucks while I went and set up for a shot at the bigger buck and Carlos would get to a rock out-crop above the smaller buck. An hour and a half later, I was sitting exactly where I wanted to be and I started to get my equipment so I can glass from that spot. I ranged where I could see the rocks where the bigger of the bucks was but I could not see the buck. The rangefinder read 407 yards from my location since I could not get any closer. I started to range different locations just in case the bucks got up and ran. As I ranged different locations on the hill, Carlos was on the radio and asked if I could see him. I answered him and said that I could see him and the tree where the smaller buck was. I told him to start glassing the area and look for the buck. He told me that he could not see the buck under the tree and asked if the buck was next to the prickly pear cactus. I answered him that the buck was on my side but yes he was on the same mesquite and cactus. I then told him to eat lunch and told him that we would wait out the bucks until they got up. Carlos was approximately 233 yards from his buck. As I glassed the area where the bigger buck was I thought I saw an ear flicker and I was right as Pico called on the radio to tell me that the bigger buck had moved and that he was looking back up the mountain. I still could not make him out or how he was bedded but I could see his rack, the ocotillo, and surrounding bushes next to him. The waiting game started and I was trying to stay calm while the other guys every so often would call to check up on each other.

At 1:10 pm the radio came on and it was Carlos to tell me that something spooked my buck and that he was trotting towards me and he was in the cut. I located the buck as he was weaving through some thick stuff and was getting closer to me. I found a shooting lane right below my location that I had ranged earlier to be 213 yards. I told myself that the buck would stop there to look back up the mountain and that I would shoot at him there. The buck stops at that exact spot and I shoot, the buck is hit in the left front of the shoulder and goes into a mesquite thicket. I can only see the buck’s right shoulder and is about to go down when I shot him again this time I hit him in the right top shoulder. The buck goes down and I’m excited as I try putting my stuff in to my back pack. Carlos is on the radio telling me that the buck got up again and that the buck is looking at me on the hill right in front of me. I drop my back pack and picked up the rifle only to see the buck go down again as I shoot. The buck is trying to get up and is in some cat claw trying to get back up. I can’t see the buck completely but I can see his rear and legs. Carlos is trying to tell me to shoot again but I don’t see the buck getting up again. Carlos is telling me that the buck is finally down and he is not moving anymore.

I’m excited and can’t wait to reach my buck. As I start heading towards my buck I totally forgot that there were two bucks and Carlos calls to me and asks if after the shooting if his buck still bedded under the mesquite. I set up again and glass the tree and cactus and I tell him that the buck is still there. I ask Pico for confirmation and he tells us that the buck is still there but there is another hunter coming down the mountain. I tell Carlos to get ready that the buck will bolt at any time. I start telling him to get his stuff and start heading towards the tree. During this time, I am looking at that other hunter and he doesn’t even see Carlos and I doubt if he even knew the buck was there. The other hunter is in the same cut my buck came out of and that is when Carlos’ buck came out. The buck is heading straight away from Carlos and I’m telling Carlos to shoot. I see him point his rifle towards the buck but he is not shooting. The buck is now more than three hundred yards from Carlos and he’s still not firing. As I saw the buck go up and over the ridge, I’m asking Carlos why he didn’t shoot. He told me that the rifle jammed on him. When I get to my buck he is coming to me and tells me that he had never chambered a round so he was trying to shoot with an empty rifle. After the excitement he had forgot to cycle a round and only then did he realize what had happened.

I am happy that the buck was bigger than I had anticipated. I guessed he would go around 105” but he grew somewhat after I took him home and put a tape on him. We measured him to be around 110 and change but after drying he will net probably 109 or 108.

Both my buddies are grateful that we got one but they are excited for next year if we get drawn. Thinking back on the buck that got away, we should have waited the buck a bit more but some things you just take how they develop and don’t foresee our mistakes until after the fact. 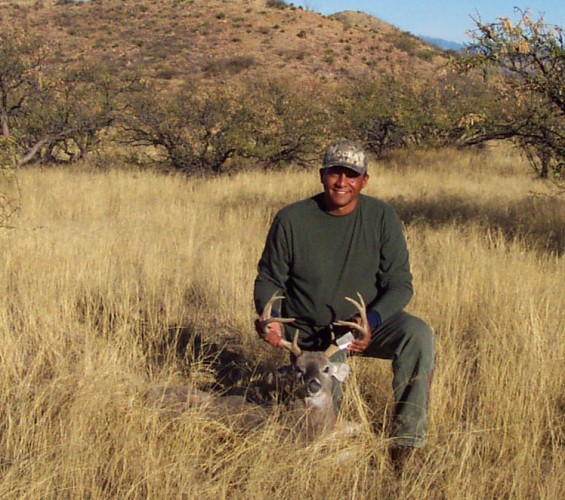